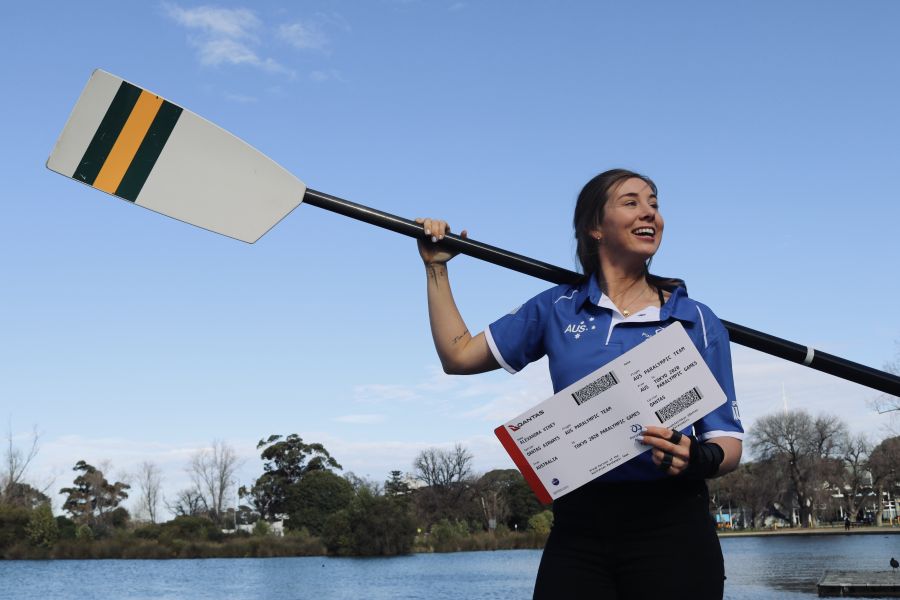 After having to overcome so much adversity, the Tokyo 2020 Paralympic Games are finally here! Our Paralympians serve to remind us that anything is possible.

The Victorian Institute of Sport (VIS) is proud to announce that 31 of our scholarship holders have been selected to represent Australia across 10 different sports in Tokyo. The 2020 Paralympic Games officially opens tonight and will run until September 5.

Here are some of the VIS scholarship holders to keep your eye on, and the key events to follow:

Australia’s para-athletics team is full of talent and will include seven VIS scholarship holders, including world record holders and athletes that will become dual Paralympians.

One of those athletes and someone who should be on the top of your watch list, is dual world record holder Jaryd Clifford. Clifford, who is a visually impaired athlete and competes in the T12 1500m, 5000m and Marathon events, will be heading to Tokyo with one thing on his mind – Gold.

Supported by his guide Tim Logan, Clifford has come along way since he first made his Paralympic debut in Rio 2016 as a 17-year-old where he placed seventh in the 1500m and 5000m.

In 2019, Clifford became a dual world champion in the 1500m and 5000m event, before recently “accidentally” breaking the marathon world record in Sydney. Ironically, Clifford admits that his favoured event, the 5000m is the only event in which he does not hold the world record. So will Tokyo 2020 be the year that Jaryd win his first Paralympic gold medal, and hold all three world records?

Another athlete who currently holds the T35 100m world record is sprinting sensation Isis Holt. Holt placed second in both the T35 100m and 200m events in Rio 2016 behind China’s Xia Zhou. The two will again square off in Tokyo and Holt is primed to better her silver from Rio.

Sam McIntosh is set to compete at his third Paralympic Games in the men’s T52 100m and 400m, whilst Nicholas Hum will become a dual Paralympian when he competes in the men’s F20 long jump event. Maria Strong will make her Paralympic debut in the seated F33 shot put, as will first-time Australian representative Michal Burian in the F64 javelin throw.

You will be able to watch our track and field athletes compete from Friday August 27 to Sunday 5 September.

Having only been introduced as a Paralympic sport for Rio in 2016, Australia has already won three medals and will be looking to add to the tally at Tokyo.

VIS scholarship holder Amanda ‘AJ’ Jennings will be looking to add to that medal tally, and hopefully fall on the right side of the photo finish at Tokyo in the women’s kayak KL3 event, as she was 0.003 seconds shy of gold in Rio.

For most of her life, ‘AJ’ lived with chronic pain, depression, and an addiction to prescription medication before she bravely decided to amputate her right leg through the knee. She hoped that this would improve her quality of life, and after discovering Para-canoe in 2012, she realised just how incredible her new path could be.

And, although 2019 did not go to plan out on the water, battling several different injuries, the 49-year-old will be well in the medal hunt at Tokyo.

Arguably one of the most decorated and motivational figures in Australian sport, is three-time Paralympic gold medallist Carol Cooke. Already a 9-time World Champion, Cooke will look to add to her medal collection at Tokyo 2020.

Diagnosed with multiple sclerosis in 1998, Cooke took up para-rowing in 2006, in which she narrowly missed the Beijing 2008 Paralympic Games, before she finally found her calling in the sport of para-cycling. In 2012 she made her Paralympic debut in London and won gold in the mixed time trial T1-2 event. Four years later in Rio, she went on to win two gold medals in the T2 women’s individual time trial and the road race.

With the competition stronger than ever at Tokyo, Cooke is ready and raring to defend her Paralympic titles, and if anyone is up for the job, it’s Carol.

Another athlete to watch with great excitement will be Alistair Donohoe, as he returns to the cycling track with one thing on his mind – redemption!

In Rio, Donohoe won silver medals in the C5 men’s individual pursuit (track) and the time trial (road). But it’s the men’s road race that he will be looking to make a statement in.

You can watch Alistair Donohoe and Emily Petricola on the track from Wednesday August 25 until Saturday August 28. The road cycling will commence the following week from Tuesday August 31 to Friday September 3.

Emma Booth’s equestrian ambitions were put on hold in 2013 when she was involved in a near-fatal car accident, causing paraplegia. She spent seven months building up her strength to return riding again, inspired by her love for horses. Learning of her options as a para-athlete, Booth set her sights on selection for the Rio 2016 Paralympic Games, where she placed fifth in the mixed dressage and ninth in the team event.

In Tokyo, Booth will be riding her own horse Mogelvangs Zidane, and will be supported by groom Shahira Ameen in her quest for a Paralympic medal.

You can watch the para-equestrian competition from Wednesday August 25 to Monday August 30.

Alexandra “Al” Viney was a promising young rower throughout her high school years, before a high-speed car accident caused by a drunk driver, nearly ruined her sporting ambitions.

Believing her time as an elite athlete had passed, Viney was asked if she had ever considered para-sport. Unaware of this option, she sat in a boat for the first time eight years after her accident, and her rowing journey continued.

In 2019, Viney was selected for the Australian Senior Para-Rowing Team in the PR3 Mixed Coxed four, where they placed second at the Gavirate International Para Regatta. Months later the team placed fourth in the world at her World Championships debut.

With minimal opportunities over the last couple of years to compete, the crew will be a great unknown, but will certainly be a boat to look out for.

You can watch the para-rowing when it commences on Friday August 27 and concludes on Sunday August 29.

Col Pearse will be one to keep your eye on in Tokyo, he will be competing in the men's S10 100m Butterfly, 100m Backstroke and the 200m Individual Medley.

Pearse had his right foot amputated from below the ankle at age two following a collision with a ride-on lawn mower. He first made his senior Australian debut in 2019, competing at the London Para World Championships, where he won a bronze medal in his favoured 100m butterfly event.

Pearse’s journey to Tokyo has been quite unique, as the closure of swimming pools in 2020, due to COVID restrictions, forced him to think outside the box.  As a result, he decided to return home to his family’s dairy farm in Echuca, where the family built a “home-made” swimming pool in the farm’s dam.

You can watch Pearse compete on Tuesday August 31 in the men’s S10 100m butterfly event.

Having just completed her second Olympic Games campaign, Melissa ‘Milly’ Tapper is ready for her third Paralympic Games. Tapper will help lead the Para-table tennis team as co-captain, that collectively have high aspirations at Tokyo. Tapper has finished fourth at her last two Paralympic Games and aspires to go even better at Tokyo and help secure the nation’s first gold medal in the sport for nearly 40 years.

The addition of three multiple gold-medal winning former China representatives in Australia’s para-table tennis squad, will help on that quest for gold.

VIS para-table tennis scholarship holders Ma Lin, Lina Lei and Qian Yang, already have 10 Paralympic gold medals and six silver medals between them.  So perhaps Tokyo will be where the sport’s gold medal drought comes to an end.

You will be able to watch our para-table tennis athletes compete in Tokyo from Wednesday August 25 to Friday September 3.

There is no doubt, that one of the most exciting moments of the Games will be when Australian Roller’s star Tristan Knowles takes the court at the Paralympics for a fifth time.

Knowles will be eyeing off another top spot on the podium in Tokyo to add to his gold medal from 2008, and silver in 2004 and 2012. He will be joined by fellow VIS scholarship holder, Jeremy Tyndall in the squad of 12.

The Australian women’s wheelchair basketball team, the Gliders, will end a nine-year absence from the Paralympic Games when they take on hosts Japan in the opening match of Tokyo 2020 on Wednesday. After claiming the silver medal at London 2012 the Gliders missed out on qualifying for the Rio Games in 2016. VIS scholarship holders Bree Mellberg and Isabel Martin will both make their Paralympic debut at Tokyo 2020.

The wheelchair basketball will run from the opening day until the closing day.

Australia’s wheelchair rugby team, the Aussie Steelers, will be vying to win their third consecutive Paralympic gold medal at Tokyo 2020, having won gold at London 2012 and Rio 2016.

The final scholarship holder that will make her Paralympic debut and create history along the way is Shae Graham, set to become the first female athlete to represent the Steelers at a Paralympic Games.

You can watch the Wheelchair Rugby from Wednesday August 25 to Sunday August 29.

Dylan Alcott will be one of the biggest names to compete at Tokyo 2020 and for good reason. Alcott is most well-known for the 21 grand slams that he has already won in his incredibly inspiring career.

Alcott will be looking to defend his quad singles title from Rio and will team up with fellow VIS scholarship holder Heath Davidson in the quad doubles to defend their title.

The wheelchair tennis tournament is set to commence on Friday August 27 and will conclude on Saturday September 4.

The Paralympics will be broadcast on free-to-air TV on Channel 7. Coverage will be spread across the network’s three channels: 7, 7TWO and 7mate. Seven will also be live streaming the Games via their website and the Paralympics on 7 app.

The official Tokyo 2020 website is the place to go for a full rundown of what events are taking place when. Click here to check it out.

To follow all Australian athletes, results and schedules, connect with Paralympics Australia.

There will be no spectators at the Paralympics due to the on-going COVID-19 situation in Tokyo, but just like the dramatics of the Olympic Games, you can expect an incredible couple of weeks of overwhelming joy and nail-biting anxiety, and every emotion in between.

Congratulations to all VIS, Victorian and Australian athletes selected and good luck! LET THE GAMES BEGIN!