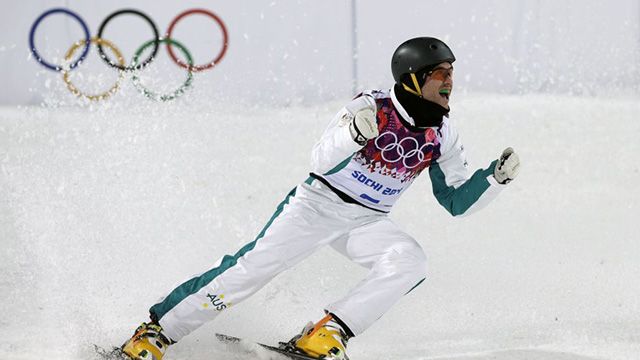 If Lydia Lassila's Olympic bronze was a win for the brave, then David Morris' silver medal was a success for the shrewd.

Going first in the four-man final he put down a neat quad-twisting triple somersault (110.41 points) but then Australian hearts sank as he was blown away by Anton Kushnir (134.5) with a quin-twister the very next jump.

However the Belarusian’s high-end marker put immense pressure on the two Chinese jumpers, Jia Zongyang (95.06) and Qi Guangpu (90) who failed to nail their landings and handed Morris the silver.

The beaming 29 year old, who was fist pumping and smiling all the way from qualifying through to his podium place, was reasoned from the get go.

His qualifying jump was “the best one I’ve done all year” and he came through in second place, but the nerve-jangling really came in the first final where he downgraded his jump in the hope of saving his better tricks for the last two finals.

“Strategically that was the right move and I was questioning at the time: do we really want to do this,” he admitted.

It has been a remarkable journey for the effervescent Morris. For years he was a lone male wolf in the sport of aerial skiing, which was dominated by women in Australia.

He finished 13th in Vancouver four years ago and then walked away from the sport for a year, but persevered and came back to compete in Sochi.