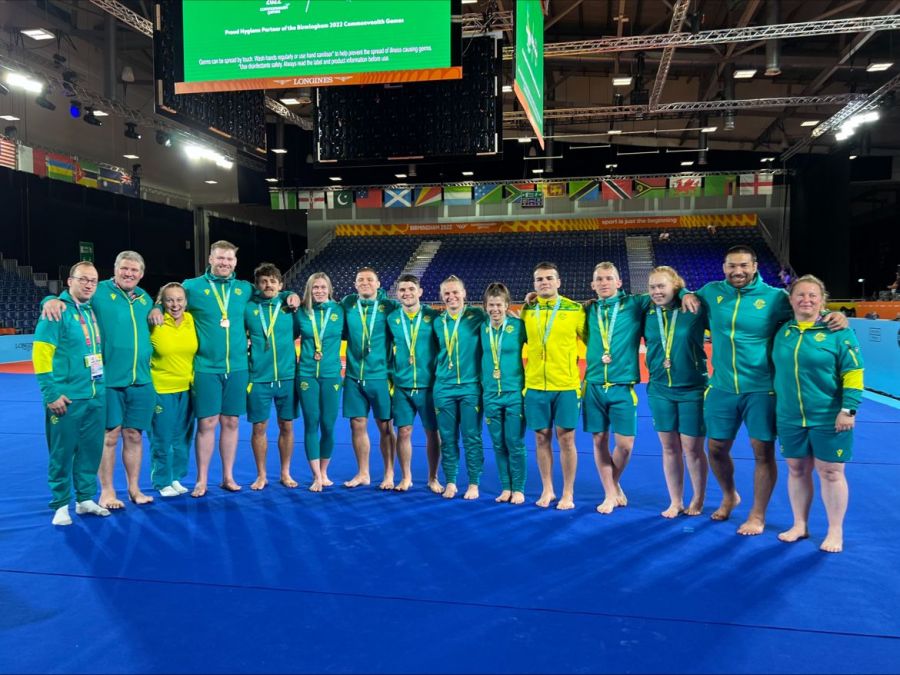 Ten medals, two gold and eight bronze, is the most ever won by an Australian judo team at the Commonwealth Games.

Team Judo Australia capped off a historic effort at the 2022 Commonwealth Games in Birmingham, bringing home 10 medals, the most for any Australian judo team at a Commonwealth Games. The two gold and eight bronze medals were enough to see the team finish the competition in 3rd place behind host nation England and runners-up Canada.

Tinka Easton became only the third Australian to win a gold at the Commonwealth Games when she defeated Canada’s Kelly Deguchi in the women’s 52kg final. The 26-year-old Victorian had two Shidos (penalties) to Deguchi’s one and appeared on the ropes before pulling off an Uchi-mata to seal the victory in the golden score period.

“It’s something I’ve been dreaming about for the last few years so it’s very exciting to make it happen,” she said.

Josh Katz added to the medal tally after he defeated Zambia’s Simon Zulu by Ippon with an excellent seoinage to claim bronze in the men’s 60kg.

“I was here for gold but I’m still excited to come away with a medal for Australia,” he said.

Nathan Katz, brother of Josh, capped off Australia’s perfect first day when he claimed a hard-fought victory by Ippon with a Tai-otoshi over Jasleen Singh Saini in the men’s 66kg.

“I hadn’t won a match before today since Tokyo 12 months ago so there was a lot of pressure to perform but I did show that I’m at this level and I can win medals internationally, so I’m really happy.” He said.

The clean sweep of Day 1 was complete with one gold and two bronze medals on the board.

Aoife Coughlan opened Australia’s Day 2 campaign by claiming gold in the women’s -70kg division. This was the second gold for #TeamJudoAus in Birmingham and only the fourth gold medal in history for Australia at the Commonwealth Games.

The 26-year-old had Ebony Drysdale Daley scrambling from the outset. The Jamaican judokas non-combative tactics led to a third shido penalty which handed Coughlan the win in the golden score period.

“I knew I had to pick up the pace and push here, make sure I was ahead of the game and make sure she made some mistakes,” Coughlan said of Jamaica’s first judo Games medallist.

“She is a very tough fighter, but I got there.”

Two-time Olympian Katharina Haecker was next to reach the podium for Australia when she scored two waza-aris against Jamaica’s Lauren Semple, in their women’s -63kg bronze medal match.

The German-born judoka whose father is Australian was disappointed not to win gold but was grateful for the opportunity to represent and win bronze for the green and gold.

“I love Australia, I feel very Australian. I’m proud to be German and Australian but Australia gave me a chance to represent Australia and I will forever be grateful for that.”

Next, Jake Bensted wasted no time in his bronze medal match taking only 73 seconds to beat Northern Island’s Joshua Green with a shime-waza to force a submission.

With his victory, Bensted became the first Australian judoka to medal at two separate Commonwealth Games adding this bronze medal to the one he received at the Glasgow Games in 2014.

“It’s always a bit nerve-racking with the medal fights, so to be able to get it over and done quickly was very nice,” said Bensted.

The last Australian competitor for the day was 21-year-old Uros Nikolic, the youngest member of the team, who claimed bronze with a waza-ari in the golden score period against Eoin Fleming of Northern Ireland. This was the young Australian’s first senior international level medal and one he’ll always remember.

“To get my first international senior competition medal at the Comm Games is amazing,” said Nikolic.

Harrison Cassar was the first to reach the podium on Day 3 with a strong performance against Marius Metois in the men’s 90kg bronze medal match. The 24-year-old was quick to dispatch the judoka from Vanuatu in just 38 seconds winning by Ippon.

The former cadet world number 1 Abigail Paduch added to the medal tally for Australia when she scored an Ippon against Gabriella Wood of Trinidad and Tobago in their women’s +78kg bronze medal match.

Liam Park capped off the night by claiming the eighth bronze medal, tenth overall, for Australia after he defeated England’s Harry Lovell-Hewitt in the men’s +100kg bronze medal match.

The #TeamJudoAus Seniors will have a quick break before heading back to Europe for a training camp to prepare for the World Championships in Tashkent, Uzbekistan, 6 – 13 October 2022.

The #TeamHJudoAus Kata team will head to Krakow, Poland to compete at the Judo Kata World Championships on 13 – 14 September.