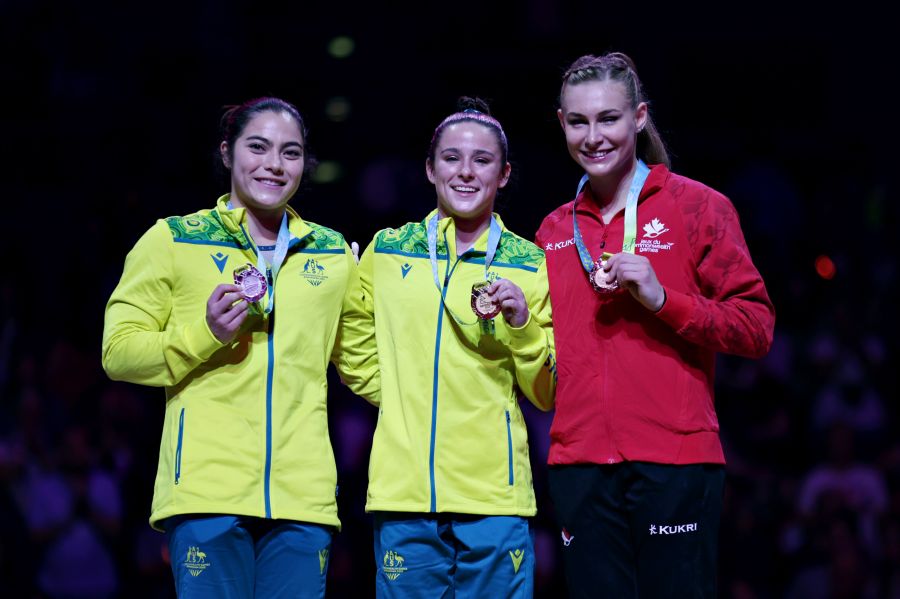 Young gun Kate McDonald has pulled off the performance of her life to win Commonwealth Games beam gold on a day where Australia’s artistic gymnasts claimed five medals.

McDonald edged superstar teammate Georgia Godwin, who won her fifth medal in Birmingham, for her breakthrough gold while Emily Whitehead won bronze in the floor.

Tyson Bull claimed silver in the high bar after initially failing to qualify for the final, while James Bacueti claimed bronze in the vault.

It took Australia’s gymnastics medal total to nine, after Godwin had earlier claimed two gold, a silver and team silver.

Godwin looked poised to claim her third gold in Birmingham when she laid down 13.433 first-up.

“She put up the performance of a lifetime when it counted, so she deserves the gold,” Godwin said.

“I just tried to put everything on the table and wow, what a result,” McDonald said.

Godwin concludes her campaign with all-around gold and vault and uneven bars, beam and team silver.

Her five medals in Birmingham and three on the Gold Coast make her Australia’s equal-most decorated women’s artistic gymnast, alongside Allana Slater.

“It’s an actual honour. Allana is an incredible gymnast. She’s been messaging me congratulations,” Godwin said.

“So to be up there with her, it’s going to take some time to sink in.”

Bull’s high bar routine scored 14.233, which was only surpassed by the final competitor, Cyprus’ Ilias Georgiou (14.466).

Bull, who finished fifth at the Tokyo Olympics, bombed out in his pet discipline in Birmingham, finishing 13th in the team event and individual qualifying due to a poor landing.

He earned a reprieve when Jesee Moore withdrew with a shoulder injury and Clay Mason Stephens opted out to open up a spot.

“Clay Stephens having the biggest heart in the world, (it was) just such a selfless act for him to offer that spot to give me a chance on my pet event,” Bull said.

“There’s no chance I was making the same mistake twice. I was gonna put it on my feet no matter how much it hurt.”

She was penalised for stepping outside the line, a 0.100 deduction that ultimately proved the difference between silver and bronze.

Morgans and Bull finished fifth and eighth respectively in the parallel bars.