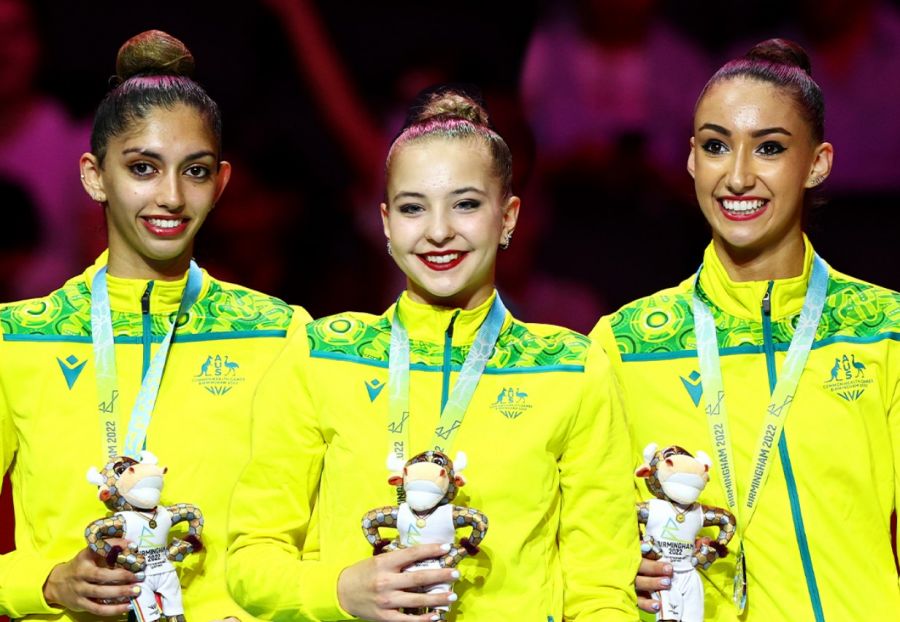 ​In a wonderful performance, the Australian trio captured the silver medal in the Rhythmic Gymnastics team competition at the Birmingham 2022 Commonwealth Games.

Australia’s rhythmic gymnasts have hit all the right notes to claim Commonwealth Games team silver on their first night of competition in Birmingham.

“We all came through a very long journey to get here,” Kiroi-Bogatyreva told reporters.

“We all had a few mistakes, a few errors, but we can work on that for all-around and for finals.

“As a team, we did well, we all fought for the silver medal and we got what we got and now we just have to keep working and keep getting better.”

The final act, with Australia all but locked in for silver, was Gill’s ribbon routine, to the tune of Sonny Bono’s ‘Bang Bang’.

Gill’s entertaining routine scored 25.200, but ultimately ended up being one of the two lowest scores dropped from the final score.

But Australia’s nigh t still finished with a ‘Bang Bang’ as they upgraded their Gold Coast bronze.

“It’s quite a magical moment and I’m glad I get to share it with these amazing girls,” Gill said.

Kiroi-Bogatyreva is the only gymnast remaining from the Gold Coast team, where she was also ball bronze medallist, and clearly led the way on Thursday night.

The 20-year-old earned the top score in ball, second-best in clubs, fourth-best in ribbon and qualified fourth for Friday’s all-around final.

“We’re getting bigger and bigger each time,” Kiroi-Bogatyreva said of upgrading her team medal to silver.

“So maybe all-around and finals you might expect something else.”

Kiroi-Bogatyreva also earned the unique honour of becoming the only gymnast to compete at two different Birmingham 2022s – the Commonwealth Games in the UK and the World Games in the USA.

Iakovleva, who also qualified for the all-around, got Australia off to a strong start when she finished seven th in the hoop (26.900), earning qualification to the apparatus final.

“That we won silver is just amazing, we all worked so hard for it,” she said.

“I don’t think I’ve done my best for today but hopefully (the all-around) tomorrow will be better.”

The highlight for Australia came when Kiroi-Bogatyreva scored 29.100 with a tremendous ball routine, earning the top-qualifying score.

Kiroi-Bogatyreva won plenty of love from the Arena Birmingham crowd when she completed her clubs routine to a Beyonce melody.

The judges loved it too, handing her a score of 29.300, the second-highest overall.

The all-around event is on Friday with individual events on Saturday.