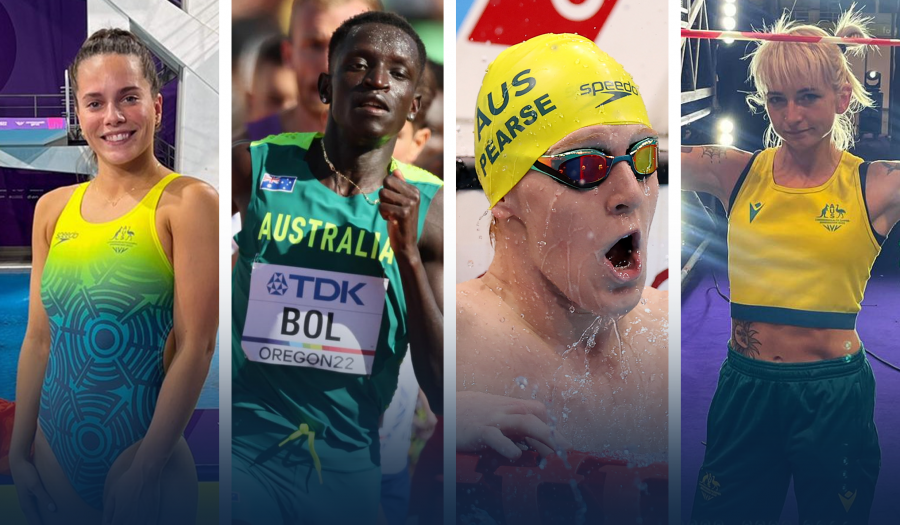 The Birmingham 2022 Commonwealth Games have arrived and although Melbourne is 9 hours ahead of Birmingham, there will be plenty of action worth setting your alarm for!

With an 11-day action-packed schedule, we preview some of the Victorian Institute of Sport scholarship holders you don’t want to miss.

Want to know when your favourite sports are happening? Channel 7 has set up this interactive schedule here.

What a journey it’s already been - two bronze Commonwealth Games medals, two bronze World Championship medals and an Olympic bronze medal. Will Birmingham be the year Smith wins a different colour? – her recent result (bronze) at the World Championships with synchronised partner Maddison Keeney suggests it could be.

Bull made gymnastics history at the Tokyo Olympics, becoming the first Australian to make an Olympic men’s artistic gymnastics final, finishing fifth in the horizontal bar. Being the only Commonwealth representative to have made that final, he will be one of the favourites when he hits the bars in Birmingham.

Artistic Gymnastics begins on Day One

Pearse continues to get better and better. A bronze medal at the Tokyo Olympics in the 100m Butterfly S10, upgraded to silver in the same event at the recent world championships. With his Italian competitor not racing at the Commonwealth Games, Pearse will start favourite ahead of teammate Will Martin.

Swimming begins on Day One

Montag is ready to add a 10km race walking Commonwealth Games title to her 2018 Gold Coast 20km race walking title. After just recording her best result at a major championship – 4th at a World Championships – she proves the one to beat in Birmingham.

One of the inspirational stories that came out of the Tokyo Olympics was Bol. He won the hearts of Australia with his Olympic semi-final victory and courageous 800m final run, finishing fourth. He’s shown he’s close to that type of form, making the final at the recent world championships.

New Kids on the Block

Both 17-years of age, Lum and Luu will make their Commonwealth Games debut in Birmingham. Lum is an exciting prospect who has already recorded some impressive world results, whilst Luu has shown his potential at senior level, recording a sixth place at the Australian trials for the 2020 Tokyo Olympics.

Table Tennis begins on Day One

When Melissa Wu burst onto the diving scene at the 2006 Melbourne Commonwealth Games, 14-year-old Petrov wasn’t even born. In Birmingham they pair up in the 10m platform synchronised event, where they will be one of the medal chances, especially now Petrov has had a taste at international level, placing 7th at her first senior World Championships.

Born with a congenital limb difference, leaving him with a shortened left forearm and no fingers or thumb on his left hand, Jordan’s story is inspiring. The youngest member on the athletics team, Jordan heads to Birmingham on his first overseas trip. He will compete in the 100m T47 category classification, hoping to become the first Australian to claim gold in the event.

Alessia McCaig will make her Commonwealth Games debut after producing a range of junior Australian and Oceania sprinting records and titles over the past four years. Selected in four different sprint events on the cycling program, she will be sure to get her moment on the big stage.

Track Cycling begins on Day One

Returning from a career-threating knee injury, Buschkuehl has put together one of her best jumping seasons to date. Fresh off a new Australian record (7.13m) and another World Championship final, she will aim to turn her 2018 Commonwealth Games silver to gold when she hits the runway in Birmingham.

Katz brothers are on a mission to win a gold medal each on the same day of the Commonwealth Games, in their respective weight categories. The pair have had to overcome their own adversities to make their Commonwealth Games debut, with Josh bouncing back from the disappointment of missing Tokyo Olympic selection and Nathan rehabbing a troublesome knee, a few weeks prior to flying over to Birmingham.

From injury setbacks and missing national selection on multiple occasions, Harris has experienced all the highs and lows of elite sport. But heading to Birmingham things have started to fall her way. She was announced captain of the boxing team which is a credit to her hard work and determination.

Boxing begins on Day One

A remarkable 49-year-old mother of two who has won seven Commonwealth Games medals (four silver and three bronze) since her debut for Australia in Manchester 20 years ago. In Birmingham, Lay will again be one of the main podium chances.

Table Tennis begins on Day One

Looking for revenge and currently ranked No.1 in the world, the Aussie Diamonds will be hot favourites to win gold. But to overcome England who they suffered a heartbreaking one-goal loss to at the 2018 Games, they will have to bring their A-game to every match. With just four of the 12-strong squad that was sent to Gold Coast in 2018, newly appointed captain, Lizzy Watson, will be wanting to lead the new-look team to gold in Birmingham.

The Kookaburras will be aiming to win gold for the seventh straight time since hockey was first introduced to the Commonwealth Games at Kuala Lumpur 1998, while the Hockeyroos are attempting to win their fifth Commonwealth Games gold medal. VIS scholarship holders: Josh Simmonds, Nathan Ephraums, Johan Durst and Amy Lawton.

The Birmingham 2022 Commonwealth Games are live and free exclusively on Seven and 7plus, in what will be the country’s second-biggest broadcast and digital event after Seven’s award-winning coverage of the Olympic Games Tokyo 2020.

Daily coverage on Seven’s primary linear channel will begin from the 7pm AEST prime-time slot, until 5.30am AEST.

To follow all Australian athletes, results and schedules, connect with Commonwealth Games Australia.

The official Birmingham 2022 website is the place to go for a full rundown of what events are taking place and when. Click here to check it out.