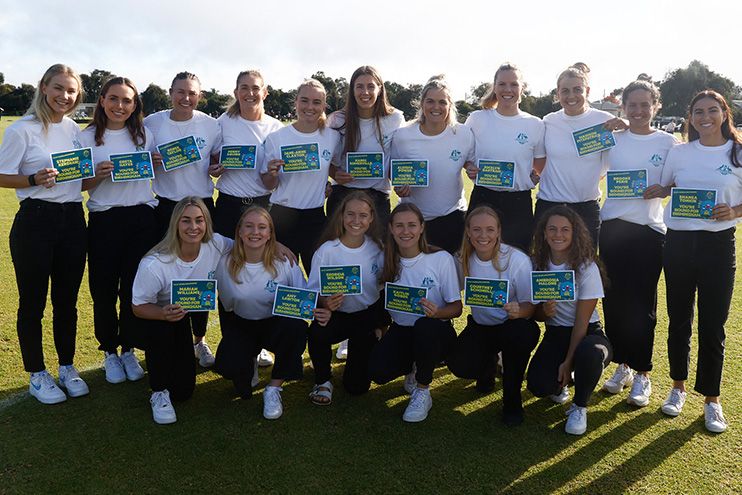 A new-look Hockeyroos squad of 18 players, featuring 12 debutants, are bound for the Birmingham 2022 Commonwealth Games looking to write their own chapter in Australia’s golden legacy at the Games.

A dynamic Hockeyroos team blessed with experienced international stars and rising talent will seek to reclaim a Commonwealth Games gold medal next month in Birmingham.

Denied a hat trick in the final on the Gold Coast four years ago, the Hockeyroos are determined to go one better at Birmingham 2022.

Selectors believe a youthful squad featuring 12 Commonwealth Games debutantes is capable of challenging for the gold medal with the promise they have shown.

Adelaide’s Jane Claxton and Darwin’s Brooke Peris, who are both 29, bring winning experience to the squad and will compete in their third Commonwealth Games.

Claxton is set to pass the milestone of 200 caps for Australia at Birmingham, where she’ll be seeking her second Commonwealth Games Gold Medal after success at Glasgow in 2014.

Peris, who was the Northern Territory’s Sportsperson of the Year in 2014, is a cousin of dual Commonwealth Games gold medallist Nova Peris OAM. She is the only other one in the squad to have played more than 100 games for her nation.

Madison Fitzpatrick, 25, who hails from Cabarita Beach in northern NSW and is now based in Perth, has been a member of the Australian team since 2015. She is confident the world’s third-ranked hockey nation will shine again in Birmingham against tough opposition.

“The Commonwealth Games is very special to me, another opportunity to play for my country and promote the sport I love,” said Fitzpatrick, an aspiring criminal psychologist.

“I most look forward to taking on England and New Zealand because they are always really solid hit-outs and high-quality games.

“Our new players are slotting in very well. The Commonwealth Games will be a big test for them, but they have the full support of the team and the coaches, so I know they will shine.”

Mackay’s Claire Colwill, 18, represents the future of the Hockeyroos. She is making her Commonwealth Games debut after breaking into the team in March.

Colwill, who moved to Perth to prepare at the national hockey training base, is the only teenager in a side that has enjoyed great success at the Commonwealth Games.

“I am thrilled to be selected for the Commonwealth Games and feel excited, albeit slightly daunted, to play with and against some of the greatest hockey players in the world,” she said.

“The Commonwealth Games brings joy, inspiration and community to those competing, officiating and spectating. Having the opportunity to represent my country with pride is an unparalleled experience, so I cannot wait to pull on the green and gold.”

Joining Claxton and Peris in the squad from the silver medal-winning team at the Gold Coast 2018 Games are Sydneysider Kaitlin Nobbs, Brisbane’s Renee Taylor, Townsville’s Stephanie Kershaw and Albury’s Jocelyn Bartram, who is a goalkeeper.

Sydney’s Greta Hayes, Courtney Schonell and Mariah Williams from Parkes in NSW, Victorian Amy Lawton and Rosie Malone from the Gold Coast are also among the debutantes.

Western Australia is well represented, with Perth’s Shanea Tonkin, Karri Somerville and Georgia Wilson, along with Aleisha Power from Northam and Penny Squibb from Tambellup, rounding out the squad.

Australian Team Chef de Mission Petria Thomas OAM is excited for the Hockeyroos squad who will be lead at the Games by former Commonwealth Games gold medallist Katrina Powell, who serves as head coach at the Games for the first time.

“Congratulations to the 18 Hockeyroos who have been selected for the Birmingham 2022 Commonwealth Games,” Thomas said.

“Hockey Australia and the Hockeyroos coaches have selected an exciting group of players to represent the green and gold against the Commonwealth’s best.

“The Hockeyroos have enjoyed a wonderful legacy at the Commonwealth Games, led in the past by champions like current coach Trinny Powell, and I know this group will add their own chapter to that incredible history… I wish them all the best in Birmingham.”

Hockey Australia Chief Executive Officer David Pryles said the Hockeyroos would be supported to the hilt as they set out to win a fifth gold medal from seven Commonwealth Games appearances.

“I extend my congratulations to all the Hockeyroos selected,” he said.

“It’s a huge honour to represent Australia at any time, let alone a major event such as the Commonwealth Games. All of Australia will be watching and supporting them from back home and we wish the team every success.”

This intense, fast-paced sport of hockey has been part of the Commonwealth Games since 1998 and will see some of the world’s greatest teams battle for supremacy at the University of Birmingham.

Hockey will be played on all 11 days of the Birmingham 2022 Commonwealth Games.

The Birmingham 2022 Commonwealth Games will be held from Thursday 28 July to Monday 8 August with the Hockey competition to be conducted from Friday 29 August through Monday 8 August at the University of Birmingham Hockey and Squash Centre.