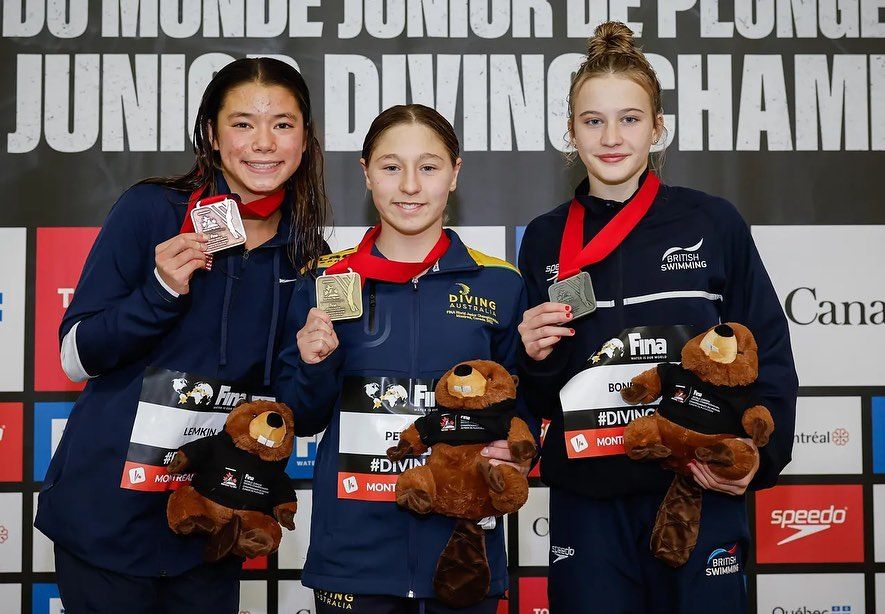 Charli Petrov is now a Junior World Champion, winning gold in the Girls B Platform Final at the FINA World Junior Diving Championships in Montreal.

Just days later, she paired up with Sam Olivier to win another Junior World Championship in the Girls Platform Syncro final.

Dovison paired up with Olivia Roche in the 3m syncronised event to win bronze.

The event is set to continue throughout the week.

After seven days of competition, the Australian Para table tennis team delivered its best ever result at a World Championships, finishing with six medals - all won by VIS scholarship holders.

Qian Yang continued her impressive run of success winning two gold medals; in the women's singles Class 10 and in the Women's Doubles - giving her the number one ranking in the world.

Jeremy Peacock (PTS4) claimed a hard fought and satisfying bronze medal in testing conditions at the world titles in Abu Dhabi, with temperatures reaching 30 degrees as the day went on.

Melbourne-based Peacock charged to his bronze medal in the PTS4 category, celebrating his performance as he crossed the finish line. Teammate Liam Twomey (1:10.42) finished 11th.

Twenty-six-year-old Francis has a progressive and rare form of Dystonia (which is a neurological condition that causes a variety of impairments including hypertonia (high muscle tone), involuntary muscle movements, and gait abnormalities.

And she has taken another step towards her goal of representing Australia at the 2024 Paralympics in Paris.

In other results for the Australians, Tokyo Paralympian David Bryant and Jack Howell were fourth and seventh respectively in the PTS5 category – Bryant in another consistent performance – following his fourths in the World Para Series races in Swansea and Yokohama.

The Kookaburras’ 5-match series against India will go into the weekend’s final two matches with everything to play for as a thrilling last quarter saw the visitors secure a 4-3 win at MATE Stadium in Adelaide.

After an arm wrestle had the sides locked 2-2 late in the contest, the last three minutes produced three goals with Akashdeep Singh scoring the winner for India in the final 60 seconds.

All eyes now turn to Match 4 on Saturday with the Kookaburras leading the best of five series 2-1.

“We thought towards the end when we overpowered them that we did enough to at least draw the game but we were very loose after coming up with the equaliser so there were some good lessons for us.”

Match 4 of the series is at 4pm local time (4.30pm AEDT) on Saturday 3 December before the final match on Sunday.

Two of our VIS Shooting Athletes have competed at the “President’s Cup” in Cairo Egypt this week.

The event was an invitation only competition for the top 12 ranked athletes in each shooting event. Catherine Skinner finished 5th and Laetisha Scanlan finished 9th.