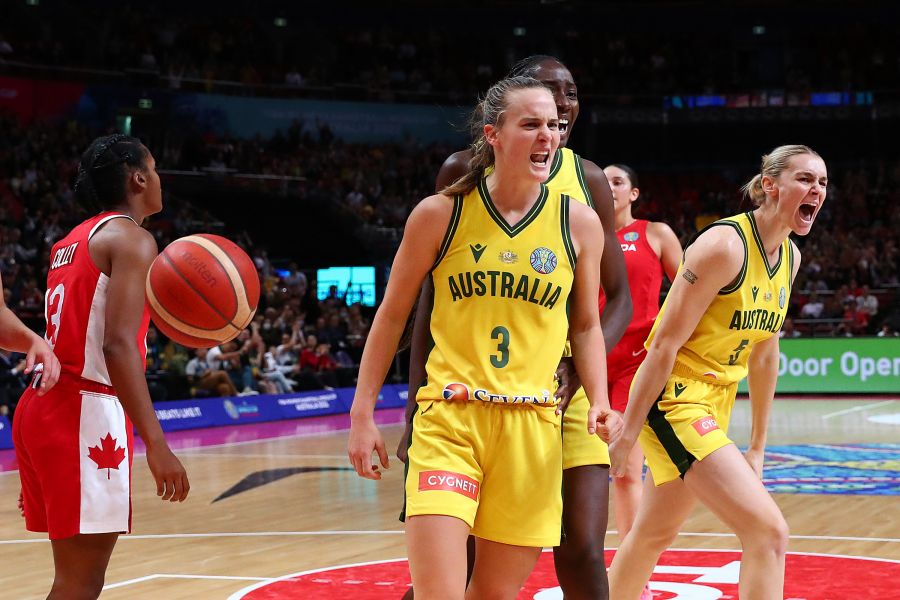 Australia secured bronze at the FIBA Women’s Basketball World Cup 2022, with a 95-65 win over Canada at the Sydney Superdome today, in their first home World Cup since 1994. Victorian Institute of Sport scholarship holder, Kristy Wallace, played her role in helping the Opals over the line, scoring 8 points.

Lauren Jackson wound back the clock with a monumental 30 points in the Opals’ win. The basketball legend was backed by Steph Talbot who had a staggering 16 points, eight rebounds and eight assists to finish as Australia’s most consistent performer of the tournament. Canada’s Kia Nurse started the game strongly, with 19 points by the half, but was kept scoreless in the second.

In the first half, the teams were exchanging buckets for buckets – keeping the stadium of supporters on their toes. In the second half, the Seven Consulting Opals continued to find Jackson on the inside, which successfully opened the game up for the Australians as they drew out the lead.

Canada put forward a valiant effort, but struggled to contain the Australians on their way to bronze medal finish in front of a home crowd.

Australian Head Coach Sandy Brondello was proud of her side.

“We started this journey back in February and just got back to our true identity, and the girls bought in and just worked really, really hard and stayed together. Their resilience, their toughness, their togetherness it just made me really proud as a coach.”

James Willett and Laetisha Scanlan teamed up for the Trap Mixed Teams event at the ISSF World Championships in Osijek, Croatia on Thursday where they won the bronze medal for Australia.

The pair scored 142/150 in qualification tied with Slovenia and entering a shoot off, where the shot a further 4 targets to qualify in 5th position for the Bronze Medal Match.

The Bronze Medal Match was a close affair with the Aussies leading 3-1 at one point over Bulgaria, before finding themselves 5-3 down. They held their nerve and trusted their process bringing the score back to 5-5 meaning it was time for a sudden death shoot off.

Bulgaria started the shoot off hitting their first target but missed on the second. Willett stepped up first for Australia hitting his target, before Scanlan took aim, not letting the pressure of the moment affect her as she dispatched of the second target claiming the bronze medal for Australia.

The trio scored 202/225 in qualification placing 4th, qualifying for the bronze medal match where they would face the People’s Republic of China.

In the final, Australia’s Trap Team women reached 6 points to the People’s Republic of China’s 4 to claim the bronze medal for Australia.

Earlier in the week, Penny Smith had withdrawn from the individual Trap Women qualification due to a medical issue and did her best to recover in time for the Team event, with Smith adding “It’s been a bit of a rough week for me but I was pretty determined to get out here with Teash and Catherine today and give it our best shot and that we did so I’m really proud of them.”