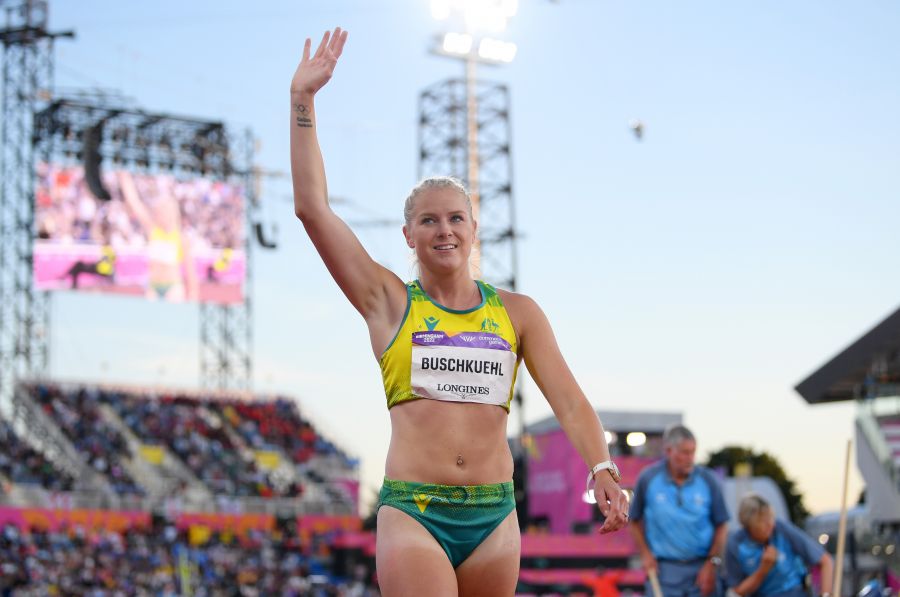 Home News The lowest lows, the highest highs, and the tears In between

After going in for knee surgery at the end of 2021, never in her wildest dreams did Buschkuehl believe she would be back jumping at her best this season, let alone on the podium at another Commonwealth Games and coming home with a new Australian/Oceania record.

“Commonwealth Games silver, it honestly feels like I have won gold,” Buschkuehl said.

“There have been so many times where I wonder why I put myself through the stress of it all, but when you do have success and things go your way, it makes it all so worthwhile.”

During the times where she doubted herself, she insists that her support team at the Victorian Institute of Sport went “above and beyond” for her during the recovery period, and always knew what she was capable of.

“I certainly wouldn’t be where I am today without the ongoing guidance, expertise and support from everyone at the VIS.”

For all of 2021, Buschkuehl was jumping through "persistent” knee pain.

“It got to the point where I couldn’t accelerate, decelerate or jog without pain,” she said.

Determined to jump at the Tokyo Olympic Games, she tried her best to manage the pain.

On and off anti-inflammatories throughout the year and regular cortisone injections were the only answers for her pain but she still impressively pulled together a 6.83m jump at Tokyo to finish seventh.

When she returned home to Melbourne in September, she decided she could no longer battle through the pain and surgery was her last resort.

“I had an MRI scan and that showed I had a full thickness trochlear cartilage tear, which is a tear right down to the bone,” she said.

“I had a chondroplasty and had that cleaned up, and then I also had ITB release surgery as well because my ITB was really inflamed.”

With a big 2022 athletics season on the horizon, which included the World Championships and Commonwealth Games back-to-back in July and August, the recovery gave Buschkuehl a chance to “start everything from scratch.”

The long nonlinear road back to the pit

After a successful surgery, she was told that she could be back running 10 weeks post-surgery.

However, with any injury, the rehabilitation process is rarely linear, and Buschkuehl was feeling the full effects of this.

“I was so far from where I hoped I would be 6 months out from the World Championships,” she said.

“The recovery wasn’t going as smoothly as I would’ve liked, causing a lot of stress and frustrations knowing I had two major championships ahead.”

An international long jump career that has already spanned over 10 years, Buschkuehl has had to deal with numerous injuries. But she insists that this one has by far, been the most challenging.

“The main reason was because my quad was wasting away quite substantially towards the end of 2021, and the start of 2022, and I couldn’t activate it properly because of the pain I was in.”

Being forced to miss the Australian athletics season and the World Indoor Championships was tough for Buschkuehl, as these were event’s she had told herself she would be ready for.

Buschkuehl got into the pattern of looking forward and telling herself where she needed to be and what events she should be jumping in, instead of reflecting on the milestones she had already reached.

To try and get out of these “negative mind frames,” Buschkuehl said that she would reach out to Laura Cosgrove, the Performance Psychologist at the VIS regularly.

“Laura constantly reminded me how far I had come, and how much progress I was making each week which kept my spirits high,” Buschkuehl said.

6 months post-surgery, Buschkuehl was back in the long jump pit jumping and determined to get back to her best in time for the upcoming major championships.

“I was super excited to get back into jumping but I also had a lot of anxiety around whether my knee was strong and stable enough to tolerate the training.”

After getting through a block of jumping in Australia, Buschkuehl headed to Europe for a few weeks to build on her competition form leading into her major events. The experience ended up being a “big blow” to her confidence, getting sick whilst away and jumping nowhere near what she knew she was capable of.

“My body just simply couldn’t do what I wanted it to do."

“Coming home from Europe, I was just questioning everything, picking at every little thing, over-analysing every single jump in training, and it was just to a point where it was just way too much.”

The week Buschkuehl left for America, things were all starting to come together again.

“I felt healthy, I was jumping well, I was feeling fast, and I had set some personal best testing results in the VIS gym.”

Buschkuehl’s long-time VIS strength and conditioning coach, Cory Innes, has been an integral part of her journey to date and has always believed she had “all the right ingredients” to jump big again.

“We had done some gym and jumps testing just before she flew over to America, and in this testing block, she so far exceeded anything she had ever done before.” Innes said.

The competition Buschkuehl had her sights on in preparation for the World Championships, was an event in Chula Vista, Southern California. Chula Vista is well known for good conditions and good jumps performances, so she knew if she got to the runway in one piece “anything was possible.”

“I remember telling my husband after my training session that I was going to jump far tomorrow,” she said.

“I hadn’t felt this confident in myself for years and even he was shocked hearing those words come out of my mouth.”

Buschkuehl opened her competition with a 6.86m jump, the furthest she had jumped since 2018, two attempts later, exceeded this jump by a further 2 centimeters.

“These jumps had well exceeded my expectations for this competition, already,” she said.

But she wasn’t done there and in her final attempt she went further than she had ever been before.

A new Australian and Oceania record, a World Lead jump, and a personal best jump, 6 years and 4 months later.

“The jump felt effortless. I ran in fast, yet controlled, nailed the board and flew through the air.”

“I didn’t expect a 7.13m distance, but at the same I was not surprised after all of the months hard work I had put into get myself back to the pit.”

Innes couldn’t be happier for her when he heard the result, and insisted that it was a credit to all the work she had put in.

“I distinctly remember her saying to me, in the middle of a very difficult phase of her rehab, where she still couldn’t take weight on her injured leg, that she still felt her big jumps were still ahead of her,” he said.

“That stuck with me because it takes a lot of trust and belief after months and months of setbacks, that her best is still there.”

Back among the World’s best

A fortnight later, Buschkuehl continued her impressive form into the Oregon World Championships.

She soared to 6.87m in the second round of the Women’s Long Jump final, missing out on a podium finish by two centimeters.

“I'm so happy to be back competing and I’m proud based on where I’ve come from, but at the same time, those two centimeters are going to haunt me forever.”

Weeks later, she got another chance to show the world what she was capable of at the 2022 Birmingham Commonwealth Games.

Buschkuehl confirmed that she was well and truly back to her best, on her fifth attempt in the Women’s Long Jump final, she recorded a jump of 6.95cm – her third longest jump ever, and far enough to win her a second consecutive Commonwealth Games silver medal.

Although the same colour as the medal she won at Gold Coast 2018, this one was made even more special based on the journey she’s been on over the last four years.

“I have overcome numerous injuries, a knee surgery, dealt with two autoimmune diseases daily and the challenges when COVID struck.”

“These hard times have made the successes this season all the more special.”

When reflecting on the last 12 months, she doesn’t shy away from the fact that it’s been filled with some of the lowest lows.

“I feel like there’s been more days where I’ve been in tears this year, than I’ve been happy and smiling.”

“But I think having been through the really tough and challenging times definitely made me stronger and made me more determined as an athlete.”

“Just that pure relief and happiness. It’s definitely all worthwhile.”