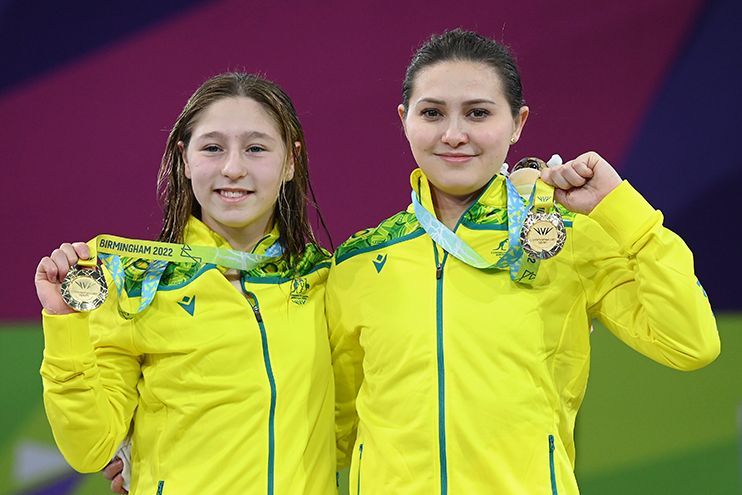 The master and the apprentice have won a stunning gold medal in the women’s 10m Synchronised Platform event.

With a gold medal around her neck, Australia’s youngest athlete at the Commonwealth Games giggled like the 14-year-old she is.

Diver Charli Petrov reckons her gold medal with stalwart Melissa Wu in the women’s synchronised 10m platform is “the most amazing thing ever”.

“The past 24 hours have been full of either tears or anxiety,” Petrov said.

“So going out there and now, about to go home with a gold medal, is just crazy.”

Petrov wasn’t born when a 13-year-old Wu won her first Commonwealth Games medal, a silver at the 2006 Melbourne Games.

But the pair prevailed in a nerve-jangling final in Birmingham on Saturday night to edge England’s Eden Cheng and Andrea Siriex by just 7.14 points.

Australia’s youngest-ever Commonwealth gold medallist is swimmer Jenny Turrall, who was 13 years and eight months old when she won the 400m freestyle at the 1974 Games.

“To do synchro with Charli and see the next generation coming up, that is the best feeling ever,” Wu said.

Earlier, Keeney and Smith had been waiting for four years for their 40-minute long synchro final.

And those minutes turned into some of the sweetest in the careers of the new Commonwealth champions whi admit their gold is a redemption tale.

Four years ago at the Gold Coast Commonwealth Games, the pair entered as favourites and, with one dive remaining, were in the gold medal position.

But they spectacularly bombed on their last dive. It didn’t even score a point, they slipped from first to last, and exited the Gold Coast distraught.

“It was really hard to process obviously,” Keeney said on Saturday after collecting a coveted gold.

“It was my fault on the Gold Coast.”

Smith then chipped in: “I also made a mistake, so it wasn’t just Madi’s fault.”

Their performance in Birmingham was near faultless, leading from start to finish to win with 316.53 points.

“It just feels like a culmination of what I have learnt as a diver and how to overcome nerves and how I approach my competition,” she said.

“So being able to do that is really just shows me what I am capable of.”