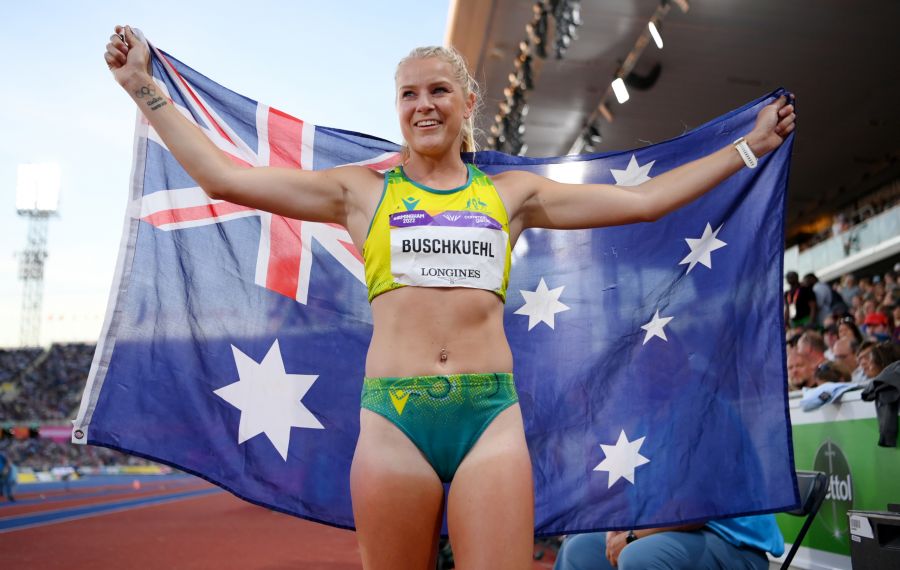 Home News Silver made Buschkuel's struggles worth it

Snubbed by footwear and apparel sponsors and at times on the verge of quitting long jump altogether, Brooke Buschkuel says her second-straight Commonwealth Games silver made the tears worth it.

Buschkuel’s fifth jump of 6.95m saw her fall short of Nigeria’s Ese Brume, who broke the Games record with her second jump of 6.99, then broke her own record with 7.00m on her final jump.

But after a brutal lead-in, including knee surgery in September that kept her away from jumping until April, Buschkuel was “absolutely over the moon” with silver.

“I literally would not have expected to be in this position about two months ago,” Buschkuel told reporters.

“I was lacking support from – and I still am – a footwear and apparel sponsor, so that’s been something that’s really made me question my worth and question whether I’m deserving enough of it.

“I think I just had to push all those thoughts to the side and just keep grinding through the really tough times.

“I feel like there’s been more days where I’ve been in tears this year, than I’ve been happy and smiling.

“So it just means so much to have this silver medal around my neck and it makes the hard times really worthwhile.”

Despite her form, the 29-year-old was skeptical the sponsors would come knocking.

“I’m not holding my breath, I’ll cross my fingers,” she said.

“But yeah, hopefully, jumping 7.13m this season, 6.95m for silver in Comm Games and fifth at world championships is enough.”

Buschkuel said the 6.95m mark was her third-longest jump ever and ended her season on a high note after a “frustrating eight or nine months” out of the pit.

“Just being able to start everything from scratch, a clean slate has just really allowed me to just work on the real basic aspects of long jump and I feel like I’ve come back better than ever, which is kind of crazy,” she said.

“But I think having been through the really tough and challenging times definitely made me stronger and made me more determined as an athlete.”

After contemplating pulling the pin, Buschkuel is now eyeing the 2024 Paris Olympics – and beyond.

“I’d love to obviously keep going through to Victoria 2026 Comm games,” she said.

“I know I’ll probably be getting a little bit old by then but hopefully I can.”