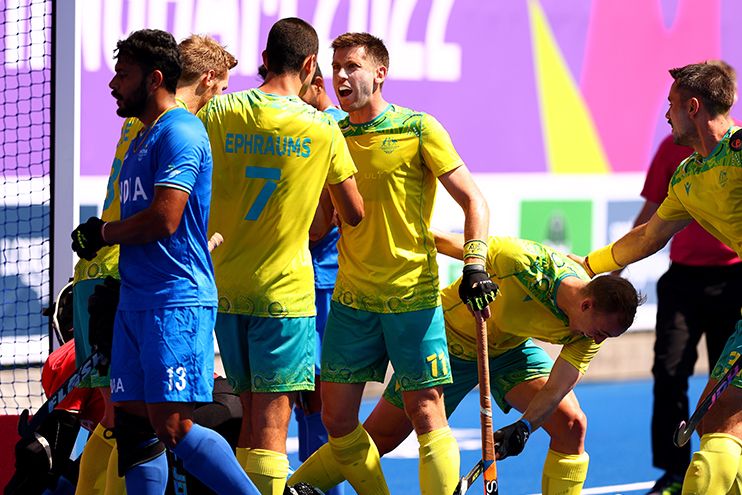 In four campaigns he hasn’t lost a game and Paris’s 2024 Olympics are firmly on the radar as the 35-year-old eyes the one thing missing from his resume.

“I’m really proud to have that, and it’s a huge part of our history, but it’s not about my fourth, it’s about the team now winning the gold medal,” Ockenden said.

“I have no idea (about the next Commonwealth Games), it seems like such a long way away … it’s in Victoria, Geelong, I’m a big Cats (AFL) man, so it’d be nice.”

A potentially testing examination between the Tokyo Olympic silver and bronze medallists quickly became a celebration of Australia’s hockey entertainers on the Games’ final day.

They exploded out of their semi-final slumber – a 3-2 defeat of England on Saturday being a rare vulnerable moment – to score five first-half goals and all-but order team staff to place the beers on ice.

It was an emphatic reminder of their Commonwealth dominance. They are 41-1 since the sport entered in 1998, with an overall scoreline in those seven finals of 33-2.

The brilliance of one of the country’s most underrated teams was best summed up by their second goal.

Daniel Beale showed dexterity to pluck possession from an Indian stick on the edge of Australia’s defensive circle.

Beale ripped the ball to Flynn Ogilvie with Nathan Ephraums finishing the brilliant passage with a simple tap in.

“We had to scrap and fight (in the semi-final) and when you win those you gain momentum,” Ockenden said of their blistering display.

“It points to the culture and we were lucky to get the chance to play like we did today.”

It was hockey at its best and India, despite the incredible hand-eye coordination of goalkeeper PR Sreejesh, were simply no match.

“He’s still looking like a spring chicken, running around at his fourth Comm Games,” co-captain Aran Zalewski said of Ockenden.

“We can draw on so many experiences he’s had … highs, lows, things that are indifferent.

“Just having someone that’s so calm under pressure, is a humble guy and a good fella … we love everyone in our team, and Eddie just as much.

“We’ll head down to the pub and have a few beers and carry on a little bit.”