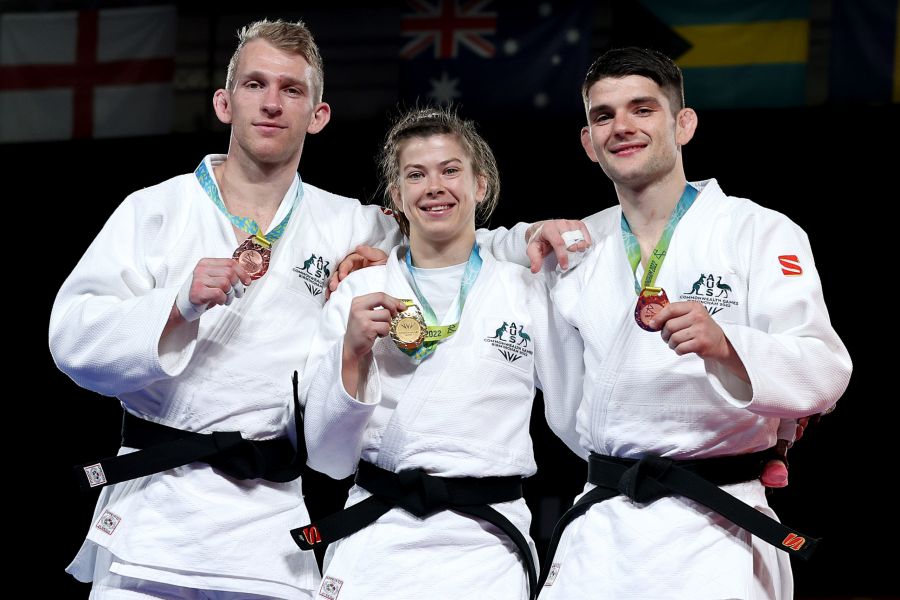 Easton snatched victory from the jaws of defeat against Canada’s Kelly Deguchi in the women’s 52kg in Coventry, winning via Waza-ari in the golden score period.

The 26-year-old had two Shidos (penalties) to Deguchi’s one and appeared on the ropes before pulling off an Uchi-mata to seal the victory.

Easton threw Deguchi over her thigh and onto her back then pounded her fist on the ground and threw her arms in the air in euphoric disbelief.

“It’s something I’ve been dreaming about for the last few years so it’s very exciting to make it happen,” she said.

“I was falling behind the pace a bit and picked up a few penalties. But it came to a point where I had to switch it on and go, and it turned out OK.”

Katz, 24, was a pre-tournament favourite but a semi-final loss to England’s Ashley McKenzie, the eventual gold medallist, relegated him to a bronze-medal fight.

He quickly seized control against Zulu and won in three minutes and 48 seconds by Ippon, sealing the deal with an excellent seoinage.

“I was here for gold but I’m still excited to come away with a medal for Australia,” he said.

Nathan Katz claimed a hard-fought victory by Ippon with Tai-otoshi over Jasleen Singh Saini in the men’s 66kg.

Six seconds before the golden score, Katz got the inside grip on Saini then flung him squarely onto his back before punching the air in delight.

Katz, 27, made the bronze-medal match via repechage victory over Wales’ Gregg Varey, after losing his quarter-final against Cyprus’ Georgios Balarjishvili.

“I hadn’t fought in about six months, I’ve been injured just constantly,” he said.

“I hadn’t won a match before today since Tokyo 12 months ago so there was a lot of pressure to perform and show that I’m still at this level.

“I don’t really think I did that (perform) today but I did show that I’m at this level and I can win medals internationally, so I’m really happy.”

The Katz siblings are the sons of Kerrye Katz, who competed for Australia when women’s judo was a demonstration sport at the 1988 Seoul Olympics.

Father Rob Katz is their coach.