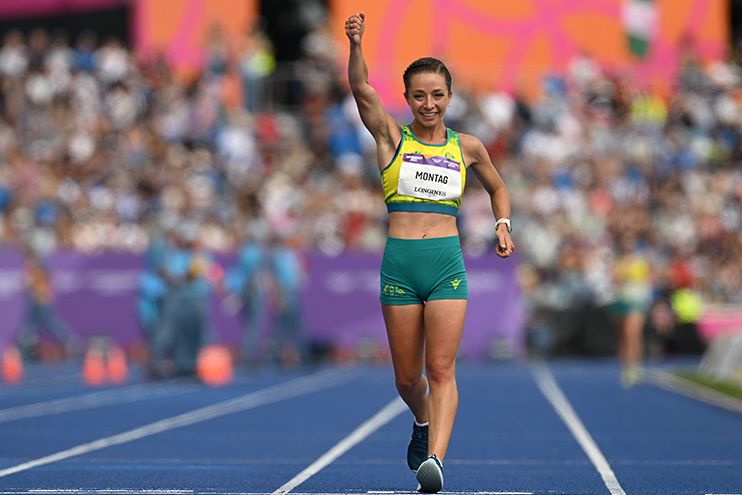 After a dominant victory in the women’s 10000m racewalk, the now two-time Commonwealth Games gold medallist thought of her grandmother and the impact on her life.

When Jemima Montag’s bracelet clinked against her wrist as she claimed 10,000m race walk gold, she could feel her late grandmother, a Holocaust survivor, there with her.

The bracelet was grandmother Judith’s necklace that she had cut into three for Montag and her two sisters two years before she died.

Montag never met her grandfather, while Judith rarely spoke about her experience.

Judith died just before last year’s Tokyo Olympics, and when Montag was later sitting in hotel quarantine, she looked through love letters and old documents, translated by a Polish race walking friend.

With it, Montag learned the lengths her then-12-year-old grandmother took to survive.

“In some of her love letters and journal entries she wrote about just trying to make it through the next hour, the next day, just hoping to meet her dad at the gate with a piece of bread,” Montag said.

“You just had to have such a careful balance of taking risks and being a little cheeky when it was possible.

“Stealing scraps of food, running from one line to the other if it meant not being put to the gas chamber, and then sticking by the rules, when it was the right thing to do so.”

Montag was particularly touched by the story of one of the infamous Auschwitz death marches.

“They marched through snow and cold for days on end in little sandals, and hardly any clothing,” she said.

“She and her sister took their waistbands and tied their wrists together and they said ‘we’re getting through this together or not at all.’

“So just visualising her walking on ice, not knowing when her next meal would be or if she’d survive.

“This (race walking) is fun and this is something I choose to do and yes, it’s hard, but someone just two generations ago had that level of strength and I know it’s with me now.”

“The love story, which is really beautiful, is that the war finished, everyone fled to different spots – he fled to Melbourne and she fled to Paris,” Montag said.

“She actually married someone else, had one child but (her former husband) unfortunately died of diabetic liver complications.

“So she’s a widow, she’s lost her sister, she’s lost everyone except her father, living in Paris with a six-month-old baby.

“She received this letter from Melbourne saying: ‘hi Judith, my name is Richard. You’ve got no reason to trust me, but I heard from a friend that we went through similar camps and that you’re now a widow.

‘Melbourne is pretty great land of opportunity and if you get on that boat, I promise to look after you.’

“She raised my dad’s sister on the boat. She thought she’d had enough bad luck, what is there to lose?”

“They married, she had my dad and his brother. What a beautiful love story.”

Montag lapped multiple competitors as she finished in 42 minutes, 34.03 seconds to add the shorter distance gold to the 20km title she claimed on the Gold Coast four years ago.

As she celebrated with the crowd on the final lap, her bracelet clinked all the way.