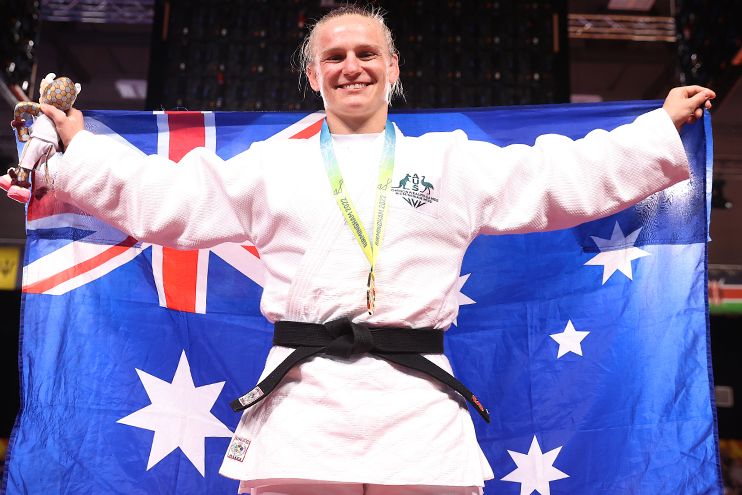 The medal haul for the Australia Judokas continues on Day 5 with Aoife Coughlan winning gold in the women’s 70kg division.

Aoife Coughlan has put on a rare show for her family to claim judo gold as Australia stormed to seven Commonwealth Games medals in just two days on the mat at Coventry Arena.

The 26-year-old had Ebony Drysdale Daley scrambling from the outset, the Jamaican player’s generally non-combative tactics backfiring when a third shido penalty handed Coughlan the win in the golden score extra period.

“I knew I had to pick up the pace and push here, make sure I was ahead of the game and make sure she made some mistakes,” Coughlan said of Jamaica’s first judo Games medallist.

“She is a very tough fighter but I got there.”

Coughlan could finally break focus and celebrate with her family in the stands, some of which had never seen her fight live before.

“The atmosphere in here has just been insane,” she said.

“It’s amazing to have them here.”

Jake Bensted was even more efficient, taking just 73 seconds to beat Northern Island’s Joshua Green and collect a second bronze to go with his third in Glasgow.

The Australian wasted no time in the medal fight, successful with the shime-waza to strangle Green and force a submission.

Nikolic looked a beaten man early in his 81kg fight with Eoin Fleming but avoided ippon and then overcame the limping Northern Irishman, who bravely fought deep into golden score despite a right leg injury almost reducing him to tears.

German-born Haecker was disappointed with a mistake in her semi-final loss that robbed her of a gold medal shot.

“I’m definitely not happy with the bronze, I was coming here to win gold but that plan didn’t work out,” she said.

“She (semi-final victor Gemma Howell) strangled me, I was looking out for a different technique but she surprised me, very well done.”

Haecker, whose father is Australian, has established a dojo in Melbourne for the country’s best players

“We have a really good group now and more results are coming very soon for us,” she said.

“I love Australia, I feel very Australian. I’m proud to be German and Australian but I love to represent Australia.

“They gave me a chance to represent Australia and I will forever be grateful for that.”