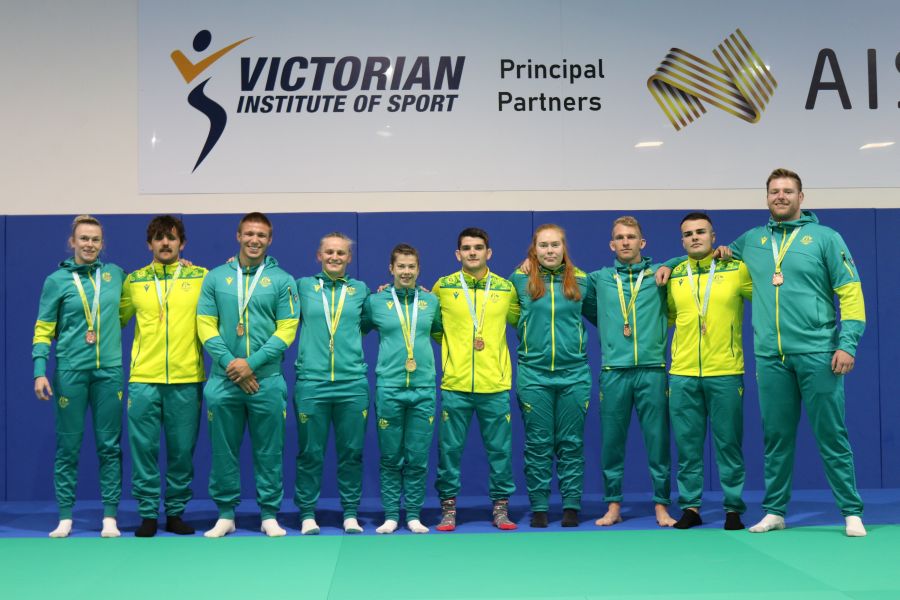 To celebrate Australia’s most successful judo result at a Commonwealth Games, The Victorian Institute of Sport (VIS), the Combat Institute of Australia (CombatAUS) and Judo Australia hosted a Welcome Home celebration for the Victorian based Australian Judo athletes.

The event was held at the National Performance Centre in Albert Park.

Team Judo Australia capped off a historic effort at the 2022 Commonwealth Games in Birmingham, bringing home 10 medals, the most for any Australian judo team at a Commonwealth Games. Two gold, and eight bronze medals were enough to see the team finish the competition in 3rd place behind host nation England and runners-up Canada.

“Thank you to CombatAUS, Judo Australia and the VIS for your continued support and for your belief in the program and what it can do for current and future athletes.”

“Commonwealth Games is a great base for us to build more international success on and provides visibility to the next generation of Australia judoka of what’s possible for them to accomplish”.

“I’m so excited to see what the future holds for this team and for those coming up through the ranks.”

VIS CEO, Anne Marie Harrison, was grateful for the opportunity to welcome home the athletes as well as congratulating them on their impressive performances at Birmingham.

“How good was it to see Judo return to the Commonwealth Games program since its last appearance in 2014 and Australian athletes secure our first gold medals since 2002. Coventry Arena dojo was host to a large and noisy crowd, which created a great atmosphere in which to compete.”

“Congratulations to the athletes who performed with great distinction and provided so many highlights as the stars of the show. It is great to see your talent and commitment being rewarded. Our thanks also to the team behind the athletes; from their families and first club, to their coaches, our partners in CombatAUS and the great staff at the VIS who have been on the journey with them.”

CombatAUS CEO Alex Vallentine was also appreciative of the chance to welcome family, friends, and members of the judo community into the National Performance Centre, which was officially opened earlier in the year.

“I could not be prouder of the performance of our judo athletes in Birmingham. To bring home 10 medals is an incredible achievement and one that really highlights the incredible amount of hard work, dedication and focus which the athletes and coaches have put in over many years.”

“This is still just the beginning for this group of athletes, with plenty more success ahead for them on the road to the Paris 2024 Olympics and beyond.”

Emma Taylor, CEO Judo Australia is proud of the team’s performances and excited for what the future holds.

“The performance of our judo team at the Birmingham 2022 Commonwealth Games was outstanding. We are so proud of the teams’ inspirational results.”

“The partnership with the Victorian Institute of Sport through our National Performance Centre and Combat Institute of Australia is delivering a level of support which is enabling our team to be the best they can be. The future for our judo program looks strong and we are excited to continue watching our athletes excel on an international stage.”

The annual eight-day event is the highlight of the international judo schedule and will see the best judoka from across the globe compete for the title of world champion.

This year’s event will also mark the first World Championships of the new Olympic qualification period meaning that athletes will earn valuable points toward qualifying for the 2024 Paris Olympic Games.