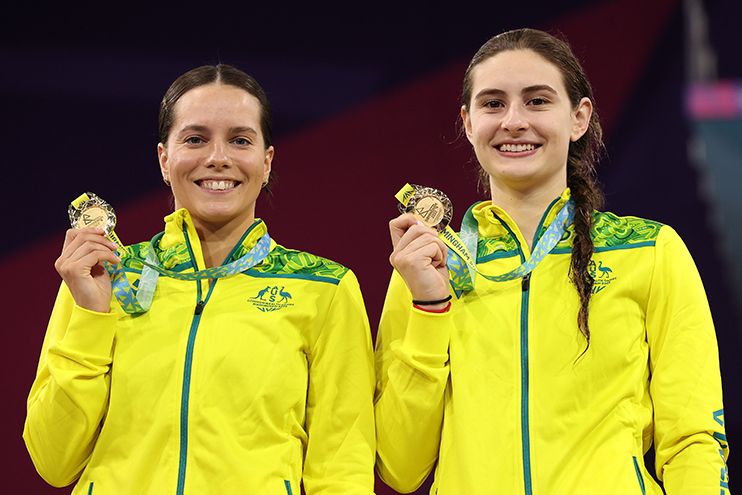 For four years, Australian divers Maddison Keeney and Anabelle Smith had been waiting for these 40 minutes.

And those minutes have turned into some of the sweetest in the careers of the new Commonwealth Games women’s synchronised three springboard champions.

Keeney and Smith admit their gold medal in Saturday’s final in Birmingham is a redemption tale.

Four years ago at the Gold Coast Commonwealth Games, the pair entered as favourites and, with one dive remaining, were in the gold medal position.

But they spectacularly bombed on their last dive.

It didn’t even score a point, they slipped from first to last, and exited the Gold Coast distraught.

“It was really hard to process obviously,” Keeney said on Saturday after collecting a coveted gold.

“It was my fault on the Gold Coast.”

Smith then chipped in: “I also made a mistake, so it wasn’t just Madi’s fault.”

Their performance in Birmingham was near faultess, leading fr om start to finish to win with 316.53 points.

“It just feels like a culmination of what I have learnt as a diver and how to overcome nerves and how I approach my competition,” she said.

“So being able to do that is really just shows me what I am capable of.

“We have been diving together for eight years and there has been so many tough times over the years.

Smith, who partnered Keeney to a bronze medal in the event at the 2014 Glasgow Commonwealth Games, described the gold as reward for effort.

“Madi and I have been together for a long time but we had never won this Commonwealth Games gold medal,” she said.

“To actually be there today is really special.”