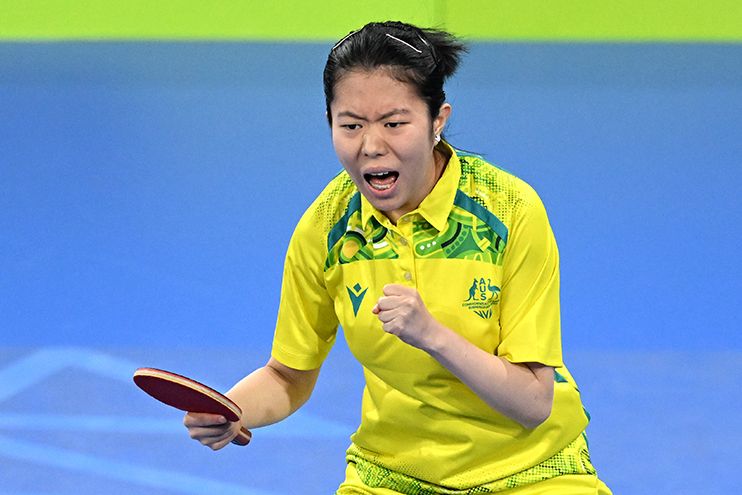 When she arrived in Australia as a table tennis prodigy in 2019, Yangzi Liu had no idea of the magnitude of what she was about to accomplish.

The 20-year-old, who lives in Melbourne after moving from China, beat India’s Sreeja Akula 4-3 in a pulsating bronze medal match.

Australia has never previously won a medal in women’s singles at the Olympics, World Championships or Commonwealth Games.

“Not before I came to Australia,” Liu said when asked if she was aware of the medal drought.

“After I got my Australian citizenship and started preparing for the Commonwealths, everyone seemed really serious.

“They said it was like the same level as the Olympics, even more important because we can get good results in the Commonwealth Games.”

With scores locked at two games apiece, Liu won an epic fifth game when she converted on her fifth game point for a 15-13 win.

Liu looked headed for the medal when up 8-3 in the sixth game, only for Akula to reel off eight of the next nine points to take the game 11-9.

It was a similar story in the deciding seventh game when Liu jumped out to a 6-1 lead only for Akula to win the next four points, but the Aussie held on this time to prevail 11-7.

Earlier, Lin Ma said he hoped his Birmingham silver medal was just the start of a long and prolific Commonwealth Games career.

A four-time Paralympic gold medallist who moved to Australia from China in 2017, Ma lost his right arm when he was five when he was attacked by a bear at a zoo.

Given the extreme amount of blood loss, he was considered lucky to survive.

And having now walked away from his first Games with a silver medal, he already has his sights set on the Paris Paralympics and the home Commonwealth Games in 2026.

“It hurts a little bit (getting silver) because it’s sport – there’s always a winner and a loser,” Ma said through an interpreter.

“We’ve played against each other lots of times, sometimes he wins sometimes I win.

“I’ll try my best to keep going – the first goal is Paris.”

Ma lost the first game 25-23 but recovered to take the next two games comfortably.

Stacey won the fourth game to set up a decider, where Ma never recovered from an early 5-0 hole.