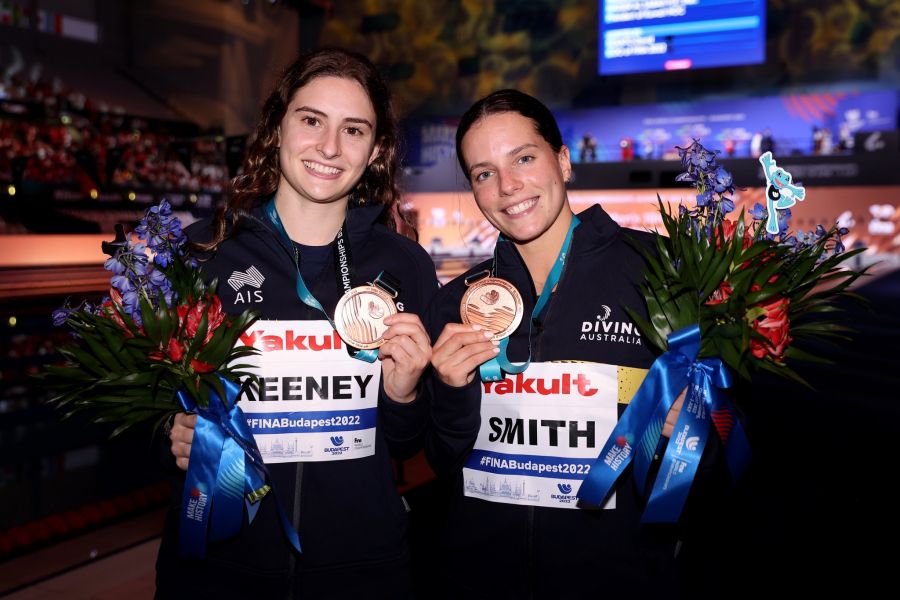 Home News WEEKEND WRITE-UP: Smith back on the podium

In VIS sport, Anabelle Smith landed on the podium in Budapest, as the Hockeyroos kick-started their World Cup campaign with a win. But, it was sad news for the Melbourne Vixens who fell short of another SSN premiership, defeated by the West Coast Fever.

Anabelle Smith and Maddison Keeney have once again landed themselves a podium finish with a bronze medal in the Women's 3-Metre Synchro event on the final day of the 2022 FINA World Championships in Budapest.

The Melbourne Vixens have fallen short against the West Coast Fever in the Suncorp Super Netball grand final, 70-59 at Perth Arena.

Leading from start to finish, the Fever won each of the four quarters and were too good for the Vixens in front of a crowd of 13,908 people - a new attendance record for a Super Netball match.

The Hockeyroos have started the side’s women’s world cup campaign with victory over Japan.

VIS scholarship holder Amy Lawton helped the Hockeyroos get off to a flying start in the second half, doing her best to manufacture the opening goal of the game as she drove into the circle and sent the ball across goal face. Although Japan managed to block this attempt, two goals in the final five minutes gave a spirited Hockeyroos a 2-0 victory over Japan in their opening match of the FIH Women’s World Cup 2022.

The Hockeyroos’ next match is against Belgium at 5.30am AEST on Wednesday 6 July.

Pearse struck early in the first of his three events, claiming silver in the men's 200m S10 individual medley. Before he followed that up with another silver medal in the 100m butterfly event, both behind his main rival in the S10 class - Italy’s Stefano Raimondi.

The result is Pearse's best finish at International level and adds another couple of medals to his ever-growing cabinet.

The sun broke through with calmer winds than seen all week to reveal a picturesque Henley-on-Thames for the Henley Royal Regatta Finals. Australian athletes claimed The Stewards’ Challenge Cup, The Double Sculls Challenge Cup, The Hambleden Pairs Challenge Cup and The Prince Phillip Challenge Trophy at the 2022 Regatta.

The team will now travel to Lucerne, Switzerland where they will prepare for World Cup 3 (8 – 10 July) – the final round of the World Cups – which will conclude their European racing tour.

Victorian Institute of Sport scholarship holder Emma Booth has placed third on her horse Fursty in the Freestyle event at Grote-Brogel CPEDI3* in Belgium over the weekend. The result is a new Personal Best for Booth and Fursty as a combination, scoring 73.245%.

Linden Hall, Georgia Griffith and Catriona Bisset all impressed at the Stockholm Diamond League meet in Sweden last week, all returning to the podium in their respective events.

Australian record holder Catriona Bisset (Ned Brophy-Williams) punched in her best run of the season as she returned to the Diamond League podium, tearing around the 800m in 1:58.54 to finish in third place as the race was won by Mary Morra (Kenya) in 1:57.68.

The pre-program reaped a series of strong results to set the tone for a successful night in Stockholm, with Linden Hall (Ned Brophy-Williams) delivering a strong run of 4:02.65 to defeat the field, while Georgia Griffith (Nic Bideau) returned after a bout of COVID-19 to finish third in 4:04.75.

Australia has enjoyed some strong performances at the Korean Open, which kicked off in Chuncheon last week.

Bailey Lewis (City West Taekwondo, VIC), will return home with a bronze medal after fighting through to the semi-final on day one. Lewis lost the third round on superiority after scores were tied at the end to finish on the podium with a bronze after an excellent performance.

On day two, another bronze was in the bag when Saffron Tambyrajah (Notorious Martial Arts, VIC) took to the mat, ending her semi-final (2-0) against the WR20 from Korea to step onto the podium and Australia's second bronze.