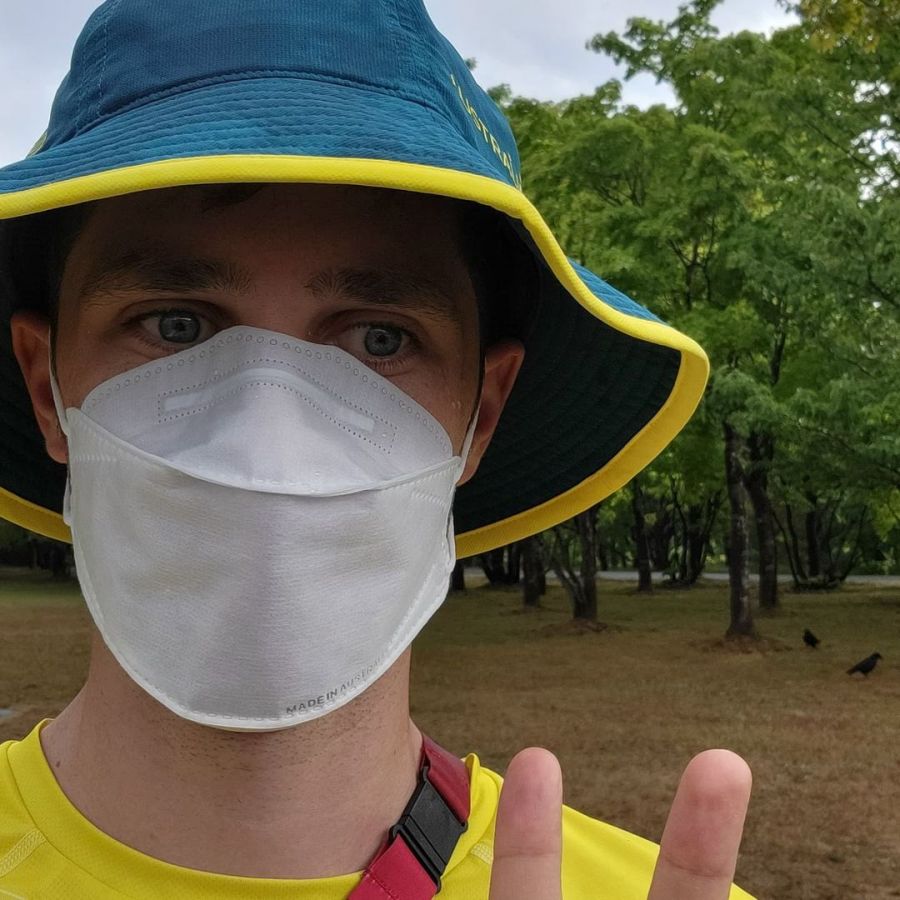 Home News Cowley pursuing his passions in sport and life

​Rhydian Cowley spends most of his time walking on Wurundjeri country in Naarm (Melbourne). In an average week the Olympic race walker will complete more than 100km of training - at a pace few can run.

Rhydian Cowley spends most of his time walking on Wurundjeri country in Naarm (Melbourne). In an average week the Olympic race walker will complete more than 100km of training - at a pace few can run. In March, Cowley swapped his walking shoes with a 4WD in Dja Dja Wurrung Country where he learned about driving off-road, and about looking after Country as part of his new role at Bush Heritage Australia.

Cowley first came on scholarship at the Victorian Institute of Sport (VIS) in 2013 and since then he has not only participated in two Olympic Games (Rio and Tokyo) but is also mastering the balancing act of a dual career.

He has completed a double degree from Deakin University in Arts and Commerce and started his new job at Bush Heritage Australia (BHA) in December. BHA is an independent not-for-profit that buys and manages land and partners with traditional owners to protect our irreplaceable landscapes and magnificent native species forever.

During the pandemic lockdowns in Narrm, Cowley found that connecting with the environment and local animals when he was exercising was important for maintaining his sense of wellbeing. When a role opened up at BHA, he was excited to work for an organisation that cares for the environment and where he could contribute to something he values.

“BHA was an attractive workplace to me because of the way their partnership with Traditional Custodians empowers them to return to caring for Country, and how they combine modern conservation science with rebuilding traditional knowledge,” Cowley says.

“I’m quite concerned about the impacts of climate change, both in general and on my sport, so this was also a way for me to actively respond to that concern and to give myself agency and a sense of doing something about it”.

Participating in meaningful causes is nothing new to the 31-year-old race walker, who in 2021 was an AIS Share a Yarn ambassador, joining the initiative to help foster and promote reconciliation through sport.

“I have looked for ways to practically support Aboriginal and Torres Strait Islander people, and this is another way I feel I can do so,” he says about working at BHA.

Balancing work and sport can be a challenge for a world class athlete, but Cowley has found that his work outside of sport gives him a more rounded self.

“I find it’s a great way to fill my day and have other things to define myself by rather than sticking all my eggs in the elite-athlete basket. This means that my self-identity will be a bit more resilient in the case of injury or poor performance”.

He admits that managing a dual career can risk overextending and not allowing himself enough time to rest during busy periods, and that keeping his stress levels in check is a dynamic challenge. He therefore identifies key training sessions that he prioritises and finds ways to be efficient with his time so that each task, whether in work or sport, gets the focus it requires.

“Like a 50km walk race, you have to find a sustainable and consistent rhythm and routine in order to perform at your best,“ Cowley says.

Bundling days at the VIS is a way he can make time to get his work done while also accessing the performance service support that he needs to keep his body moving well.

The VIS support system has enabled Cowley to pursue his passions outside of sport and over the years he has learned how to use the full scope of the support structures available to athletes.

“Having conversations with my VIS Performance Lifestyle adviser around my career outside of sport and networking has been very important for my development,” Cowley says.

“It is rewarding to be able to work alongside people like Rhydian,” Madigan says. “He has always been willing to lean into the support that the VIS Performance Lifestyle team offers”.

Madigan highlights that Cowley has been willing to explore his own development while also balancing his work schedule and a significant training load, alongside camps and competitions.

“It is terrific that he has found vehicles for his passions in both his working life and community involvement.  His embracing of these opportunities is reflected in his well-rounded approach to both his sport and life away from sport,” Madigan says.

Cowley has been a constant in Australian race walking for the past decade. He has represented Australia at the Olympics and at World Championships and the highlight of his career, so far, came last year where he finished 8th in Tokyo.

“I’ve been very lucky that my sport has given me a way to see some of the world over many years and make friends from other countries,” Cowley says. “Recently, with the pandemic and the war in Ukraine, I’ve realised that I can’t take that for granted, and I should appreciate the opportunities and experiences I’ve had”.

The skills that Cowley has learned from sport has also equipped him for work outside of sport and at Bush Heritage Australia they value the skills that elite athletes can bring to their workforce.

“Elite athletes bring focus, dedication and the ability to deliver under pressure. They’re used to balancing needs, to think ahead and to work in teams,” says Michelle Jacobs, Executive Manager People, Safety and Culture at BHA.

“They’re driven by passion. We have a number of people with a background in professional sport, be it as athletes or managers – including two members of our executive team.”

Knowing that people are key to their success, Bush Heritage Australia are always focussed on hiring the most talented, passionate people they can find.

“We’re proud to have a diverse workforce and when we recruit, we look for not just professional experience, but also experience in life and how that translates to working with us,” Jacobs says.

Back in March on the Nardoo Hills, Cowley learned about what looking after Country means and spent time in conversation with the Victorian reserve manager and Dja Dja Wurrung Traditional Owner Sharnie Hamilton, who generously explained what the area and names mean to the traditional custodians.

“Joining an organisation that cares for the environment is exciting, as I feel more of my time is spent contributing to something that I value,” Cowley says.

Cowley has no plans of slowing down his career outside of sport and his long list of commitments also includes engagements with the Sports Environment Alliance, EcoAthletes, World Athletics and he is a member of the VIS RAP (Reconciliation Action Plan) working group.

You can learn more about Bush Heritage Australia and their work on Dja Dja Wurrung country by following these links: Bush Heritage, Bush Heritage secures more land in central Victoria.