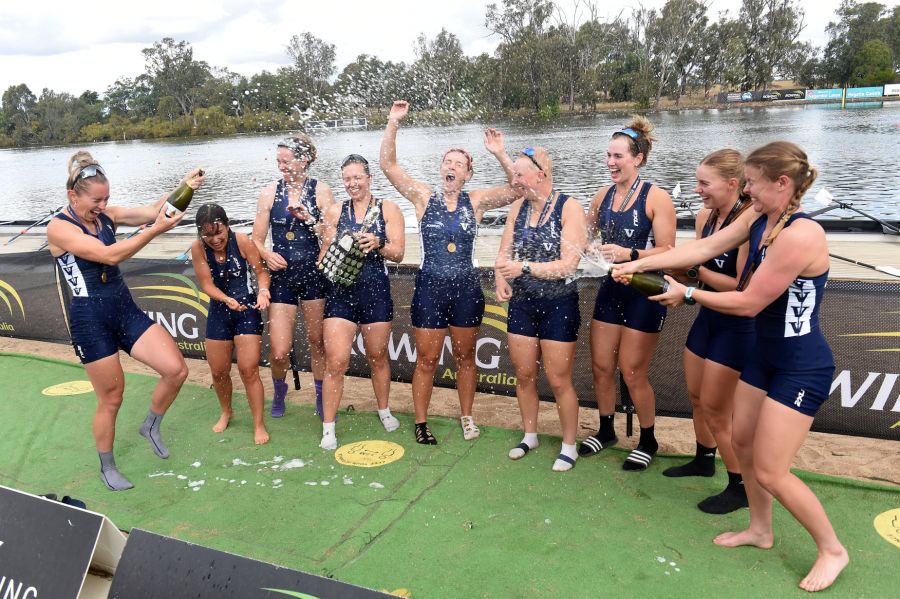 In VIS sport, Victoria takes their fourteenth victory in The Queens Cup, as Montag and Swan secure their tickets to Birmingham.

The best racing conditions in Lake Nagambie were saved for the last day, as Nagambie Lakes looked calm, the air was full of excitement.

The Queens Cup saw another all-the-way win to early leaders Victoria, who took their fourteenth victory out of the last fifteen years.

Katrina Werry, the stroke of the eight and Tokyo Olympian explained, “I just needed to do my role the best I could, so that the girls behind me had something to follow.

“To be able to do this in our home state – in Victoria – it gives us a sense of home pride. The girls are just so ecstatic.”

The Interstate Regatta started with the home state leading early as Victoria’s Jessica Gallagher, the Summer and Winter Paralympic Medallist claimed the first win in the Women’s PR3 Single Scull.

Gallagher, who was named to the Australian Rowing Team in March 2022, burst out of the starting blocks, leaving the battle for the minor placings behind her.

Victorians Jemima Montag and Kyle Swan have all but booked their tickets to Birmingham after securing automatic nomination for the Commonwealth Games team at the 2022 Chemist Warehouse Australian Track and Field Championships this evening.

Montag won the Australian women’s 10,000m race walking title in a swift 43:02.97 – comfortably under the qualifying standard for Birmingham and is now set to defend her gold medal this August. She also became the first Australian track and field athlete to be nominated to Commonwealth Games Australia for the UK campaign.

Though Swan wasn’t able to dip under the qualifying standard of 39:30.00 tonight, a previous qualifying time coupled with the 2022 Australian 10,000m Race Walk title will guarantee his spot on the Australian team.

“I’m really happy with that tonight. I got the auto qualifying time back in January and have cemented that in tonight,” Swan said.

The 1500m T53/54 races marked the last opportunity for Australia’s wheelchair athletes to lift their rankings within the Commonwealth to cement their place on the Australian team for the Birmingham 2022 Games.

While the conditions and the track at Sydney Olympic Park aren’t conducive to fast times for wheelchair racers, a quintet of athletes did battle in the Men’s Open event, as Sam Rizzo (VIC) took the title in 3:48.60. Luke Bailey (NSW) placed second less than a second behind in 3:49.38, while emerging athlete Cory Crombie from Western Australia clocked 4:20.79 for bronze.

“Luke and I had a little chat to each other about how we work this race. Luke went out pretty hard and I had to chase a fair bit because I didn’t have the best grip. Eventually got in there and thought it was a little too wet to draft today so I thought I’d sit out in lane 2 and see what happens.

Victorian rising star Graeme Frislie continues to go from strength to strength on the track, winning his first omnium national championship to draw the curtain on #TrackNats22.

Frislie prevailed by 12 points over his nearest rival in James Moriarty (QLD) at the end of the points race to claim a memorable green and gold jersey.

“This is probably one of the biggest wins that I’ve had so far, so it’s pretty special,” Frislie said.

“To have such a quality field here tonight and go out there and really be racing from the gun all the way to the last lap is pretty special.

Melbourne Vixens walked away with the four points in a scintillating Game 1 of the Sargeant-McKinnis Cup, defeating NSW Swifts by five goals 48-53 at Ken Rosewall Arena.

Kate Moloney showed her defensive attributes throughout the game stealing two intercepts in the third term, while Kate Eddy worked in overdrive to nullify the influence of Tayla Fraser.

Hannah Mundy brought plenty of energy in centre, but a late push from the Swifts in the dying minutes of the third quarter saw them bring the deficit back to 11 goals.

With the pressure on in the final term, the Vixens dug deep with Samason returning to steady the ship in attack. The momentum started to shift in favour of the Swifts, with the home side reducing the margin to four goals with just five minutes left to play. But the Vixens stood strong with player of the match Liz Watson maintaining composure to guide her side to victory.

Round 3 sees the Vixens take on GIANTS Netball at John Cain Arena next Saturday 9 April. Tickets are available now via Ticketek.