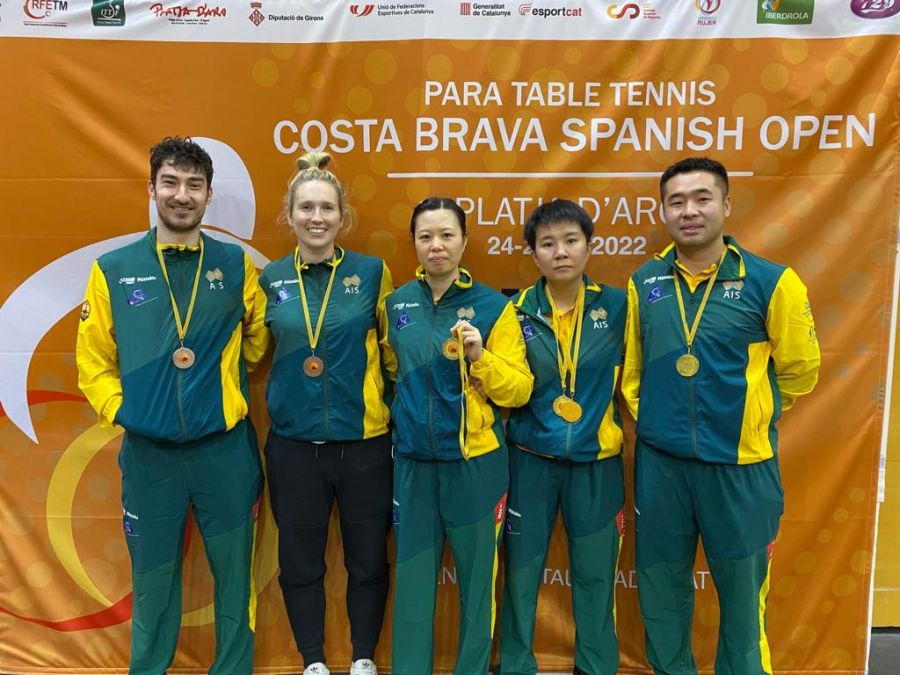 In VIS Sport, The Para-table tennis Australian team dominated in Spain, as the Melbourne Vixens started their season with a win. Meanwhile, a couple of boxers secured their spot in the national team after winning gold at the selection trials.

The Spanish Para Open in Platja dÁro, Spain has come to an end with our National Team (Para) finishing the three-day event with seven medals - four gold and three bronze.

Qian Yang brought home the first gold medal of the day one in the Class 10 Women's Singles. After bettering teammate Melissa Tapper, who would take bronze, 3-0 in the semi-final, she met five-time Paralympian and the ever dominant Natalia Partyka in the final.

Over in the Class 9 Women's Singles, Lina Lei won her semi-final against Hungary's Alexa Szvitacs, a re-match of their Tokyo 2020 semi-final, to secure her place in the final, which she went on to win in five sets.

Australia also picked up bronze in the Class 9 Women's Singles after Ma Lin went down to Great Britain's Joshua Stacey in a semi-final that went to five games.

After going down 9-11 in the opening game, Lin, a two-time Paralympic silver medallist, was able to win the next two before Stacey won a close fourth and fifth to seal his spot in the final.

On the final day Lei and Yang continued their golden run at the Spanish Para Open with victory in the Class WS20 Women's Doubles.

After topping their group standings - winning all their matches 3-0 and then winning the semi final - the Aussies came face-to-face with Poland's Natalia Partyka and Karolina Pek, who Lei and Yang had beat in their respective women's singles finals yesterday, there was no doubt it was going to be another enthralling match.

After the Polish pair took the first game 11-7, Lei and Yang rattled off three straight games to secure Australia's fourth gold medal of the event.

Earlier in the day, Yang had paired with Ma Lin for the mixed doubles class XS20 to win gold after topping their group.

In the Class XS17 Mixed Doubles, Natahn Pellissier and Lei topped their group without dropping a match, they continued their fine form into the knockout stages, but were undone in the semi-final. The pair went on to secure bronze.

The Vixens have kicked off season 2022 in style, defeating the Queensland Firebirds by five goals (65-70) in a high-scoring hit out in Brisbane on Sunday afternoon.

Star recruit Kiera Austin debuted as Vixen number 58, returning for her first SSN match since rupturing her ACL in May last year.

Head coach Simone McKinnis was pleased with her side’s performance after a long pre-season, noting the important role played by both debutants.

“Liv’s got some great elevation… she’s been super right from the word go since she joined us, I’m excited for her that she’s been out on court.”

“It was a real positive for us having Kippa starting the game, and Rahni coming on really well. We’ve got some really nice flexibility in that shooting circle that we’ll keep building on.”

A clash with the reigning premiers awaits the Vixens in Round 2. They take on the NSW Swifts on Saturday 2 April at Ken Rosewall Arena in Sydney.

The Vixens’ first home game will take place in Round 3 against the GIANTS at John Cain Arena on Saturday 9 April – tickets are available now via Ticketek.

Kristy Harris (50kg) and Caitlin Parker (75kg) have both secured their spots on the Australian team for the Commonwealth Games and World Championships for 2022 after winning gold in their weight classes at the selection trials.

"After an eventful 2 years and no comp, I’m stoked to say I got myself a Gold in the 50kg division at the 2022 World Championships and Commonwealth Games qualifiers." Harris said.

Both Harris and Parker will compete in the Australian Women's team that will participate at the 2022 IBA Elite Women's World Championships to be held on 6 to 21 May in Instanbul, Turkey.

At the 2022 World Athletics Championships earlier in the month, near misses on the track and a new Australian record show much promise as athletes look ahead to a year filled with major championships.

Australian record holder of both the indoor and outdoor 800m Catriona Bisset had a phenomenal debut indoor season, with three podium finishes on the World Indoor Tour, but narrowly missed out on her first Championships medal, placing fifth in 2:01.24.

Up against tightly packed field, Bisset knew she would have to think tactically but a slow start to her race and a decision to stay out wide over the four laps of the indoor track meant she was unable to catch the race leaders, despite coming close on the final bend.

"I felt really excited going into this race. A lot of the time I get nervous and think to myself that I can't wait for it to be over, but whenever I thought about this race, I got really excited. That's a big step forward, feeling like I belong. Obviously I'm disappointed with the result but that also means I really wanted it," Bisset said.

Linden Hall was in for a battle, with a tough field shaping the 1500m final. An Ethiopian trifecta saw Gudaf Tsegay claim a new Championships record of 3:57.19, with all top three running sub 4:04, but the Australian was patient early in the race, while the rest of the field tried to keep up with Tsegay.

Hall moved forward from the very back to sixth place and recorded an indoor personal best of 4:06.34.

“I didn’t love getting caught at the back at the start, but I quickly realised how quick this race would be and it was probably a good thing to be there, so I was confident that I’d be able to move back to through the field and chip a few off as I went,” Hall said.

“I didn’t have the ideal lead up to this Championships but we still got what we wanted from it and race experience, which was probably the main goal coming over rather than run fast times. It will be beneficial come Eugene and Birmingham later in the year.”

The quartet of Blake Agnoletto, Graeme Frislie, Jordan Villani and Henry Dietze (Jackson Hribar rode qualifying) were flawless in their chase of the Queenslanders, finishing with a time of 3:56.852 despite making the catch with half a lap to go.

Victoria laid the foundations for gold from the get-go in the final, placing Queensland under pressure with a rapid opening kilometre that had Queensland chasing from lap one.

The pressure placed on Queenslanders James Moriarty, Liam Walsh, Declan Trezise and Kane Richards proved too much to handle, with their line splintering in the final kilometre.

Victorian Henry Dietze was ecstatic to claim his second team pursuit national title, after not knowing he would even ride the event earlier in the day.

“We weren’t really sure if we were going to run me in the final, we had Jackson (Hribar) in the heat instead of me, and we qualified second,” Dietze said.

“It was more or less that we saw we had a good four seconds minimum that we could improve on just through little mistakes because we haven’t really ridden a whole lot together as a team.

“The aim was to go out on schedule, which was a pretty fast schedule for what we wanted to do, with the idea of putting them under pressure instead of them putting us under pressure to make them have to do chase back to us.

“They were always in our peripheral and we saw we were just getting closer and closer and never slowed down and kept on going.

“Last year we did a 3:58-something and this year we went quicker, so we were already pumped to win and then to see that time was just the cherry on top.”