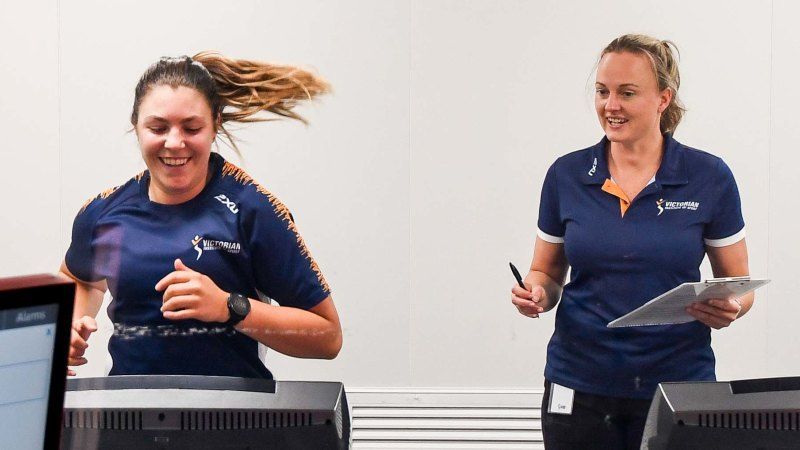 International Women’s Day (IWD) is a time to celebrate women in all their diversity. A time to reflect on the achievements and the progress made by those who came before us, those who stand beside us, and the generations to come.

The theme for IWD 2022 (8 March) is “breaking the bias” - a call for all to help create environments where difference is valued, celebrated, and women's equality is an undeniable reality.

The Victorian Institute of Sport (VIS) is a proud champion of women and recognises the significant contribution women make to high performance sport.

The VIS is committed to a diverse workforce and a place where all people feel welcome and valued for the experiences they bring to their role.

Recently, the VIS commenced work on the implementation of the Gender Equality Act 2020.

The Gender Equality Act has been introduced into all Victorian public sector employers and requires employers – including statutory authorities, agencies, local councils and universities – to improve gender equality in the workplace, and requires reporting that will include workplace gender audits, a gender impact assessment for services provided to the community and ongoing Gender Equality Action Plans (GEAP).

“We are extremely proud to be a successful organisation that demonstrates female leadership every day, our participation in developing a Gender Equality Action Plan (GEAP) is part of our commitment to ensuring genuine gender equality and to realising that women are afforded opportunities across the organisation,” said VIS CEO Anne Marie Harrison.

To mark IWD 2022, we shine a spotlight on some of our VIS female performers who are achieving and enjoying great success in sport, life and their chosen careers.

While she works with all athletes, Alice has a particular focus on combat, cycling, swimming and the individual athlete program.

As a VIS rowing program scholarship holder from 2005 to 2016, she credits the VIS for both bringing out the best in her as an athlete, and supporting her in sport and life, through the challenges across years of being an elite athlete.

Alice was a World Champion rower in the lightweight women’s events, with over a decade on the Australian Rowing Team – including qualifying for the London Olympic Games.

The VIS supported Alice to balance a dual career of rowing and study. She completed her medical studies at The University of Melbourne, then began formal medical training through The Royal Melbourne Hospital, completing her Certificate in Emergency Medicine (ACEM).

She was driven back to sport and exercise medicine, influenced heavily by her experiences at the VIS with its wellbeing and performance focused environment, and the dedication of the team around the athlete.

As part of her training, Alice is completing her research with the AIS Female Performance and Health Initiative about the menstrual cycle and performance.

Stacia, who played 42 games for the Hockeyroos, is the Head Women’s Hockey Coach at the VIS, and mum to two children, Lottie and Finley.

A qualified physical education teacher, Stacia is now in her sixth year as head coach at the VIS.

Her role is to provide an elite daily training environment that enables the hockey athletes to achieve sustained national and international success on the pitch, and also have the opportunity to excel in life away from it.

Stacia has a long and highly regarded history with hockey in Australia.

She broke into the Australian women’s national team in 2009 and played in that year's Champions Trophy, where the Hockeyroos finished runners up. She also competed at the Oceania Cup and was part of the 2012 Australian Women’s Hockey Squad for the London Olympics.

A long-term VIS scholarship holder (2005 to 2014), Stacia captained the Victorian Vipers to a gold medal at the 2012 Australian Hockey League tournament and a bronze medal finish in 2015.

Stacia thought she might have to give coaching away when she became pregnant with her daughter in 2017.

However, the following year she was one of eight high performance female coaches who took part in the AIS’s development program during the Gold Coast Commonwealth Games. It was there, among other women in her position and with mentors such as Ellen Randell (rowing) and Tracey Menzies (swimming), she realised she could have her coaching career and grow her small family too.

In 2019 she was involved in the inaugural AIS High Performance Coach Talent Program in 2019 and maintains great relationships with all the women involved in the program and its facilitators.

More recently, Stacia was appointed as the Head Coach of Australia’s Under 21 Women’s Hockey Squad, the Jillaroos. The mother of two performs the role on a part-time basis on secondment from her position at the VIS and relishes the opportunity to be heavily involved with the current crop of aspiring Hockeyroos.

Co-Captain of the Melbourne Vixens, Liz Watson made her debut for the Victorian outfit in 2014 and has since won two Championships (2014 and 2020), as well as been twice awarded the Vixens’ most valuable player, the Sharelle McMahon Medal. In 2018, she was awarded Australian netball’s most prestigious award, the Liz Ellis Diamond.

After helping the Vixens win the Premiership in 2020, the midcourter was devastated to learn she would be sitting on the sidelines in 2021, due to a foot injury sustained during national squad duties.

However, Vixens’ fans watching Watson in her return to the international court during the 2022 January Quad Series, were excited to see her get right back into the swing of things, holding onto hope that her domestic comeback will mean they’re in the mix once again for a finals berth.

The recently appointed and highly respected Australian Diamonds Captain is no doubt the best wing attack in the world game and believes she can get even better.

While she was unable to play, Watson continued to play an integral part with the Vixens leadership group and ended the year on the bench next to coach Simone McKinnis.

She believes the insights and perspectives she gained from the sideline will help her own game.

VIS Lead Sport Scientist, Sylvie Withers, whose parents were Olympic rowers, was training to qualify for the Australian rowing team, before she realised that she wouldn’t make it to the Olympics. It was then that she decided to help others achieve their Olympic goals.

Her sport science career started with a 12-month work placement at the VIS in 2007. The traineeship led to a part-time job and over time, her position developed into a full-time role.

Sylvie has worked with a number of Olympic and Paralympic athletes across a range of different sports during her 14 years at the VIS. She loves the challenges that different sports present and then problem solving to find solutions and interventions that enable athletes to excel.

Sylvie is passionate about empowering female athletes by expanding knowledge on female-specific physiology, and interestingly was the first ever female boat captain at Melbourne Uni Boat Club (MUBC) in their 150 year history!

Jess is an Accredited Sports Dietitian with experience in the hospital and private practice setting.

Her passion and excitement for supporting athletes, as well as individual health, stemmed from her experiences growing up on a dairy farm in regional Victoria, as well as competing internationally in the sport of race walking.

Jess enjoys working with individuals of all ages to develop realistic and achievable strategies that are complementary to their lifestyle and training/competition goals.

Jess works at the VIS with the Athletics Program and is the High Performance Nutrition Lead for Athletics Australia. She consults two days a week with Olympic Park Sports Medicine Centre and over the last few years, Jess worked with the VIS Women’s Hockey Program, was the in–house Sports Dietitian at Sports Dietitians Australia (SDA) and also worked with the AFLW Richmond Football team.

Outside of her work, Jess has a passion for flowers, having worked in a florist for a few years. She is often called upon by friends and family to do their wedding flowers.