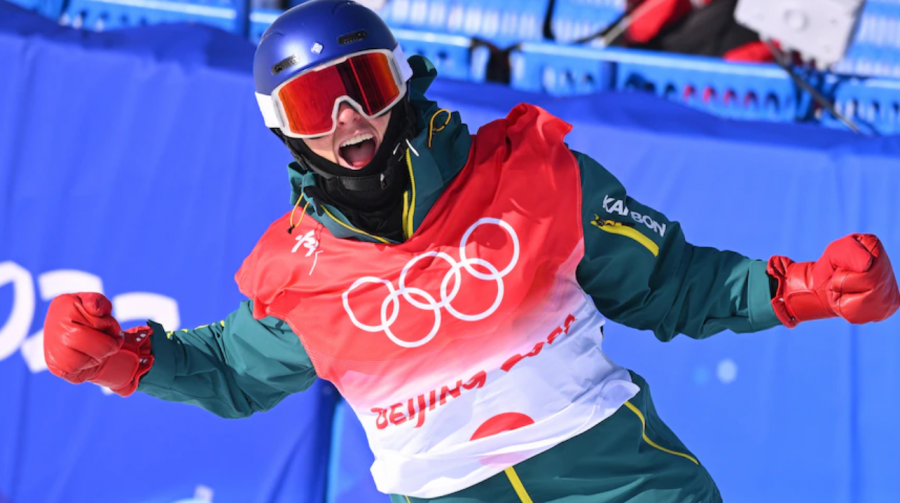 Home News WEEKEND WRITE-UP: Olympics wrap up in Beijing as records tumble on the track

In VIS Sport, the Winter Olympics wrapped up over night in Beijing as Australian records tumbled on the athletics track. Our Para-swimmers returned to pool-deck and India Robinson impressed in Hawaii.

The Winter Olympics in Beijing wrapped up over night, click HERE to view updates on our Victorian Institute of Sport scholarship holders as they happened. The ceremony marked an end to the most successful ever Winter Games for Australia, finishing with one gold medal, two silvers and a bronze.

Scotty James headlined Beijing, in arguably one of the most anticipated event of the Games, the snowboard half pipe, where he won a well-deserved silver medal.

Scotty was thrilled to win a silver medal for Australia with a score of 92.50, with Japan's Ayumu Hirano only better with a 96.00 to take the gold.

"I feel amazing. If you had of said to me a long time ago that I would be a two-time Olympic medallist I would have said that you were dreaming." Scotty said.

"I was really happy and proud with my second run. It's the most technical run I've ever done in my life and that was my vision today. I was super happy that it put me on the podium."

Australia’s Paralympians made a sensational return to competition at the Melbourne 2022 Para Swimming World Series.

It was the first major meet for the host nation’s athletes since the Tokyo 2020 Paralympic Games last August, and they did not disappoint.

Ahmed Kelly, Paralympic silver medallist, shaved six seconds off his heat time in the 150m individual medley SM3 to win in 3:08.93. As the only competitor in the event, he said he was racing the clock and “focusing on my skills to drop the time from the heats to finals.”

The 30-year-old added: “I’m really focussing on my life balance post-Tokyo and enjoying working and continuing to swim. I will be there in Madeira for Worlds this year and ready to beat the world as we look forward to Paris 2024.”

It's been a big couple of weeks of athletics for our Victorian Institute of Sport scholarship holders. Highlighted by Jemima Montag who broke an 18-year-old national record and won her third consecutive national championship at the Oceania & Australia 20km Race Walking Championships in Adelaide.

Walking at record pace within the first 5km, Montag finished the walk in 1:27:27 - 13 seconds ahead of Jane Saville's long standing record from 2004.

“It feels surreal at the moment, that national record is something I have been thinking about for a few years, but we’ve had the pandemic and cancelled races. Often at times it hasn’t been the right weather or right conditions, it wasn’t what I had in mind but I could feel it was on in the first 5km," Montag said.

Catriona Bisset is also the proud owner of a new record, and now has both the 800m outdoor and indoor records to her name, after shattering Tamsyn Manou’s 2008 record by more than two seconds in Birmingham. Bisset’s 1:59.46 run is her second fastest time recorded and puts her in good stead for selection for the World Athletics Indoor Championships next month.

Bisset’s training partner, Linden Hall also had a strong start to her indoor campaign, clocking 4:07.36 in the 1500m as she warms up for the season ahead. So far Hall has qualified for the World Athletics Indoor Championships and the World Championships in Oregon, and the PUMA athlete will look to improve upon her sixth place from Tokyo and win back the Australian record from compatriot, Jessica Hull.

It was a race of the fittest as rising wheelchair track star Sam Rizzo beat out his coach, Paralympic gold medallist Richard Colman in the 1500m T54 event. Rizzo crossed the line in 3:47.81, while Colman placed second in 4:05.83.

Victorian Institute of Sport scholarship holder India Robinson continues to impress in her debut season on the women's championship tour with a quarter final finish at the Hurley Pro Sunset Beach event. Robinson managed to defeat some of Australia's best female surfers including Steph Gilmore and Sally Fitzgibbons on her way to the quarter final where she was narrowly knocked out by USA's Bettylou Sakura Johnson.

Victorian Institute of Sport scholarship holders Katharina Haecker and Aoife Coughlan showed grit and strength for Team JudoAus on the big stage at the Tel Aviv Grand Slam over the weekend.

For the second consecutive event, Aoife Coughlan again found herself in the semi-finals of the Women’s -70 kg Division. Her opponent this time was Shiho Tanaka of Japan. The two competitors were poised to secure their spot in the gold medal match and fought with great determination, but it was Shiho who would claim the victory after Coughlan was given a third Shido with 12 seconds remaining in the contest.

Coughlan’s bronze medal match saw her face off against the IJF World #2 and former world champion Marie Eve Gahie of France. The match started quickly with Gahie on the offensive first which led to a quick shido that was given to Coughlan for avoiding her opponent’s grip. As the match continued, the French competitor continued to steer the tempo, searching for an opening, and nearly landing several strong takedowns but Coughlan was too strong. The resilient Australian was able to move quickly and avoid Gahie’s attacks, a tactic that would ultimately lead cost her as she was given a third shido with six seconds remaining in regulation time.

Competing in her first event of the season, Katharina Haecker cruised through her opening match up in the Women's -63kg Division, before she was narrowly knocked out in the second round after a restart against Germany's Nadja Bazynski. She attempted several takedowns, but the German foiled her plans and was able to avoid giving up a score to the Australian. As time expired in regulation, it was Bazynski who would claim the victory by Waza-ari, but Haecker showed tremendous fight and determination in the loss.