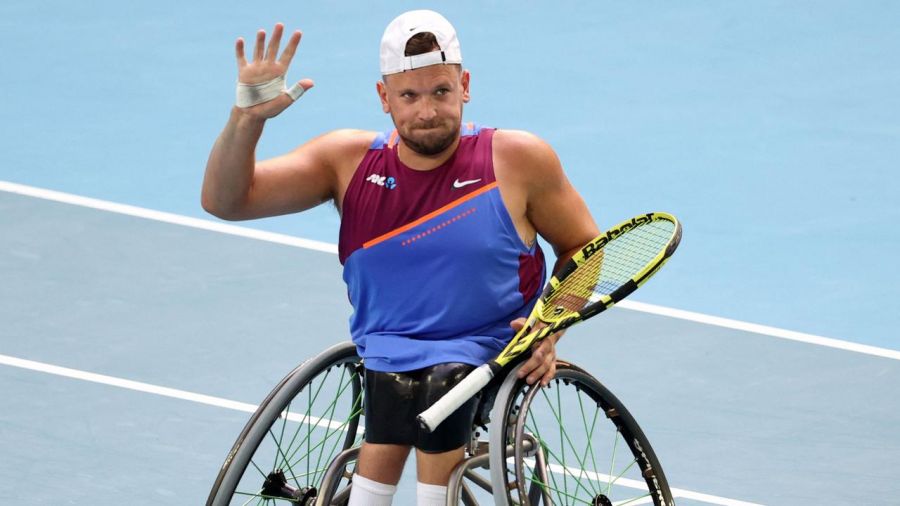 Home News WEEKEND WRITE-UP: Thanks for the memories Dyl & Rach

In VIS Sport, Dylan Alcott ends his career with a runner-up finish at the 2022 Australian Open, as several VIS scholarship holders were crowned national champions in what was a busy week of sport.

Dylan Alcott dreamed of making a difference – and there’s no doubt he did.

The world No.1 inspired many during his incredible professional tennis career. This included Sam Schroder, a 22-year-old from the Netherlands, who spoiled Alcott’s farewell by posting a 7-5 6-0 victory in the Australian Open 2022 quad wheelchair singles final.

“You’ve done a great job inspiring the world,” Schroder said to Alcott during the trophy presentation. “I hope to one day to be able to do just one small part of that as well. So thank you for all that you’ve done.”

An emotional Alcott thanked the tournament, his team and his fans for their support throughout his career.

“I’m really the luckiest guy in the world and I didn’t need to win today to realise that,” Alcott said.

“It would have been nice to win, to be honest. But I’m still the luckiest person I’ve ever met. I’m the luckiest guy in this country, if not the world, to live the life that I live.”

Alcott retires as one of the sport’s all-time greats. His remarkable feats include becoming the first male tennis player in history to achieve a Golden Slam (winning all four major titles plus a Paralympic gold medal in a single season).

The decorated career of one of the Hockeyroos’ longest serving players has come to an end with goalkeeper Rachael Lynch announcing her retirement from international hockey.

Since debuting for the Hockeyroos in 2006, Lynch has made 233 appearances in an international career spanning 15 years to leave her as Australia’s most capped goalkeeper ever.

Retiring as a dual Olympian, among Lynch’s list of career achievements include being a two-time Commonwealth Games gold medallist and being named the International Hockey Federation (FIH) Women’s Goalkeeper of the Year in 2019.

Over her career the 35 year old proved one of the best shot stoppers in world hockey and exceptional when it came to performing on the tense stage of penalty shootouts.

After competing at last year’s Tokyo Olympics where she helped the Hockeyroos go through the Group Stage undefeated, Lynch has decided the time is right to call it a day on the international scene.

Roseman-Gannon delivered her promise – a stage win on Tuesday - since taking overall lead in the race on Sunday after finishing third overall at the 2021 Festival of Cycling.

Roseman-Gannon winning the Be Safe Be Seen stage 3 Lobethal to Lobethal capped off a stunning three days of racing after the Victorian star was crowned the Elite Women National Criterium champion 11 days ago at the 2022 Federation University Road National Championships in Ballarat.

“I always wanted to win the stage and we did it, it was a dream job,’’ Roseman-Gannon said.

“I think we got better as the week went on, it’s hard taking all the glory, but it was the team which got me this one.

“I put a lot of pressure on myself, and I guess I care so much, but as soon as the race starts, I’m in the zone and I don’t think much, it just happens.”

Roseman-Gannon earned a hat-trick of Festival of Cycling jerseys to keep on Tuesday including the ZipTrak Sprint jersey.

There was plenty of action at Penrith Whitewater Stadium for the final day of competition at the 2022 ICF Oceania Canoe Slalom Championships, with the C1 finals and debut races of the new Olympic discipline Extreme Canoe Slalom.

Victorian Institute of Sport scholarship holder Tristan Carter was the fastest man in the men’s canoe, finishing 1.52 seconds in front of Kaylen Bassett to claim the gold medal.

Having had a nervous wait for the final results as he crossed the line, Carter said it was worth the wait for the ultimate outcome.

“I am so stoked to be walking away with a gold medal after the year we’ve had and the challenges we’ve faced,” Carter said.

Young gun Mark Crosbee also returned to national competition in style. After having missed the last two years due to the ongoing COVID-19 pandemic he wasted no time on the water, winning the Junior C1 Oceania Championship, placing runner up in the u/23 age group and fourth overall.

Earlier in the competition, in the K1 category, Seb Montalto was named the Junior K1 Oceania Champion, also placing 1st in the U/23 age group and fifth overall.

The IJF World Tour kicked off in Almada, Portgual this weekend, which included some of Australia's best judo athletes.

On the opening day of competition VIS scholarship holder Joshua Katz made sure the year was started with a bang for Team JudoAus defeating Andras Vida of Hungary in the Men's 60kg Division. But Katz's run came to an end in the second round when he was defeated by Mongolian, Tsogt-Ochir Byambajav.

Unfortunately for Josh's brother Nathan Katz, although awarded a first-round bye due to being one of the higher seeded Men's -66kg Division judokas, when he faced off against his opponent Freddy Waizenegger, from Switzerland he was unable to progress.

It was a similar story for Tinka Easton also being removed in the second round after an epic second-round match with Marie Siderot of Portugal in their Women's -52kg Division matchup.

On Day 2, Jake Bensted came out poised to make a run at the finals when he defeated Hungarian Bence Boros in their Men’s -73 kg Division match-up. But, even after a strong start in the second-round draw, Spain's Salvador Cases Roca eventually forced the Australian onto his back.

Overall, it was so fantastic to see the Australian's back in action, for what has been a long time off due to the ongoing pandemic. Congratulations to all athletes.

The first national track and field champions of 2022 have been crowned, with Rose Davies and Jack Rayner clinching the Australian 10,000m titles at the Zatopek:10 meet at Lakeside Stadium last week.

Jack Rayner won his first national title on the track running 28:16.86 over 10,000m. Having placed second last year, the Tokyo marathoner was hungry to step atop the podium but had his work cut out for him over the 20 laps, facing off against the evergreen David McNeill in the final two laps.

While Rayner hopes to race more 10,000m events this year to get his time closer to the World Athletics Championships qualifying standard of 27:28.00, his goal is to tackle the marathon at the Commonwealth Games.

“The Tokyo marathon was the first race I haven’t finished (due to a stress fracture), but I’m glad I was able to bounce back. It’s given me a bit of motivation and I’ve taken training to the next level now. I want to show what I’m capable of so the goal is to run the marathon in Birmingham.”

In other results from the Athletics Victoria meet, Australian 800m record holder Catriona Bisset made her season debut, clocking a swift 2:01.20 to kickstart a big year ahead.

The result puts her back on track nearing her Australian record after a heartbreaking campaign at the Olympics where she narrowly missed her chance to advance to the semi finals.

“I mean it broke my heart – it was one of the hardest things I’ve ever been through. I’m still processing it but it’s made me a tougher athlete. It really changed me as a person. I’m not just a runner anymore,” she said.

After recently qualifying for the Women's Championship Tour, India Robinson made her debut at the Billabong Pro Pipeline in Oahu, Hawaii over the weekend with  great success.

Robinson was able to advance to the Round of 16, and will come up against fellow Australian, Tyler Wright in Heat 2 in the upcoming days.