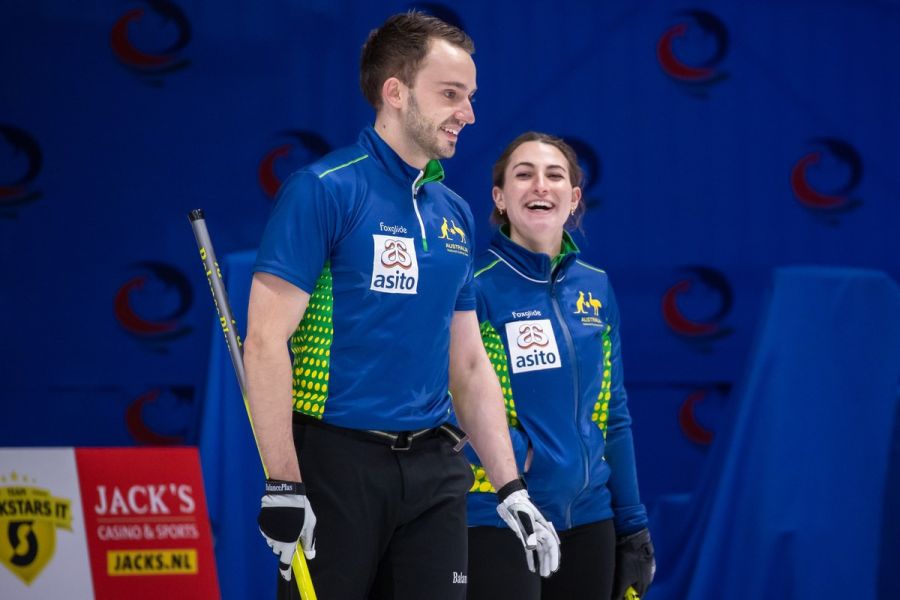 ​Dean Hewitt insists that the multidisciplinary team at the Victorian Institute of Sport (VIS) is a “crucial” reason as to why he’s about to create history and become one of Australia’s first ever Winter Olympic curlers with his teammate Tahli Gill.

With no official curling ice in Australia and interruptions from continuous Victorian lockdowns, the odds have been stacked against the pair from the beginning.

“When we’re in Melbourne, we only get to train once a week on the ice which is difficult for a national team, especially when you’re playing against teams that train on the ice more than once a day.” Hewitt said.

But with the ongoing support of the VIS, Hewitt had every confidence that he would still be able to achieve his dream of representing Australia at the 2022 Beijing Winter Olympics.

“The multidisciplinary team that works with me at the VIS is fantastic and always has me ready for the big events.” Hewitt said.

“Their [VIS services] willingness to explore initiatives and training techniques that are outside the box has taken performance to the next level, especially when I didn’t have access to ice in 2020.” Hewitt said.

Since receiving his VIS scholarship in 2019, Hewitt has embraced all the different services that the VIS has to offer, which have all been working collaboratively to help him set and accomplish his goals.

With the approval of his proposal for the VIS to purchase a ‘Smart Broom’ (a piece of technology that records data and analysis of sweep efficiency in real time) he was able to set targets that would allow him to improve his overall performance.

“The ‘Smart Broom’ is essentially a mini-force plate attached to the head of a broom.” Hewitt said, “this measures a combination of the pressure and velocity of the broom head on the ice.”

“The data that was able to be captured included aspects such as foot placement and movements, weight distribution, grip placement on the broom, broom angle, hip height and angle and broom head positioning under the body.”

“One of the key goals was to turn Dean into a more efficient sweeper,” Juhari said. “Majority of his program in the gym is predominantly around building his upper body strength and his power, as the most physically demanding part of the sport is the sweeping of the ice.”

VIS dietitian Elaine Bo also aided Hewitt with nutritional strategies that would allow him to increase his upper body muscle mass and be able to manage the demand of heavier training loads.

“My role was to provide the nutrition strategies to facilitate the increase in muscle mass.” Bo said. “This included ensuring Dean was consuming enough kilojoules throughout the day and extra on his heavier training days; along with strategies to achieve this.”

“He was able to successful gain the muscle and the goal shifted to maintaining it whilst he trains internationally.”

With limited access to training on ice, Juhari says that some of the biggest obstacles Hewitt had to overcome was emulating training on ice and making sure he was still able to work on the technical side of his training.

“The rest of the training was either done on a sliding board or a sweeping session at home on his tiles.” Juhari said. “So when you consider all these things, the achievement is incredible and a credit to the amount of time and effort he’s been able to put into himself and training.”

More recently, Hewitt has been working with VIS sport scientist Sylvie Withers, who armed him with different jet lag strategies that would allow him to be in peak condition when moving from country to country to perform at his best.

“Travelling across time zones is an area that is often difficult to get right,” Withers said. “Jet lag can negatively impact performance if proper planning is not conducted.”

“Dean was travelling from Calgary to the Netherlands for the Beijing qualifiers, with a quick turnaround between arrival and competition.”

Head of science at the VIS, Harry Brennan says “the support Dean has been receiving has been performance driven, collaborative and thorough and an excellent example of using an interdisciplinary approach to identify and address performance gaps and achieve results.”

“The VIS, Olympic Winter Institute of Australia and the Australian Curling Federation will continue supporting Dean whilst he is overseas and carry all the way through to Beijing.” Juhari added.

Hewitt had nothing but praise for everyone that has supported him on his journey to Beijing and insists that the work has finally paid off.

“We’ve been working so hard over the past few months and the past couple of years, and it’s all paid off.” He said. “We’ve had so much support from home and we can’t thank them enough.”

“It’s such an exciting time and we’re hoping that this can really build curling in Australia. This is for all the Aussie curlers out there, everyone who has supported us and for all those new curlers who can now have a platform to play more.”

Hewitt and his teammate Gill will now head to Canada to get some more training in before they head to Beijing for the 2022 Winter Olympic Games, with their event commencing February 2nd, two days prior to the Opening Ceremony.