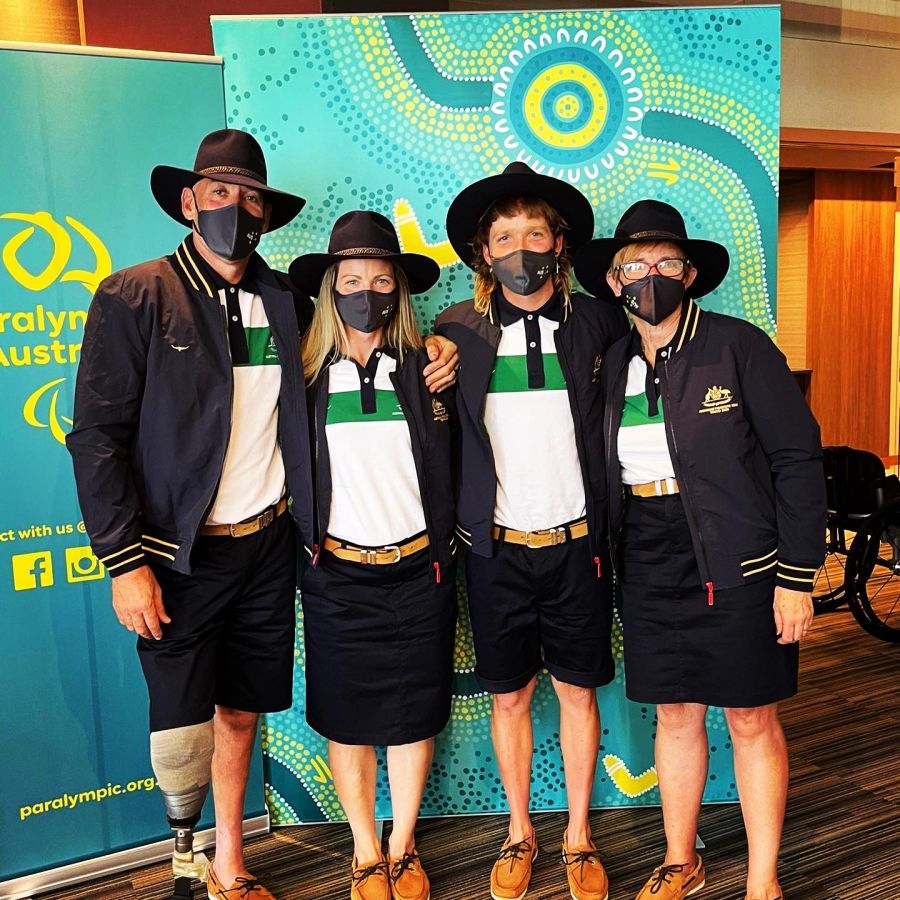 Carol Cooke AM, a three-time Paralympic gold medallist, arrived in Tokyo as the athlete to beat. For Cooke, Tokyo turned out to be a Games like no other, for many different reasons.

We caught up with her post Games to hear all about her Paralympic Games experience:

Tokyo…It was a long time in coming! With the postponement of the 2020 Tokyo Paralympics it seemed like forever for the Games to come around and then all of a sudden they were here.

For me the postponement of the games wasn’t a massive deal like most athletes. I hadn’t put my life on hold or put a career or education on hold to compete. I guess the only thing I worried about was still being competitive with another year of age under my belt. My biggest question was, “as a 60-year-old would I still be competitive?”. So, with that in mind I continued to train probably even a bit harder.

By doing that I ended up pushing myself over the edge in terms of health and I had my first MS relapse in almost 13 years. Luckily enough I was able to get through it and come out the other side without too much of a loss of fitness.

At the end of June, I relocated to Brisbane as I wanted to make sure I could be on camp with the team and not be stuck in lockdown. It was hard saying goodbye to my husband Russ and my beautiful border collie Jack, we had spent the last 15 months together! But I knew it was important to just be able to focus on what I had to do.

The Tokyo Games were certainly like no other. In saying that, each Games I have been to have been completely different from one another. I wasn’t too worried about having no crowds because as a Para cyclist a lot of our races are done with minimal crowds.

There were quite a few races overseas this year, a World Cup and World Championships, although we hadn’t gone to any of them. It was disappointing to lose my World Championship titles without being able to race for them again. But I was able to see the courses my competitors raced on and their results. As none of my competitors knew how fast I was riding, I decided to think of that as my superpower!

We had been able to race the Time Trial course for the last 15 months on the virtual platform FulGaz and no one else in the world had! So, I was very confident going into the time trial.  On the day of the race, I was quietly confident and went out and gave it everything I had. However, everything I had was only good enough for a silver medal which I can’t be unhappy with. The German rider who won, loves climbing and is about 50kgs so gets up those hills a bit fast than my 64kg frame!

I still had the Road Race to look forward to and on that day the weather wasn’t the best. There had been a torrential downpour in the morning during racing and it was still raining and slightly foggy when our race began, but it wasn’t anything I hadn’t trained in.

Unfortunately, the Canadian cyclist in front of me crashed trying to navigate a corner and being right behind her I had nowhere to go but hit her. I knew it was going to happen, said a few choice words and then tried to relax into it.  I honestly believe that this saved me from breaking any bones. I did however puncture my lung with the force of hitting the ground at around 45 km/hr.

As most people might know I did get back on the trike but realised that I wouldn’t be able to continue, but I was able to get back to the start/finish line 9 kms away and pulled out of the race.

I do like to take a couple of positives away from every race, even if its not great. From this race I had a couple of firsts – my first DNF ever in a race and my first ever crash in a race, so I am hoping that neither of them happen again.

Not finishing the Road Race has left me feeling like there is a bit of unfinished business! So I’ll take each year as it comes and who knows, maybe I’ll be able to be there in Paris to rectify that feeling!