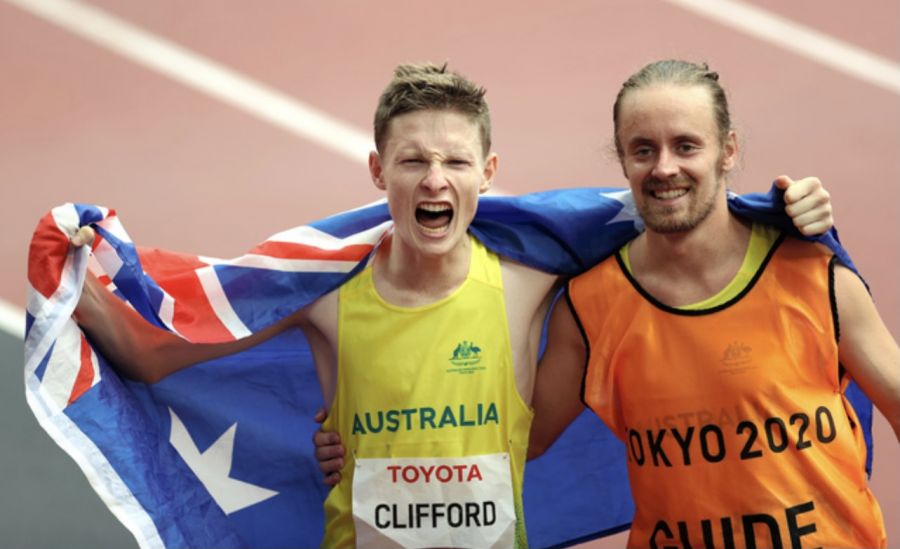 “From the first time we used the guide rope, it seemed to work perfectly” - Tim Logan

Jaryd Clifford returned to Australia as a three-time Paralympic medallist, winning silver in both the T12/13 Marathon and the 5000m, and a bronze in the 1500m.

Initially Clifford, who is a visually impaired athlete, qualified for his favoured events the T12/13 1500m and 5000m. But, leading into the Tokyo Paralympics, Clifford “accidentally” broke the Marathon world record at the Sydney Grand Prix and secured himself another race at Tokyo. Clifford was running as a pacer for teammate Michael Roegerin the Marathon and didn’t even intend on finishing the race, until he reached the halfway point and was encouraged to keep going. His time was not only a world record but secured him a place in the Marathon event at the Paralympic Games.

After achieving the accidental qualification, Clifford decided that he would still dedicate his training schedule to his favoured events, but thought, why not run the Marathon on the final day of the Paralympics as a bonus?

We caught up with Clifford to hear about how he was able to compete at an event he had never even trained for.

The first 30km of the Paralympic Games Marathon felt like it transpired in the blink of an eye. The final 12km, however, felt like an age, as if time stood still – each step only burying me further into the well of pain enveloping every inch of my mind and body.

In those endless moments, when pain threatened to beat me down, my best mate turned guide-runner, Tim Logan, calmly navigated my path to the finish not only by directing me through the twists and turns of the course, but also by using his voice to remind me that I wasn’t alone on that road, that the pain would soon come to an end.

I’ve won world titles and broken world records, but nothing can beat that Marathon silver – nothing can beat running into a Paralympic stadium after going to hell and back with your best mate, nothing at all.

I knew the wheels were falling off at the 30km mark. Without warning, my body had violently (yes, this is the most suitable word to describe it) convulsed, expelling the contents of all the prior drinks stations and the pre-race snacks. Frankly, I was surprised it took so long. After all, I had once again opted not to train for a Marathon, so what else could I expect? My body yearned for replacement fluids, but I had never trained my body to take them. From that moment on, Tim and I struck a fine balance between the pace my legs could sustain and the pace that would most effectively keep me from descending into further distress.

I remember after the first bout of vomiting at 30km, Tim asked me: “you all good?”

I replied: “yeah, my legs are fine. It’s just my stomach’s not!”. If anyone already knew that other than me, it was Tim with his ringside seats.

At around the 38km mark, the course climbed like the Pyrenees (that’s how it felt at the time), and my body started to cramp. I said to Tim: “I’m starting to cramp”. He replied: “okay, do you want to go faster or slower?”. I then replied: “no, just the same pace”

Not long after this riveting conversation, any remaining energy evaporated almost instantly. Tim could sense this, so he reminded me that if I needed to conserve more energy I could always just close my eyes. Not many people could say that to me whilst running flat-stick through an unknown city, on unknown roads, and yet that moment sums up the trust we’ve built over a decade of running together almost every single day.

As we entered the stadium, my body began to anticipate the indescribable relief of crossing that finish line. It began to cave and my strength wavered as my body took over in the final metres. I collapsed, threw up one last time, Tim slapping me on the back. He picked me up, we embraced, and he gave a fist pump – we’d done it. We’d just run a bloody Marathon at the Paralympic Games.

I went to Tokyo dreaming of gold, for five years I’d almost obsessed over it. I’m disappointed as any athlete would be to fall short of that dream, there were moments when those misses felt like devastating blows. But I’m proud that I fought, proud that I gave it everything, and proud that I got to run on the biggest stage of all.

As Philo said whilst embracing me after my silver in the 5000m: “You’ve got to be proud of that, Cliffy”. I am, I definitely am.

Now, we look to the next chapter. I’m 22 and the one thing that has dominated my teenage years is now behind me, and I can’t explain how liberating that now feels. I didn’t know how I would respond to the aftermath of Tokyo, but I feel rested, motivated and more determined than ever to tick the final box on my whiteboard. It didn’t happen in Tokyo, but I’ll be giving it everything to try make sure I can get it done in Paris.

Thank you to everyone for all your support, and to all those people that have our backs and believe in us even more than we believe in ourselves sometimes, thank you!

Jaryd Clifford insists a key reason he was able to win silver in the men’s T12 marathon was due to help of his guides, one of those being VIS scholarship holder Tim Logan.

Logan spoke to Pinnacle about his Tokyo experiences, and what it was like to guide his best mate to the finish line of the Marathon.

Guiding Jaryd is extremely special and it’s an absolute honour to be able to help my best friend achieve his goals. In a sport that is very individualised on race day it really brings a team element especially as it can be extremely lonely on the road in a marathon.

I wasn’t nervous for myself going into the race, I was nervous for Jaryd as the marathon is still such unknown territory for him, so the goal was just trying to get him to the finish line. The team assumed if he would be able to finish the race a good result would come out of it.

I figured a big positive to having a guide is that when push comes to shove and Jaryd starts to tire, I can try and motivate him and take his mind off the race with words of encouragement or just something completely irrelevant.

A vivid memory I have from guiding the marathon was after the first guide changeover had happened, and for the next 5km Jaryd and I were just talking and catching up on the morning’s events prior to the race.

During the race I was trying to keep Jaryd’s mind off the pain of the marathon, but at around 28km Jaryd started vomiting, kindly enough he directed it away from me. From this point onwards, he was trying to get the fluids at every drink station in even though they just kept coming up.

It was difficult to ever be comfortable with Jaryd completing the race even as we rounded up the hill and into the stadium he was still vomiting and almost staggering along to get to the finish line.

We both felt a profound sense of relief and accomplishment once we crossed the line. To get through one of the most gruelling events and one that Jaryd had not trained properly for and pick up a silver medal at the Paralympics, just to be a part of it all was incredible and is a memory that will stay with me for life.

Jaryd is such an incredible athlete and human, guiding becomes a breeze when you have an athlete as professional as Jaryd, he’s always looking up and researching things to improve the guiding and strategies that we have, he may not have won a gold at these Games but at only 22 years old he’s an absolute champion and has the world at his feet.

Jaryd and I plan to keep running together and continue guiding - it’s such a unique experience that I wouldn’t be able to give up easily, fingers crossed we can make it to Brisbane 2032 to be able to compete in front of a home crowd.