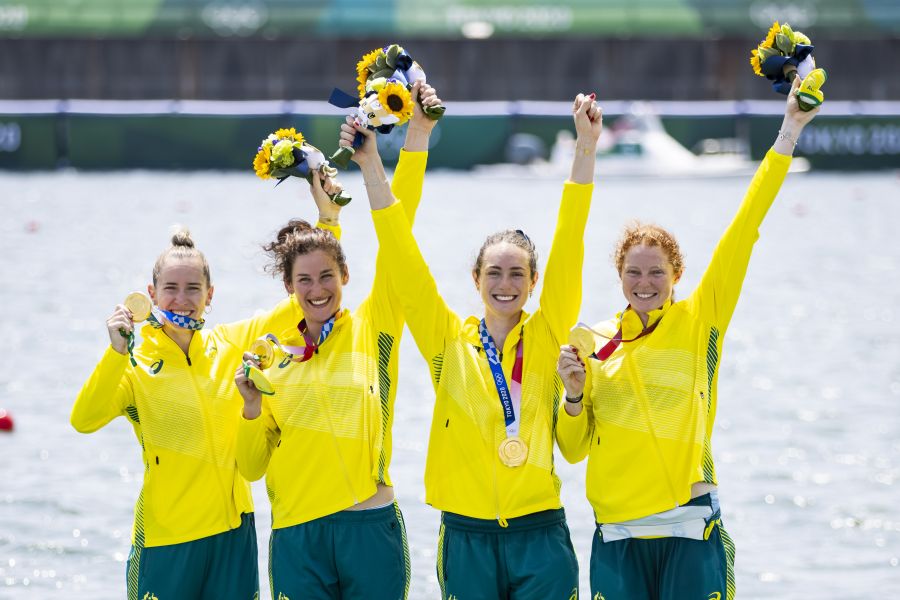 Home News Champions of the World: A countdown to success

“There were a lot of nerves, but we had a lot of trust in one another, it was very much business, stay in the process and trust what we had to do.”  - Lucy Stephan

When the Australian Women’s Four crew crossed the finish line, Jessica Morrison was unsure if they’d done enough to hold off a fast-finishing Dutch outfit, but Lucy Stephan insisted to the crew “we’ve done it.”

A moment Morrison remembers to be “so relieving”, having achieved something she had spent her whole life dreaming about and being able to do it with some of her closest friends made it even more special.

“It’s such a rare opportunity to do something very special and I’m so happy I was able to achieve it with three of my closest teammates,” she said.

While there was a lot of attention elsewhere at the Tokyo International Swimming Center, a trio of VIS scholarship holders – Jessica Morrison, Lucy Stephan, Rosemary Popa – kick-started a historic day for Australian rowing, along with Anabelle McIntyre.

“Our gold medal was the first rowing medal for Australia that day and was promptly followed by another gold in the Men’s Four and two bronze from the Men’s and Women’s Quads Sculls.” Morrison said.

“Later that day the 16 medal winners travelled back to the village wearing our medals and walked a lap of the village celebrating together. It was very special to be able to celebrate our collective triumph together,” she continued.

The Women’s Coxless Four event which had been retired from the Olympic program for close to 30 years, returned to Tokyo in the IOC’s movement toward gender equality. As the Australian Team arrived to the banks of the Sea Forest Waterway in Tokyo Bay on finals day, Lucy Stephan admits that she could sense the four of them were ready to take on the world.

“We knew our rhythm, we knew how to get to the finish line, we didn’t need to practise anymore, we just had to do what we needed to do."

As the crew wait for the starting buzzer, Stephan tells the VIS about the process they go through in the final five minutes on the water.

Although the Australian’s qualified as the fastest team through the heats, they knew they were going to be in for a strong battle, particularly against the Irish and Dutch teams. The girls were able to break the Irish team early in the race, but they could see the Dutch team sitting closely behind, waiting to make their move.

“I could see the Dutch team started coming back on us with around 150m to go, and after we had a bad stroke, I thought that we were going to get silver,” Stephan said.

“But we got straight back on it, and 50m later out of the corner of my eye, I see the Dutch team had about three messy strokes and that’s when I knew that we had this.”

“As we got closer to the finish line, I just kept saying to the girls - enjoy this, we’ve got it.”

An emotional Rosemary Popa dedicated the historic victory to everyone back home who had helped their Olympic dream become a reality.

“I know everyone at home is so, so proud. They’ve been there for all the tears, the ups and downs, so I think this is as much for them as it is for us,” Popa said.