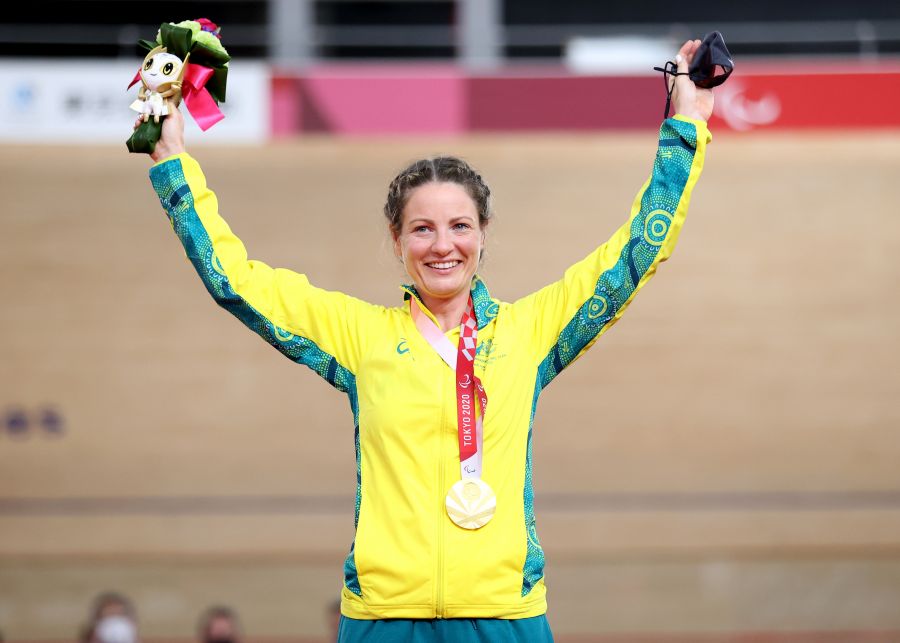 In 2007, following the sudden onset of numbness throughout her body, Emily Petricola was diagnosed with Multiple Sclerosis (MS). She was 27.

Subsequent and frequent MS attacks severely impacted her ability to function as she had before. Further debilitating symptoms, including extreme fatigue, temporary loss of sight and numbness through her body, rendered basic tasks challenging and incapacitated her for a number of years.

Emily’s weight ballooned to 115 kilograms because of her inability to exercise and the large doses of steroid medication used to control her MS. However, encouraged by her network of supporters, she remained determined to keep physically active.

In 2015 some friends suggested she take up Para-cycling (the friends were dual Olympic rower Matt Ryan and five-time Olympic cyclist Shane Kelly!) and a few months into training they were so impressed that they emboldened her to dream big and set a goal to qualify for the Tokyo Paralympics.

Fast forward six years, Emily is a Paralympic Champion! We caught up with her post Games:

Firstly, how does it feel to be a Paralympic CHAMPION!?

It is crazy to think that I am now a Paralympic champion and know that my name will be in those results books forever! It was such a long process and a very long, extended preparation to get to Tokyo. The postponement meant that there were many extra challenges thrown in there, so to get the result in the Individual Pursuit (IP) was incredible. I’m so happy that I was able to perform well and do justice to the work of the team of people behind the scenes – it is fair reward for all the work that they’ve put in, especially the VIS staff (special mention to both Harry Brennan and Shane Kelly). These guys have given me so much of their time and energy over the last few years and deserve all the credit that comes with this result.

I have to say that if I didn’t have Harry Brennan on my team, I would not be in the sport today. I have had a lot of challenging moments over the past three years, and he has been instrumental in helping me navigate what has been and is a very challenging landscape. I couldn’t feel more grateful to have someone with not only such incredible intellect and knowledge in his specialised area, but someone that takes the time to understand those he works with and make sure that they feel seen and heard, working with them to maximise their potential.

How did you celebrate?

Celebrations in Tokyo were pretty limited given the COVID restrictions in place, and the fact I had the road Time Trial within six days of the IP. It was, however, lovely to come back to the hotel and show the medal to my teammates and the staff with us who have been a part of the journey. It was great to see and feel the genuine excitement of those around me for the result. I also got a chance to speak to Matt Ryan and Shane Kelly who, as I’ve always said, are the reason I am doing this. To get to share my excitement and deep gratitude to them both publicly and privately was incredibly special. These guys were instrumental in helping me rebuild my life when I started on the bike, and I will spend my life feeling grateful to them.

What was your best moment from the Games?

I had a few wonderful moments at the Games, and none more special than seeing Paige (Greco*) after my medal ceremony. We hadn’t seen one another since she left our little warm up room for her final, so it was so incredible to see her as soon as I walked off the podium and to get to share a hug, some tears, and really celebrate the fact we had both delivered on all the expectation that we had carried into the track competition.

What was it like competing in an empty velodrome?

Racing in an empty velodrome was obviously different from how I had imagined racing at the Paralympics to be, however, whether there are 10,000 people in the stands or none, my preparation for an event and how I approach it doesn’t change. I have done a lot of work with my sport psychologist, John Baranoff, to prepare for the Games and so I implemented those strategies to minimise any nerves and remained focused on getting the job done to the best of my ability.

With Tokyo behind us, I have started back at training and am looking forward to making big improvements on the bike in this cycle. I am still new to this sport really, and still very raw, so I know that there are a lot of improvements we can make to my performances, which is exciting. I am someone who is improvement focussed and always striving to be better than I am, so knowing I have the best possible team of experts around me from the start of the cycle brings great confidence and excitement about where we are going to go over the next three years as we head towards Paris. Track World Champs should be early next year, so it will be great to hopefully be able to travel to that to defend my three titles, and then to Road World Champs later in the year. The short Paralympic cycle is sure to be hectic and challenging, but I am looking forward to all of it – my team and I will be pushing the envelope, working to make me the best athlete I can possibly be.

While Emily still deals with the challenges of MS on a regular basis, she describes Para-cycling as her silver lining. The sport has afforded her the opportunity to become a multiple World Champion, World Record holder and, now, a Paralympic Champion. She hopes her story can give others with the disease belief that a lot can still be achieved.