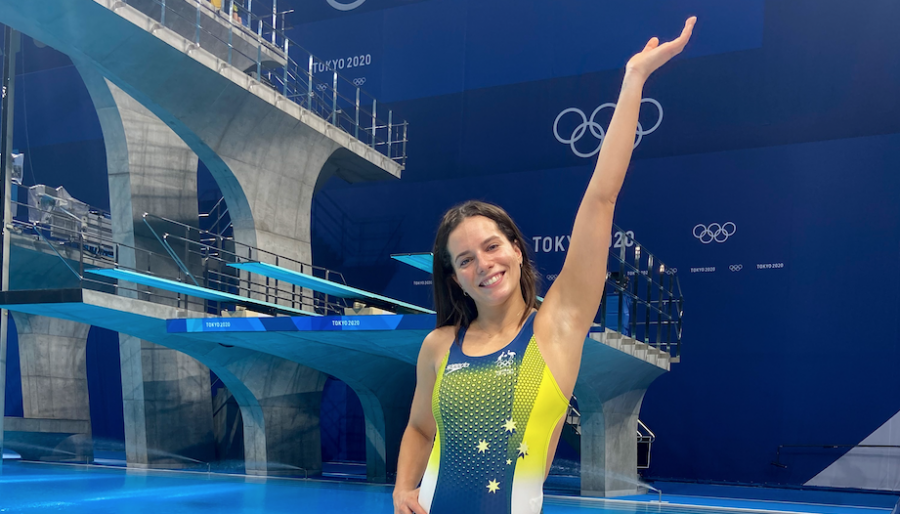 The pandemic put an end to Anabelle Smith’s hopes of winning another medal in the 3m Synchronised diving event in Tokyo. With the help of VIS sport psychologist, Caroline Anderson, Smith reframed her mindset with the end goal of representing Australia at a third Olympic Games.

Each Olympic diver gets five attempts to make their mark on the competition. With every dive lasting only two seconds, ten seconds is all it takes to determine your fate.

“In diving and especially at the Olympics, your mental game needs to be stronger than your physical game,” Smith says.

“If everyone has the same diving ability, the person who is going to win the competition is the one with the mental edge.”

Smith, a VIS scholarship holder for 13 years, spent several years searching for a sports psychologist that suited her needs. Smith met Anderson four years ago and they instantly formed a connection.

“From day one, Caroline made me feel safe and comfortable, and I knew after my first session, I’d found my fit,” says Smith.

“I feel like I have developed a greater layer of resilience and confidence in myself, thanks to the work we have done together.”

The last two years have been challenging for Smith, who has had to overcome many different obstacles to be able to represent her country for a third time at the Olympic Games.

At the end of 2019 she made the move from her home town, Melbourne, to Adelaide to be with her long-time coach and former VIS diving head coach, Andy Banks. The diving program was relocated in preparation for Tokyo.

Relocating is nothing new to Smith, who over the last eleven years, has had to move back and forth between Brisbane and Melbourne, to cater to training needs. However, due to the pandemic, this time, Smith was locked out of her home state and could not see her family for extended periods.

“It was an extremely turbulent time leading into the final qualifying event,” Smith says referring to the 2021 FINA Diving World Cup. ‘It was on, then it was off. We were going, then we weren’t. In the end, Diving Australia made the call that it was unsafe for us to go and the logistics proved too challenging.”

Smith and Maddison Keeney just missed out on the Tokyo automatic qualifying spots at the 2019 FINA World Championships in the 3m Synchro event. So when, COVID-19 prevented them from travelling to the World Cup to qualify the long way, their dream of winning another Olympic medal together was officially over.

When the Tokyo dream appeared to be over, Smith turned to Anderson for help mentally.

“Caroline was integral during lockdown, the postponement of the Games, and especially after losing our chance in Synchro. She helped me reframe my mindset and also gave me the grace to feel all my emotions when challenges arose, and to constantly work through what was going to come next,” says Smith.

Anderson helped Smith focus on the positive things in the tricky situation she was in. Instead of focusing on missing out on a competition she turned her attention to the fact she gained more time to train for a new opportunity, 3m Individual.

At the 2021 Australian Open Championships, Smith and Keeney were now battling each other for the elusive top two finish that would secure a spot on the Australian Olympic Team in the 3m individual event.

Smith used the skills on which she had worked with Anderson to help her perform at her best when she needed it. Breathing techniques helped her calm her nerves and stay present in the moment avoiding negative thoughts.

The trial was a close run between Smith, Keeney and Esther Qin. Smith proved her dive consistency and strong individual competition mindset and came second, only 3.55 points behind first placed Qin.

A great performance across the three lists of dives qualified her for the Team and she was going to a third Olympic Games.

In Tokyo, she proved herself as an individual diver, and given the circumstances, showed true resilience and grit in representing the green and gold.

Smith is happy with how her Tokyo campaign ended and her story leaves no doubt of the important role that sports psychologists play in the preparation of our athletes.

Equally important is how they support the athletes to live a balanced life and deal with the stress of everyday life and training.

“Many thought patterns or everyday issues that are unhelpful to bring into the pool, I talk to her  (Anderson) about,” Smith says.

“So, when I go to training, I can focus on my job and don’t get distracted by things outside of the pool.”

“At the end of the day I always say; if I’m happy outside of the pool, I’m happy inside of the pool. I want to make sure that I’m in the best mind frame to be able to train and really enjoy the process,” Smith says and continues,

“When you stand on that diving board at the Olympic Games, you want to stand there fully prepared and confident that you can get the job done.”