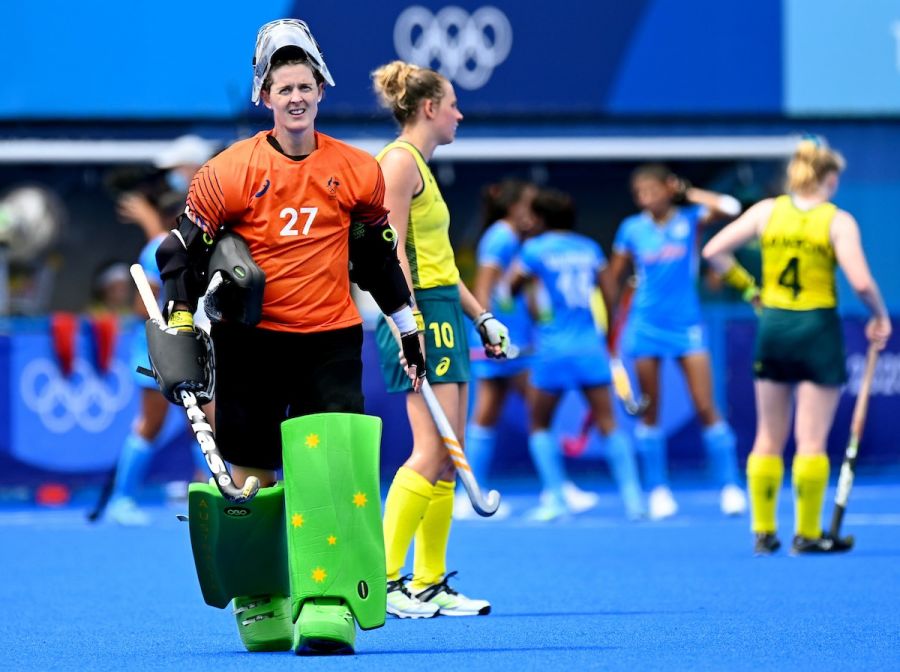 Five years’ worth of tears were shed at the Oi Hockey Stadium when the full-time whistle sounded, and for a group that had gone through the ringer in recent years the loss hurt - it really hurt.

India was not supposed to beat Australia. A team ranked ninth in the world and contesting only their third Olympic Games were not meant to oust the No.2 ranked team with four decades of Olympic experience.

But the 1-0 quarter-final was unlike perhaps any other, an upset to rival all women’s hockey upsets.

The Hockeyroos had won all five previous matches in Tokyo, conceding just a single goal, but were stunned by an Indian team that just made the semi-finals on skill and mettle and in doing so spoiled the Roos’ quest for an Olympic medal since 2000.

It was well documented that long-term Victorian Institute of Sport scholarship holder Rachael Lynch experienced some very dark days in the lead up to the Games. She was sensationally dropped from the squad, appealed the decision, worked on getting in career best shape and was ultimately rewarded with selection in the 16-woman squad for Tokyo.

The star Hockeyroo goalkeeper speaks to Pinnacle about her experience:

The 2020 Tokyo Olympics were unique and incredible.

Strict COVID protocols meant a long and slightly painful airport processing experience but once we were in the village, things were great. We were spoilt with bundles of uniform, comfortable rooms, a barista, Indigenous artwork everywhere and a collection of the most caring and athlete centered AOC staff you could ask for. From slushies and snacks to recovery boots, we were sorted and the Roos were ready to go!

We quickly got the lay of the land and made ourselves at home. Our COVID-safe rules and routines were in place which allowed us to focus on competing and enjoying the Olympic experience.

As the various athletes and teams rolled into the village, the excitement began to build. After 18+ months of uncertainties and set-backs, we were all so keen to get underway (before any outbreaks threatened to call off the whole thing).

As expected, the Tokyo heat was relentless, but we were all prepared. A week in Darwin pre-Games to acclimatise, and careful planning around individual strategies meant we had a psychological edge. We wanted hot days and high humidity as we knew we could handle it better than most.

My secret weapon for the hot and humid conditions - my trusty camelback backpack! A hydration solution I came up with whilst training alone in late 2020 when I was dropped from the squad.

It is almost impossible to keep hydration up during games which I knew would impact my decision-making and negatively affect my performance. I wore the 2 litre backpack filled with Powerade slushy under my goalie gear during games which allowed me to cool internally and stay hydrated and alert. Even with the halftime refill I still lost 1 to 2 kgs to sweat loss, which shows the importance of this method.

The day finally arrived for the opening ceremony where we watched from our balconies as athletes and staff from around the world gathered in traditional dress before making their way into the Olympic stadium. Cate Campbell and Patty Mills did us all proud as they carried the flag on behalf of Australia. We were all very happy to get dressed in our kit but then enjoy the ceremony via televisions in the village.

The vibe amongst the Hockeyroos was much like that of the whole Australian team; excited, united, focused and ready.

From day one to the conclusion, time just flew. We competed; we watched; we cheered; we ate; we laughed and we slept. A dream come true experience for any athlete.

I loved my roommates on this tour and boy did we have some fun! Our apartment was set up like a home. We had a projector (delivered via Japan Amazon) that streamed sport from 7am till late at night, a pantry made out of cardboard boxes filled with meals and snacks, a makeshift linen store for all towels and bedding (we didn’t allow cleaners in our room due to the COVID risk), a mini basketball ring for shoot-out competitions, a polaroid photo wall and little pieces of home next to our beds.

Normality can be hard to create at an Olympics so some creature comforts made the world of difference.

The Games; at Tokyo 2020 the Roos created some history. We won five games in a row (all pool rounds) which had never been done before. I set a record for going the longest without conceding a goal (one in five pool games then one in the quarter-final where we bowed out) and then to top it off I was presented with an award by World Olympian’s Association patron Prince Albert II of Monaco for ‘Olympian for Life’. It was given to 5 athletes globally for their contribution to society and use of their platforms to improve people’s lives. A truly incredible honour!

The most special part of this experience however was the poem and presentation made by my teammates Rosie Malone and Sav Fitzpatrick. Some beautiful and powerful words shared in a moment I'll never forget. Surrounded by my teammates and staff, with the AOC looking on and filming, so I could keep this memory forever.

Final’s time came around and we knew we were at the business end of the tournament. Five out of five wins put us in a fantastic position going into the quarter-finals, but none of it meant a thing as this was a knockout game.

Across the tournament I had chosen to read a few letters from home before each game. Our Well-being and Engagement Manager Rohan had organised an envelope for each of us filled with letters and cards from friends and family back home. A very special gift! Each one gave an emotional boost and a nice reminder of those who had contributed to this journey.

The night before the quarter-final I felt a little nervous so chose not to read any. I knew the incredible support I had around me and wanted to keep my emotions in check for the big game.

The quarter final came and went and with it, the end to our fairytale journey, I deeply wanted this to be our time, our year. After everything I’d been through and the team had been through, a gold medal (or any medal in fact) would’ve been the icing on the cake.

One goal is all it took. Our Olympics was over. We sat in silence in the change room. Some cried, others just stared at the floor. It’s a tough pill to swallow when every ounce of you goes into preparing for an Olympic Games. Our coach told us she was proud. She thanked us for the incredible experience and emphasised that we had not let anyone down.

I took some time to reflect then was requested for an interview with waiting media. Through tears I spoke of how proud I was of the group, how united we had become, and of the courage and leadership shown by some of the girls during my dark times. I knew it was obvious to those back home but I shared how we had laughed and how much fun we had had together. How the girls played so freely and without fear. This was what hockey should be about.

As a group of aspiring women, we aimed to create something really special. Something that young girls wanted to be a part of. And we had done that!