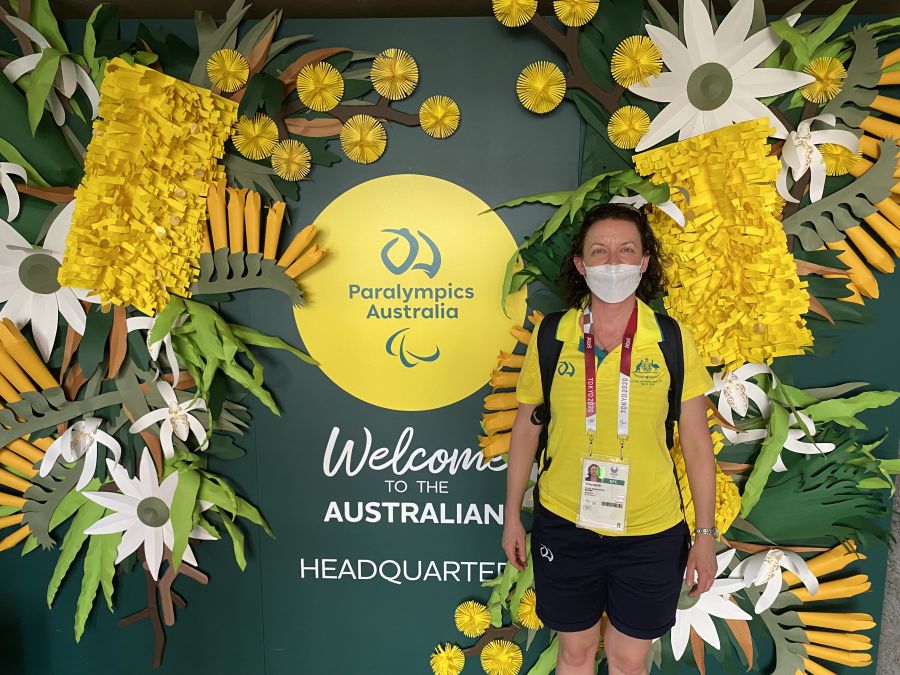 ​When long-time VIS remedial massage therapist, Gillian Niven, travelled to Tokyo she thought she would travel home with everyone else after the closing ceremony. However, Niven’s Paralympic assignment didn’t end there as an unfortunate crash for a VIS Paralympian extended her stay, but filled it with long-lasting memories.

Gillian Niven has been part of the VIS for over a decade and has worked at multiple major international sporting events. Including two Paralympic Games, the Commonwealth Games and several Track Cycling World Cups and Championships.

It’s safe to say that this one ended up being like nothing she had ever experienced before.

Niven was appointed to the Tokyo Paralympics Team as a soft tissue therapist in the Australian headquarters. She worked with sports such as table tennis, goalball, taekwondo, wheelchair basketball, archery, rowing, triathlon and wheelchair rugby.

“I got to understand a couple of sports much more too, namely goalball and boccia. On two separate occasions I had the opportunity to go and watch goalball and rowing. This was fantastic to be able to cheer on our athletes” Niven says.

A first for the Australian Paralympics Team was getting all the athletes’ meals catered in, to avoid going to the dining hall. This was a mammoth task and the performance services team all pitched in.

“We would help with stocking fridges, handing out meals, making wraps/smoothies, washing up and drinking coffee,” Niven says. “So often if I wasn’t busy massaging, I’d be in the tuckshop (kitchen area) assisting with whatever was needed. “

Niven stayed in a hotel just outside of the athlete village together with some of the other support staff.

“In the mornings for breakfast and at the end of the day we would meet different staff and chat about the day,” Niven says. “It was great to get to know other people doing different jobs”.

One of Niven’s favourite moments from Tokyo was the opening and closing ceremonies where the whole Australian team came together in the athlete village.

“The atmosphere we created as a group was incredible and it reminded me what we can do when we come together,” Niven says. “There was so much support and admiration when athletes returned to the village from competing, whether they had won a medal or not.”

As the Paralympic Games were coming to an end, Niven thought she would be heading home, until VIS Para-cyclist Carol Cooke crashed heavily on her bike and had to go to hospital with a punctured lung.

“The call was put out to our performance services team to ask if anyone would be able to stay with her,” Niven says.

“I put my hand up, as I knew I wasn’t able to work back home, so wouldn’t be letting anyone down, and I didn’t have to rush back to a young family, as some of my colleagues needed to.”

Niven was also keen to stay on in Tokyo and assist a fellow VIS family member.

“We stayed at a hotel not far from the Australian embassy and right next to Tokyo Tower, which lights up beautifully at night and looks like the Eiffel Tower,” Niven says.

Niven didn’t know Cooke that well but within a few days they were getting along famously and enjoying all that Tokyo had to offer.

“We found a couple of local French bakeries for breakfast, would do short walks, went to the gym at the embassy, met the Australian ambassador one night at a BBQ,” Niven fondly recalls.

“We had a couple of sightseeing day trips with a great person from the embassy and generally had a super time, whilst Carol recovered”.

The Tokyo companions even ended up spending 14-days of hotel quarantine together in Melbourne in two rooms adjacent to each other with a door connecting them.

“I am full of respect and admiration for Carol, she has handled so much in her life and remains so positive plus encourages others,” Niven says. “I’ve been so fortunate to have been ‘stuck’ with her!”.

“My life has been enriched through this experience of the last 6 weeks and I can only hope to go to Paris 2024”.