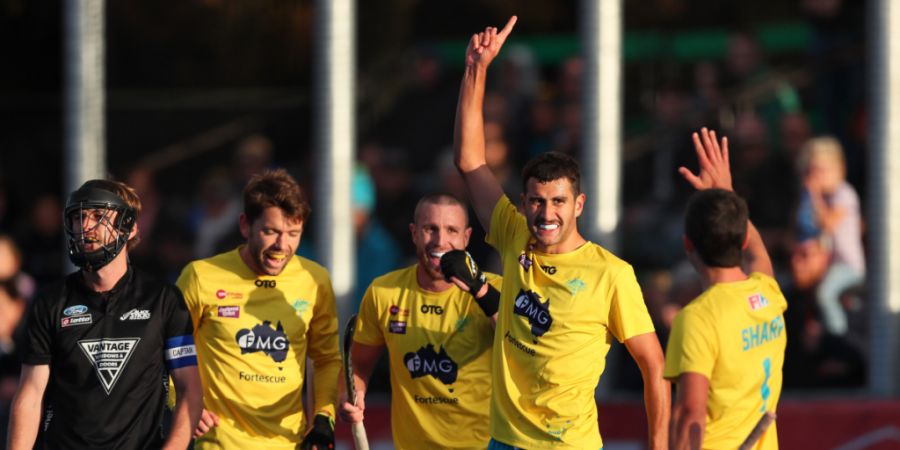 The Kookaburras have an unassailable lead in the Trans-Tasman Series after winning the third match 4-2 against New Zealand.

After convincing victories in the opening two games, the Kookaburras made a fast start in front of a packed house in Palmerston North, going 2-0 up inside eight minutes.

Six minutes into the third quarter young Victorian Nathan Ephraums scored his second Kookaburras goal and his second of the series with a classy behind the back deflection after Jeremy Hayward drilled a ball in after a penalty corner injection.

The fourth and final game of the series is on Tuesday.

The Hockeyroos and New Zealand still cannot be separated after Match 3 of the Trans-Tasman Series finished 2-2 to make it a third straight draw between the teams.

Rachael Lynch, who replaced Wells at half time, kept out Merry’s low drive but Ella Gunson was the first to react from the rebound and knocked the ball into the backboard to make it 2-1 to the hosts.

The Hockeyroos upped the tempo in the last quarter but their cause was not helped when Mariah Williams received a yellow card leaving the Australians with one player less for five minutes.

Lynch palmed away a Hope Ralph shot as the Blacksticks looked to land the killer blow with three minutes left.

But the Hockeyroos again showed grit to equalise late on. Captain for the day Brooke Peris opened up the field with a quality turn allowing Renee Taylor to unload a powerful shot.

O’Hanlon parried it away but Malone was alert to it and showed great desperation to sharply knock the ball home.

Both teams now have it all to play for in the final match of the series on Tuesday.

After a swift change of plans mid-week as Melbourne went into lockdown, and an injury ruling out Emily Mannix the night before the game, an incredible debut - including the winning goal after the siren - from goaler Rahni Samason has helped the Melbourne Vixens take out their first win of the season in a thrilling finish, in the same arena they won their last match, the 2020 grand final.

If you’d picked this starting seven five weeks ago, you would not have been believed - a fresh debutant, a recent debutant, no sign of Liz Watson or Emily Mannix and Kumwenda in GA. It was a test for the Vixens, and a win needed to lift the spirit of the team and fans at home.

The game started off tight and goal-for-goal early, however the pressure of the Firebirds forced the Vixens backwards and to trail by eight at the first break. Something clicked for the travelling team who used the Super Shot to their advantage, and clawed back to a 2-goal difference at half time.

The Super Shot again helped the Vixens surge in the third quarter, taking the lead late. A thrilling final quarter had the crowd on their feet, but a goal after the siren silenced them as Samason shot her eighth and final Super Shot.

You could see the relief head coach Simone McKinnis as the camera shot straight to her after the match-winning goal.

Australia’s Women’s 3x3 Basketball team suffered a heartbreaking loss to Spain in the quarterfinals of the FIBA 3x3 Olympic Qualifying Tournament in Graz, Austria, over the weekend. Despite being in strong form throughout the season, Australia’s 14-12 loss means that they have been knocked out of contention for a place in the Tokyo field.

The top three ranking teams from the event were awarded qualification for the Tokyo 2020 Olympic Games commencing next month, with those places granted to the Women’s Teams from the USA, France and Japan.