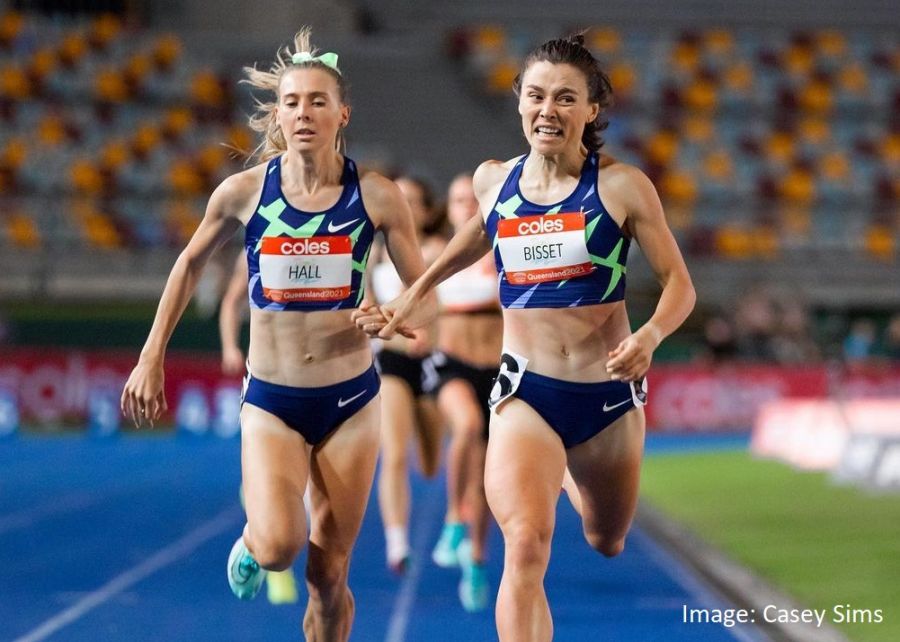 In VIS sport, Linden Hall and Cat Bisset both recorded Olympic 800m qualifying times, the VIS rowers and cyclists dominated national championships and Penny Smith proved that she is on track for Tokyo.

Perhaps one of the most exciting races of the night was the women’s 800m, with Australian record holder Catriona Bisset (VIC, Peter Fortune) and 1500m specialist Linden Hall (VIC) going head-to-head. Friendly foes on the track, it was Bisset who won the event, clocking 1:59.12, with Hall only a tenth of a second behind.

It was only the third time in Australian history that two athletes have run under 2 minutes in the women’s 800m, with Tamsyn Lewis-Manou and Madeleine Pape both breaking through the barrier at the 2008 Sydney Track Classic, and Lewis-Manou again with Margaret Crowley in the lead up to the Sydney Olympic Games.

Commenting on her second Olympic qualifier and the quality of the race, Bisset said:

“My first qualifier was almost two years ago so it’s really nice to be racing that tempo again and be back in that sort of shape. I was going for a PB tonight but within half a second is close enough.

“I know that if I want to make an Olympic final, you’ve got to be able to run 1:59, and get through the rounds, so this was great training to time trial this one and see how far I can go.

The history books were rewritten on the opening night firstly through the Victorian under 19 women’s team pursuit outfit smashing the clock with a time of 4mins 32.984secs. The victorious performance of Alyssa Polites, Sophie Marr, Lucinda Stewart and Hayley Jenkins was nearly four seconds better than the previous record (4:36.792) set by the Australian Junior Team in 2011.

The following day rising star Alessia McCaig continued her undefeated run at the Championships by winning the U19 women’s keirin final.

It was a day to remember for McCaig, who had earlier in the day broke her own national 500m time trial record on the way to winning gold in the U19 500m time trial final. The Victorian Institute of Sport scholarship holder stopped the clock at 34.354secs, which is just under half a second quicker than her winning time at the 2020 Championships last December.

Plowright, an Australian Cycling Team Podium Potential Academy member, hit the ground running from the get-go in the four-race omnium with a second place in the scratch race early in the day. The win gave Plowright a second gold for the Championships after he guided Victoria to team pursuit gold on the opening day.

“Good Friday night. I had really good legs today. I tried to save them throughout the first three races, and in that last one, it was close. Liam is a great rider, and he’s shown that in previous events … so I had to step up and try to take those sprints which he’s quite good at.” He said.

Meanwhile, McCaig went on to win a third goal medal from three events, but this time breaking her own national record. Crossing the line in a time of 11.187secs, winning every match sprint to win emphatically.

In the other U19 medal events, 2021 junior criterium champion Lucinda Stewart added another green and gold jersey to her locker.

On the fourth day is was Graeme Frislie that triumphed in a chaotic elite men's scratch race. Frislie emerged unscathed and first across the line in a ferocious scratch race that had the crowd on the edge of its seat.

A rapid chase led by eventual silver medallist Oliver Bleddyn reeled Duffy back in on the final passing of the back straight, leading to a moment of chaos which ended with Frislie crossing the line for the national title and Blake Agnoletto, Declan Trezise and Jensen Plowright laying on the Anna Meares Velodrome boards. All three riders were thankfully unscathed from major injuries in the incident.

“It was action right from the gun with attacks going … and everyone was really on the limit at the end. Duffy had a big move there with five laps to go and almost stayed away, and unfortunately, there was a bit of a fall there at the end, but I’m pretty happy that I managed to get through it and come away with the win.” Frislie said.

Less than 24 hours after slamming into the Anna Meares Velodrome boards in a brutal crash, Jensen Plowright bounced back and was back to his brilliant best.

Plowright was a man on a mission throughout the 160-lap epic of the elite men’s points race, which was a battle of attrition that saw only nine riders finish.

A solo surge from Plowright with 48 laps to go laid the platform for his win, and despite a late desperate all-in effort from Queensland’s James Moriarty, the Victorian remained in control of proceedings.

The victory was Plowright’s third national title for the Championships after earlier successes in the team pursuit and omnium.

McCaig then stepped up to the elite ranks with Hayley Jenkins to join Caitlin Ward for Victoria in the women's sprint. The trio did not miss a beat, winning the gold medal final versus Queensland and securing McCaig's fourth goal medal of the championships.

A national record accompanied the Victorians’ win as it was the first-ever women’s team sprint contested in the new three-rider format recently introduced by the UCI (49.849secs)

The National and Interstate Rowing Championships concluded yesterday at Lake Barrington in Tasmania. The enjoyment from everybody competing away from home, many for the first time in a long while, was evident.

It was an opportunity for the VIS National Training Centre athletes to compete under the VIS banner and for their State in the Interstate events. With wins in the Queens and Kings Cup everyone had a win at the Interstate event, and many were medallists throughout the National Championships.

Victoria very narrowly lost the Australia Cup to NSW despite a brave effort to regain this ascendancy.

The Victorian Institute of Sport Daily Training Environment pathway athletes had a share of the spoils as well with the major results listed below.

During the week of the National Championships Gold Medals were won by:

A large number of silver and bronze medals were also won helping to ensure Victorian athletes progress positively towards the Olympic and Paralympic Games and for Under age selection that continues this week at Lake Barrington.

In perfect conditions, Montag (Brent Vallance) recorded the fastest time on home soil by an Australian when she crossed the line in 1:28.50, ahead of Katie Hayward (QLD, Steve Langley) and Rebecca Henderson (VIC, Simon Baker) who placed second and third respectively.

Montag’s performance was a personal best by two minutes, and sets the tone for her Olympic debut in Tokyo later this year.

“It’s really exciting to take this win,” she said.

“I knew this would be the fast hit out for the season because Tokyo will be humid and will probably come down to tactics, but I’ve waited over a year to do a 20km race and I’m so happy to make the most out of today,” Montag said.

In the men’s race, it was a battle between eventual winner and race walking veteran Cowley, who clocked 1:22.28, and up and comer Declan Tingay (WA, Steve Tingay).

In an attempt to stamp his authority on Australian race walking, it was Tingay who crossed 0.01 seconds ahead of Cowley, but the win was not to be. Tingay received a two-minute time deduction following a third red card on his final lap of Fawkner Park, and placed behind Kyle Swan (VIC, Brent Vallance) who won silver. Cowley, who has already notched up a qualifier for the Tokyo 50km event, was still happy to take home his first national 20km title in his lengthy career.

“It was definitely an odd way to finish, but I’ve been trying to win the National 20km Championship for over a decade so I’ll take it in whatever way I can get in that respect,” he said.

“Before the pandemic, I clocked an automatic standard for Tokyo so there was less pressure on me to get the qualifying time today, but I was trying to keep Declan company and push a fast time out of him too and I’m really happy with my time over 20km too.”

Victoria’s Penny Smith demonstrated she will be a major force in the women’s Trap at the Tokyo Olympic Games in July after an outstanding gold medal winning performance at the Yarra Valley Grand Prix today.

Smith, who topped the Olympic nomination trials last year, held a slender one target lead going into the final 10 targets and was faultless with her final 10 shots to close the door on any late fightback from Scanlan.

It was Smith’s second gold medal of the weekend when she combined with fellow Tokyo Olympic Games team-mate Thomas Grice, to win the mixed Trap Pairs last Friday.

Qualifying second for the final behind Willett, Iles downed 43 of 50 targets in the final to overcome Grice (41/50) with Willett earning the bronze (32/40).

Iles, who represented Australia at the 2016 Rio Olympic Games, narrowly missed earning one of two men’s Trap quotas for the Tokyo Games during the Olympic Games nomination events last year.

Aoife Coughlan was back on the Judo world stage, this time placing 7th at the Tbilisi Grand Slam in Georgia.