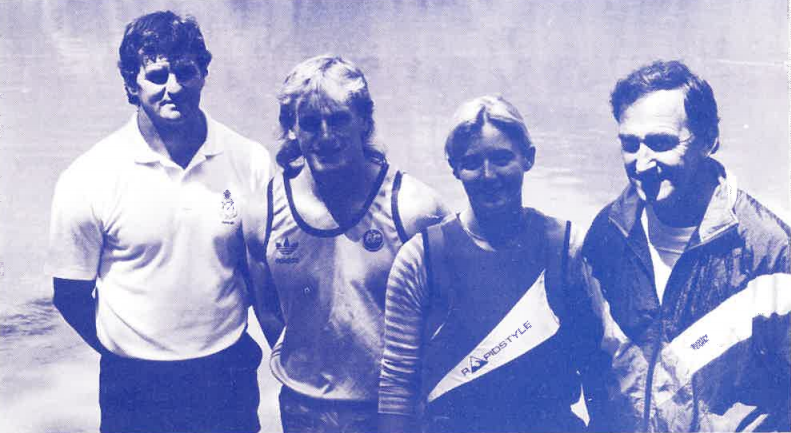 “The Pinnacle” or now known as “Pinnacle Magazine” was first distributed in 1990, the same year the Victorian Institute of Sport was established.

"The Pinnacle" was initially produced as a resource to provide VIS updates as well as act as a forum for new information that was a value to coaches and athletes at all levels of sport. The publication was given it's title, due to the VIS centring talented athletes who are indeed at the pinnacle of their sport in the state and in many cases the world.

Below is the second issue of "The Pinnacle" distributed in December, 1990.

The Victorian Institute of Sport has stated in its objectives, that it is committed to ensuring the total development of all its athletes. This therefore means sports medicine, advanced coaching, sports science and competitive opportunities, will be available. These services together with career and education support will result in a well-balanced athlete who is hopefully able to take charge of their present and future lives.

It wasn’t until recently that many of those in the sporting realm saw the need to consider career and education issues. However, the athletes themselves have always tried to juggle both. Some have great difficulty in doing this, while others have to retire before their personal aspirations are met. For many it means constant sacrifice of potential education / career opportunities in the search for sporting success.

Is it possible for athlete to focus on elite performance and still develop their education and career prospects? The VIS believes a multi-lateral approach can be achieved, with the right resources and support. As a result, they have recently appointed Career Development Co-Ordinator, to work closely with the athletes on their long-term education and career objectives.

Dr Deidre Anderson joined the VIS in mid-October and brings with her an empathetic approach to dealing with athletes. Deidre believes that elite athletes generally make exceptionally good use of their time, because basically they have to fit a lot into their day. This skill which many athletes possess, can enable them to assess where their education and career objectives lie. “If athletes set clear achievable and realistic goals, they can commit themselves to not only their sport but also their education and career”.

Deidre will be meeting with all VIS athletes on an individual as well as a group basis and despite the fact many athletes may not see life outside sport as an immediate issue, she is convinced that a holistic approach to life will help improve an athlete’s present and future potential.

“Our elite athletes are dedicated and with the VIS programs, I feel confident that Victoria can look forward to an even more successful breed of well-balanced sports people.”

There has been much discussion on the various challenges that face our elite athletes. The following article was written by 16-year-old Mia Farrance who has already developed strong views of her own. Mia is involved in canoe, spring and dragon boat racing and this year was awarded with a scholarship with the VIS. – 1990

My personal definition of an elite athlete can be best described as a person who competes internationally. Elite athletes need many qualities. I believe the most basic one is that of heredity. An elite athlete must have the genes. Once born and armed with a basic talent the athlete needs much more to become among the top of their chosen sport. Other qualities that are required in the person include:

(a) Drive. The athlete must be driven, not by a parent or coach, not by the lure of big prices and fame, but simply and basically by self-drive. The desire to be the best that they can possibly be, the desire to push that little bit more, and to be just that much better.

(b) Train. An elite athlete never just goes through the motions whilst training. It’s about always striving for the best. They must train in all conditions, cold, hot, night and day. Most importantly they must be honest and totally dedicated.

(c) Sacrifices. An elite athlete’s biggest sacrifice is time. Time becomes cherished acquisition. There is never time to relax, read, have fun, go out visit friends, try new activities, or just do nothing. Work, train, eat, sleep is the routine.

(d) Single Mindedness. An elite athlete has to concentrate on one objective, to be the best at their sport. Everything else becomes of secondary importance – friends, work and education. This ability to focus on one thing can also have benefits in dealing with exams and work situations.

An Australian athlete needs even more time than other athletes around the world, because they often are required to compete out of season. It means competing in local/state competitions, usually in summer, then in the off season (usually winter) when other athletes go to rest. The Australian athlete competes at world level in the middle of our winter. It makes training very difficult for athletes and coaches alike.

Travelling – Nobody suffers as much jetlag as Australian athletes. Strange food, strange customs, and a totally different environment. Any Australian doing well on the international scene has really earned their place.

Training – A normal training regime for an elite athlete will include 10-12 sessions a week varying from 1-2 hours each. This can of course vary from sport to sport. Most athletes fit routine looks something like this: Five sessions every night after school; Three morning sessions before school; Two or three sessions on a Saturday; Possible competition on Sunday. Added to this could be general fitness work, for example, cycling, running or swimming.

Weight Training – At the international level all athletes need to do some form of weight training. Usually, one to three sessions per week.

Why Bother – All this sounds very harsh and difficult, why then do athletes keep training so hard for so many years? Although one’s social life is severely curtailed, they still make many friends, many of whom are international. Travelling overseas can also be a wonderful experience, although you don’t really get much time to see the sights. There are opportunities to meet people, develop careers prospects which may not otherwise occur.

The ability to give 100% in sport encourages athletes to stand up for what they believe in.

The opportunity to achieve a goal is the most rewarding experience a person can have. It may not always mean a gold medal. It may, however mean a personal best.

Mia Farrance went onto make the 1996 Australian Olympic Team that went to Atlanta. She made the final of the women’s Kayak and placed 14th.

Originally from Albury on the banks of the Murray River, Martin Hunter was introduced to canoeing through his energetic parents. He has since spent many years at the forefront of this international sport. Martin had a successful junior national career and launched his senior international debut with a world ranking of ninth.

While Hunter was identified as a prospective talent back in 1979, it has taken him until now to show his worth through steady and measured progress.

1989 Plovdiv – Bulgaria. For romantics, a stopping place for the old ‘Orient Express’ as it puffed its way to its final destination across Europe. For Australian canoeists it was the first time our new national anthem had been played at a Sprint World Championship – in fact it was the first time ever and it was in Martin Hunter’s honour as a result of his winning the fastest 500 metre event in the history of the sport.

1990 Poznan – Poland. Martin stamped his world class with a fighting third place and under the circumstances it was every bit as good a performance as 1989.

Martin works as a maths tutor and every young man’s dream as a storeman in a chocolate factory.

Hunter does nothing special or secret in his preparations; 6.30 a.m. Monday to Saturday, sees him either in the gymnasium or on the water and going fast.

At 25 years of age, Martin Hunter is superbly placed at this time and on target for outstanding performances at Barcelona. It is a goal not easily obtained but if you were a betting person you could put a quite dollar on Martin Hunter.

Martin acknowledges his competitors in a positive light, but he is aiming for Australia’s first gold medal in canoeing.

Martin Hunter went onto represent Australia at an Olympic Games for the second time at Barcelona in 1992. He placed fourth in his heat, and just missed out on qualifying for a  semi-final placing fourth in the repechages.