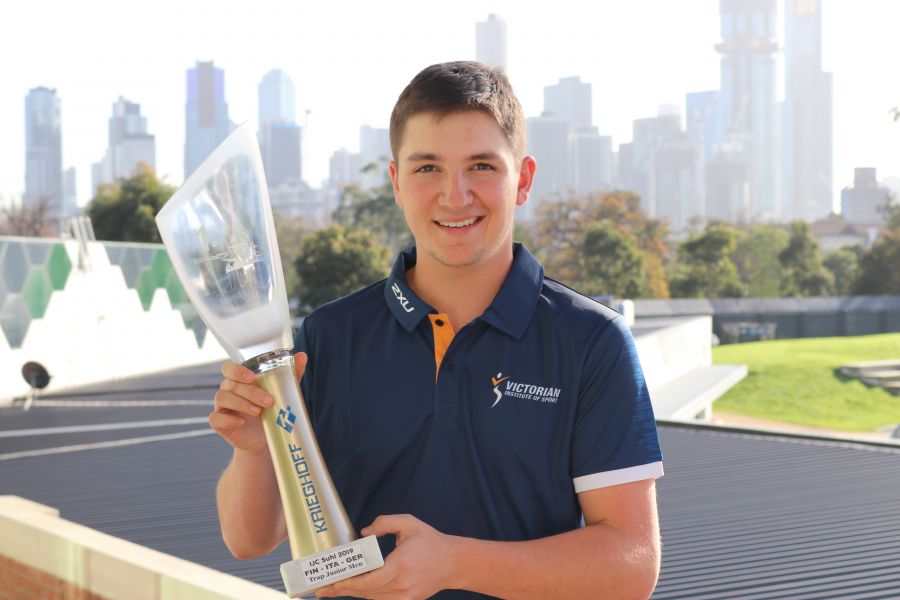 Mitch Iles has been firing a shotgun for as long as he can remember.

As a young boy, and under the close eye of his grandfather Bill Iles, widely regarded as a legend in the Australian Clay Target community, young Mitch was taught the basics when shooting on private property on the outskirts of Melbourne.

The smell of gunpowder saw Iles accompany his grandfather to the local gun club on weekends where he would watch and learn.

“I grew up going to the gun club watching him (Bill Iles) compete. It’s been normal for me to go to the gun club ever since I can remember. He’s taught me everything to do with shooting,” said Iles.

Their relationship is more than just grandson and grandfather.

They are mates, confidants, and travel buddies as they tour the highways from event to event. They would do that just about every weekend – at least before COVID-19 struck and Club ranges were closed.

To this day, Bill Iles takes the 30 minute drive from his home in Hurstbridge to Melbourne Gun Club, located in the Yarra Valley at Yering, every Wednesday and Friday to coach Mitch.

Decades of wise shooting knowledge have been passed on to his 21-year old protégé like granules of sand which have developed into priceless pearls over time.

Knowledge is one thing, but talent is another. Young Mitch always had an advantage – his grandfathers’ genes.

In 2012, Iles sat in front of the television riding every shot as Michael Diamond chased a third Olympic Games men’s Trap gold medal at the London Olympics. Sadly, the gold medal eluded Diamond in the final after equalling the world record with a perfect score of 125/125 in qualifying.

“I remember watching Michael in the final. I was supporting him all the way,” said Iles.

“At that time, I actually had never met Michael. My grandfather and him shot off against one another quite a few times during my grandfather’s career,” he added.

Despite the disappointment of Diamond missing a medal at the London Games, Iles’ own Olympic ambition was ignited.

Iles was a quick learner and, by his own admission, “came out of the blocks pretty quick”. But despite his emerging talent, Bill Iles wanted Mitch to prove himself in Down The Line events before competing in Olympic ISSF Trap events.

“My grandfather said you can start shooting (ISSF) trench once you learn how to win in Down The Line (DTL) and you can consistently walk out and say to yourself ‘I can win this event’, and then win it,” Iles recalled.

In 2014, having just turned 15 years of age, Iles won the Australian Open DTL title and attended the Universal Trench World Championship in Lonato, Italy, before contesting the Helice ZZ Championship in nearby Bologna, where he came away with the gold medal. Bill Iles and Colin Kneebone were his fellow Australian team members.

“That’s where my career as a shooter really opened up. I got opportunities with gun sponsors like Perazzi,” said Iles.

Bill Iles was as good as his word and Mitch’s first ISSF men’s Trap event was the Youth Nationals in December 2014 at the Sydney International Shooting Centre.

In 2015, Iles met and competed against Diamond at the National Titles in Newcastle and, months later, they were members of the Australian team competing at the World Championships in Lonato where Iles contested the Junior World Cup where he reached the final and was placed fifth.

By age 17, Iles was an Olympian representing Australia at the 2016 Rio Olympic Games when replacing Diamond in the team after he was ruled ineligible when charged with drink-driving and firearms offences which saw him stripped of his gun licence. Diamond was later acquitted of the firearms charges 17 months later.

The Victorian Institute of Sport scholarship athlete described the Rio Olympics as a “surreal” experience.

“You see it all on the TV as a little kid, but when you are actually there, you are right in the thick of it. To see all those athletes, you never expect to meet – Usain Bolt and all those sort of guys - seeing them in the flesh and knowing you are part of it is a pretty cool thing,” he said.

The Rio Olympics was only the second time Iles had competed in the open men’s Trap ranks at an international level despite having regularly competed against men in events in Australia.

“I didn’t shoot (in Rio) anywhere near as I’d like to. It was as good a learning curve as any and probably the best that I’ve ever had,” he said.

After the Games, Iles packed away any disappointment and headed to Morocco for the 2016 Universal Trench World Championships where he won the gold medal shooting a world record score.

“I used my bad performance at the Olympics as the drive for that event to prove to myself that I can be good enough,” he said.

Two years later, Commonwealth Games honours were gained on the Gold Coast where he finished fifth in the men’s Trap final after qualifying fourth.

And he proved himself again in 2019 when he and Penny Smith equalled the Open Mixed Trap Pairs world record hitting 149/150 targets before winning the 2019 Junior World Cup Trap silver medal in Moscow when runner-up to Lorenzo Ferrari of Italy.

It was at this event where the advice of his grandfather proved instrumental to him qualifying for the final after shooting an opening round of 22/25.

“I rang my grandfather who was back home after the first round and explained to him what was happening. He suggested to me that it sounds like I was shooting underneath the target and my gun is set up a bit low. So, I lifted my stock up so it would shoot a little bit higher. I then shot 98 from the next 100 and was pretty happy to walk away with a medal,” said Iles.

While Iles would love to be attending the Tokyo Olympics this year, he will be watching on TV after missing selection after the four-part Olympic nomination series 12 months ago.

With 2016 Olympian James Willett comfortably winning the series to grab one of two men’s Trap quota places, the remaining position boiled down to a two-man battle between Iles and Thomas Grice, with Grice gaining Olympic team selection based on Shooting Australia’s selection criteria.

While disappointed in missing Olympic selection for Tokyo, Iles remains focused and upbeat.

Last month he was named in the National Squad and, in November, he will be aiming to successfully defend the Oceania Championship Trap title he won in 2019. He is also looking to win selection in the Australian team for the Commonwealth Shooting and Archery Championships scheduled for India next January.

“For me, missing out on this Olympic team has probably given me more drive than I ever had in my career. It is more fuel for me going forward,” he said.

With age on his side and Bill Iles in his corner, future international success and more Australian Olympic blazers are well within Mitch’s reach.