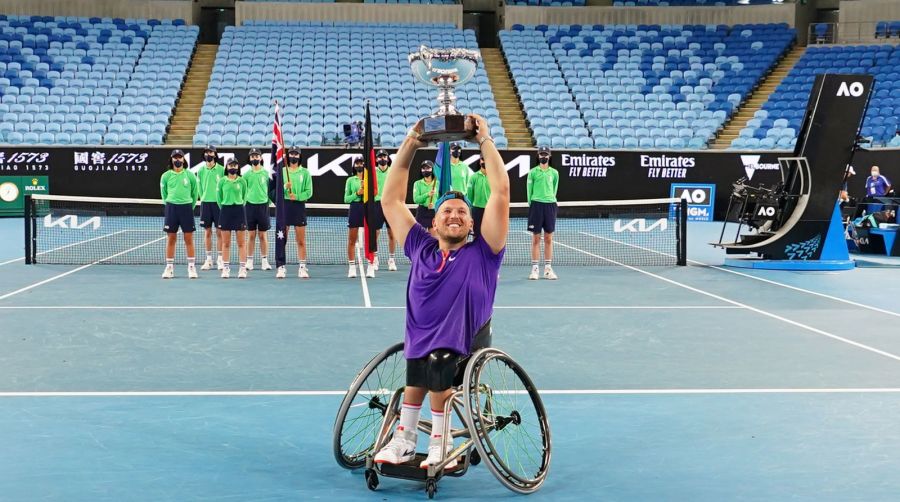 The 30-year-old has done it 20 times now – twice this week in Melbourne.

A seventh straight Australian Open quad wheelchair singles title – the day after he’d claimed a fourth Australian Open doubles title with Heath Davidson – is the latest in a long line of history-making achievements for the world No.1 from Melbourne.

Alcott’s 6-1 6-0 victory over Sam Schroder made him the first wheelchair player, in any division, to win seven straight singles titles at any one Grand Slam tournament.

It was his 12th major singles title, Alcott also a winner of eight titles at that level in doubles.

Originally scheduled to be played on Rod Laver Arena, the final was moved to Margaret Court Arena as the men’s singles quarterfinal between Rafael Nadal and Stefanos Tsitsipas extended to a fifth set.

Taking to the court at 11.20pm, Alcott wasted no time in asserting authority over his Dutch opponent.

The Australian quickly recovered from dropping serve in the opening game, his comprehensive first set lead secured in just 25 minutes.

After a heartbreaking loss to the world No.3 in the 2020 US Open final – his only loss in 20 matches contested last season – Alcott wasn’t allowing Schroder any hint of an opportunity on this occasion.

With Schroder serving, the opening game of the second set extended to four deuces; Alcott maintained his momentum when he seized that game on his fourth break point.

Three games later, Alcott underlined his competitive intensity as he recovered from a 0-40 deficit on his own serve. Breakpoints told a powerful story, the Australian winning six of 17 and Schroder converting just one of the six opportunities he created.

Alcott closed out the 63-minute match with 30 winners to 11 from Schroder, recording only 11 unforced errors.

Also a winner over Heath Davidson and Niels Vink in earlier singles matches this week in Melbourne, Alcott has in fact lost only three matches since his Australian Open 2014 debut.

He fell to David Wagner and Lucas Sithole in the round-robin stage in 2014, and to Wagner at the same stage of the 2018 tournament.