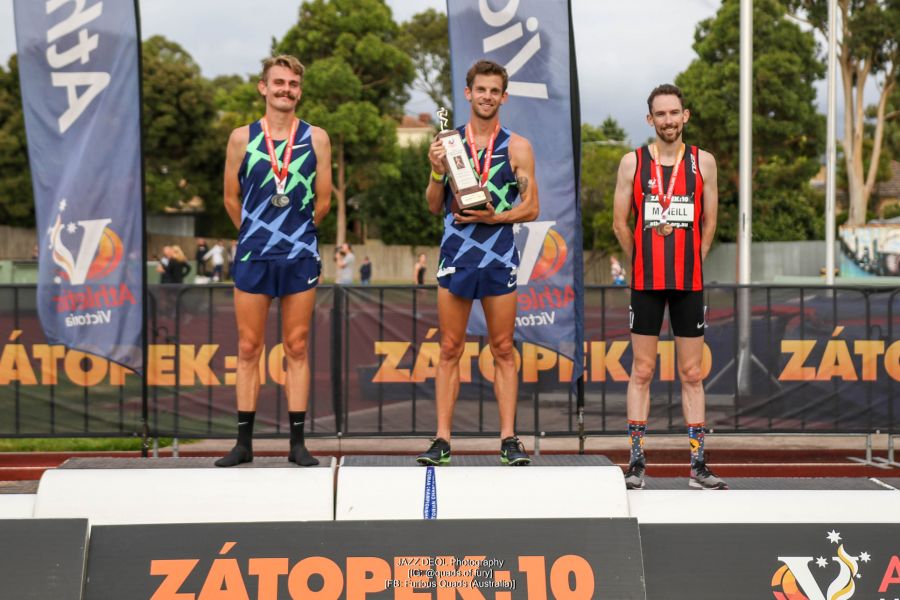 Seven years after winning his first Zatopek:10 VIS scholarship holder Brett Robinson (Nic BIdeau) was crowned the Australian Men’s 10,000m national champion for 2020 after taking out the title in a time of 28:00.25, ahead of fellow scholarship holder Jack Rayner (Nic Bideau) in second place (28:13.42).

With the Melbourne Track Club trio the resounding podium favourites leading into the event, they had company in the form of Sam McEntee and Ed Goddard through 5000m in 14:00.

But a 2:43 split for the sixth kilometre from Robinson soon dismantled the field - opening up a large gap on his teammate Rayner, who had also managed to sneak away from the remainder of the initial lead pack.

Over the last 10 laps of the 25 lap journey things went unchanged, with Rayner unable to make any inroads into Robinson’s lead.

“I think I’ve still got times over the 5k and 10k where I can run fast, so I’ll be there so the boys better be ready,” he said.

“I know those boys I’m racing against are all running well and are going to run well this year so it gives me a lot of confidence.”

Robinson plans to “get some speed back in the legs” over 5000m before returning to marathon training when there’s clarity regarding events.

Meanwhile, A scorching last lap from VIS athlete Linden Hall in the women’s 1500m saw her take an emphatic victory at Box Hill, narrowly missing the Olympic standard of 4:04.20 when running 4:04.33.

“I’m just trying to take advantage of the race opportunities and set them up as best we can, I was so lucky to have Catriona help me out after her 800.”

Hall has her eyes set on breaking the four minute barrier for 1500m.

Catriona Bisset (Peter Fortune) thrived in her return to competition when clocking a swift 2:02.75 to kick-start her 2021 campaign.

With the pacemaker peeling off after 500m, Bisset was left to flex her strength out in front with Brittany Kaan in hot pursuit. Rounding the top bend it was Bisset who found an extra gear, pulling away from the valiant Kaan who finished in 2:04.13.

“I want to run a PB this season, working on my weaknesses and putting it all together,” Bisset said.

“It’s just so wonderful to be out here again after last year, I’m just so grateful.”

Bisset will aim to break the Australian women’s 1000m record in March to raise money for mental health.

The next Australian titles on offer are the Australian 20km Race Walking Championships, which will be held on February 14.