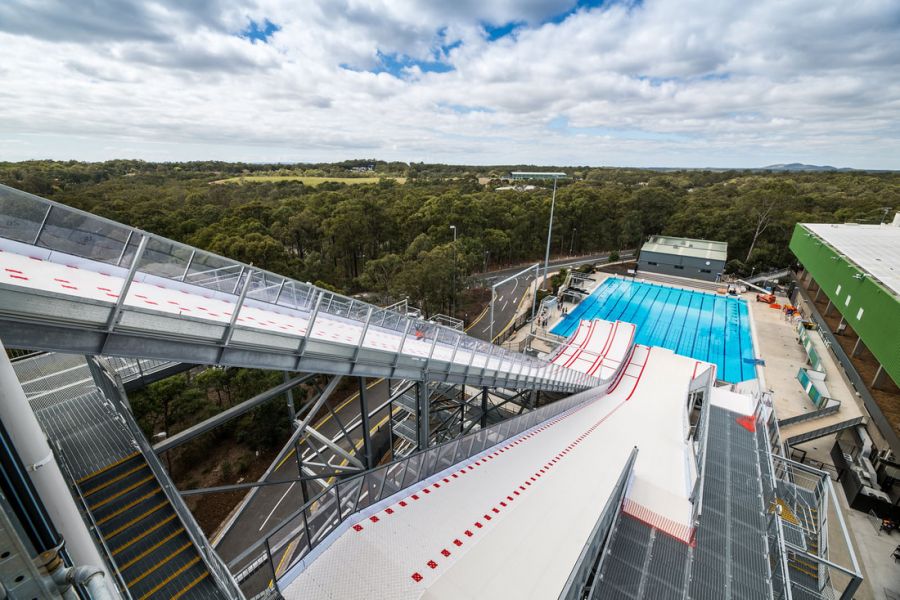 ​Australia’s best aerials and moguls skiers are set to soar through the Brisbane sky as they begin testing the new Olympic Winter Training Centre at the Sleeman Centre.

Australia’s best aerials and moguls skiers are set to soar through the Brisbane sky as they begin testing the new Olympic Winter Training Centre at the Sleeman Centre.

The $6.5 million facility is the first year-round outdoor aerial facility in the world.

A collaboration between the Australian Government through Sport Australia and the Australian Institute of Sport (AIS), Queensland Government, Australian Olympic Committee (AOC) and Olympic Winter Institute of Australia (OWIA),  the new home base for elite athletes will boost Australia’s talent and training pathways to identify and develop the next Lydia Lassila or Alisa Camplin, who grew from junior gymnasts to Winter Olympic champions.

The ‘Flying Kangaroos’ aerial ski team members Danielle Scott, Abbey Willcox, Gabi Ash and Airleigh Frigo are the first to trial the facility, beginning this week with single and basic double somersaults before progressing to larger jumps and more complex skills throughout the testing phase.

From the top of the 37 metre high facility, athletes can reach maximum speeds of over 70km/h and launch up to 17 metres above the water, trialling and perfecting aerial manoeuvres in the safety of the water-landing before transferring them to the snow.

AOC CEO Matt Carroll said he was thrilled to see the project completed and athletes testing the centre.

“It’s fantastic to see this world class facility come to life and have Olympians showcasing their skills in Brisbane,” Mr Carroll said.

“This means Australia’s best talent can be identified, developed and reach their peak performance right here at home, while being close to family and their community.

“Thank you to Minister Colbeck and the Australian Government, and Minister de Brenni and the Queensland Government for working in partnership with the AOC, OWIA and AIS to get a great result.”

“Having a home facility means this is time and funding that can be invested here in Australia rather than overseas facilities, providing greater opportunity to the next generation and bringing Australian sports fans closer than ever to our winter athletes.”

The centre has different jumps to cater for a wide variety of Olympic winter disciplines and experience levels, from beginner to the tallest triple jump.

OWIA CEO and Chef de Mission of the Australian Team for Beijing 2022 Geoff Lipshut welcomed the opportunity to give current athletes a performance edge and help identify and develop the next generation of Winter Olympians.

“This is a huge step forward for athletes at the next Olympic Games in 2022 and importantly for our athletes of tomorrow,” Mr Lipshut said.

“Through our partnership with Gymnastics Australia, this facility creates huge potential for gymnasts to successfully transfer their skills into aerial skiing.

“This facility will provide a great opportunity for many more young Australians from around the country to get involved in winter sport.”

Minister for Youth and Sport Richard Colbeck said the Australian Government was proud to contribute funding to build this world class training base, ensuring ongoing support for our current elite athletes and future Winter Olympic champions.

“Through the AIS and Sport Australia, the Government has invested time, energy and funding into this facility because it will have a lasting impact and be a launching pad for generations of athletes and Winter Olympians to come.

“It’s great to see that a key feature of the facility is the different-sized ramps, allowing athletes to progress right from emerging talent through to those preparing to jump for Olympic gold.

“Our Winter athletes have traditionally been at a disadvantage compared to international rivals, having to travel, train, and compete overseas virtually the entire year. We now have a world-class training environment in our own backyard, which our inspiring athletes needed and deserved.”

Competing at the highest level of winter sport seemed a world away for World Cup gold medallist and dual Olympian Danielle Scott, growing up on Sydney’s northern beaches.

“In 2002 I was a gymnast and surfer who had never skied,” Scott said. “I watched Alisa Camplin win gold at Salt Lake City on TV and thought what an amazing sport.

“Being able to transition from gymnastics to aerials was a pathway I didn’t even know existed, but I’m so thankful as it’s given me incredible opportunities.

“I’m excited to see the local talent that can develop on this new facility, with young Australians able to see aerials in the flesh and know there’s a pathway for them to chase their own Olympic dream.

“This centre is an incredible opportunity for winter athletes to have a home training base and not be at the mercy of other countries – it will really give us an edge.”

Acting Manager of Sleeman Sports Complex Angus Macdonald said the new facility was ideally suited to the complex, which caters to high performance and developing athletes as well as community training.

“This pool was purpose-built for this facility and while it’s wonderful that the community have had access to an additional pool in recent years, it’s great to finally see the facility up and running and watching the incredible skills of these high performance athletes and for our venue to play a small part in Australia’s push for Winter Olympic gold in 2022,” Mr Macdonald said.
“Our complex offers a range of supporting amenities like accommodation, gymnastics centre, a fitness centre, and athlete rehabilitation which will be a great benefit to any teams looking for a comprehensive training camp option, and the proximity to other facilities helps create those development pathways for other athletes that might like to give the sport a try.”

The official opening of the facility is expected to occur in 2021.

Story with thanks Olympic Winter Institute of Australia