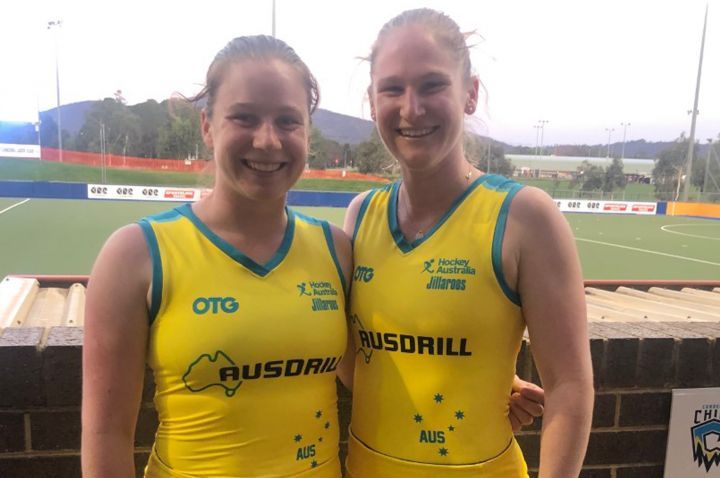 Aisling and Ciara Utri share more similarities than your average pair of sisters – the two are pursuing their hockey career together whilst both attending La Trobe University with the help of the La Trobe Elite Athlete Program (LEAP). La Trobe Sport Media and Communications intern, Tricia-Marie Mifsud, chats to the duo about their sporting journey.

Aisling and Ciara Utri have always been a sporty pair of sisters. Aisling played football growing up, which she later pursued professionally playing for the Western Bulldogs in the AFLW. Ciara on the other hand had a strong interest in basketball and netball.

It wasn’t until Aisling wanted to follow in the footsteps of one of her older brothers that she gave hockey a go and loved it. Whilst a little reluctant to join in, Ciara was encouraged by her mum to also play hockey and ended up loving it just as much.

Aisling and Ciara were never able to play in a same team together due to the age difference between them. It was through hockey that the two were finally able to play alongside each other, forming a close relationship.

For both sisters, one of their proudest achievements so far has been the opportunity to play with the Jillaroos – Australia’s junior hockey team. The opportunity has allowed the duo to travel overseas and play alongside and against some of the most talented junior international hockey players.

“I started two, three years ago; my first trip was to China and we played against China, Germany and Great Britain,” Aisling recalled.

“I’ve been very fortunate, and I absolutely love it just because you get to play with all your friends around Australia. Some of my best hockey memories are from playing in that team.

Ciara added: “Earlier this year I got an opportunity to play some of the games as well. It was cool to play with girls who are good at what they do. I just learnt so much from the team.”

Being able to travel overseas and represent Australia whilst earning a degree was highly valued by both Aisling and Ciara, knowing that one day they may not be able to play the sport they love.

“[Something like] an injury can end your career very quickly, so the balance is very important,” Aisling said.

“For me, I think it is hugely important to have something outside of sport because it won’t always go to plan. But if you have a career there is always something to jump to and from.”

Being members of La Trobe’s Elite Athlete Program has allowed the Utri sisters to commit toplaying high-level hockey while still earning a university degree; an opportunity they both took advantage of. The program provides extra support to its elite athlete students to successfully combine their academic and sporting pursuits, including flexibility around matters like timetabling and assignment due dates.

“La Trobe is known as a sports university, but once you’re in there you realise how much support is provided to student athletes. It provides a reassurance that you know you have your support from both sides,” Aisling said.

“It definitely helps knowing that you’re going to be looked after and they are going to support us with both hockey and trying to study at the same time. It’s been really positive knowing the support is there and accessible,” Ciara added.

For now, the hockey season is on hold due to COVID-19, but the girls are making the most of training opportunities particularly through the Victorian Institute of Sport (VIS).

“We are lucky that we are still currently training through the VIS,” Aisling explained.

“We were overseas when the coronavirus struck Australia, so we came back and had to quarantine. Ciara and I did some Pilates with Mum, and we’re lucky to have a bit of gym set up.

“There’s been lots of isolated running sessions, although the gym work hasn’t been that enjoyable!”

When reality returns, Aisling and Ciara will continue to earn their full degree and masters as well as trying to one day secure a spot playing for the Hockeyroos.

“We’re both driven people, just trying to reach the highest level would be our goal,” Aisling said.

With such determination, talent and the support of LEAP, the dream is more than possible.

Story with thanks La Trobe University