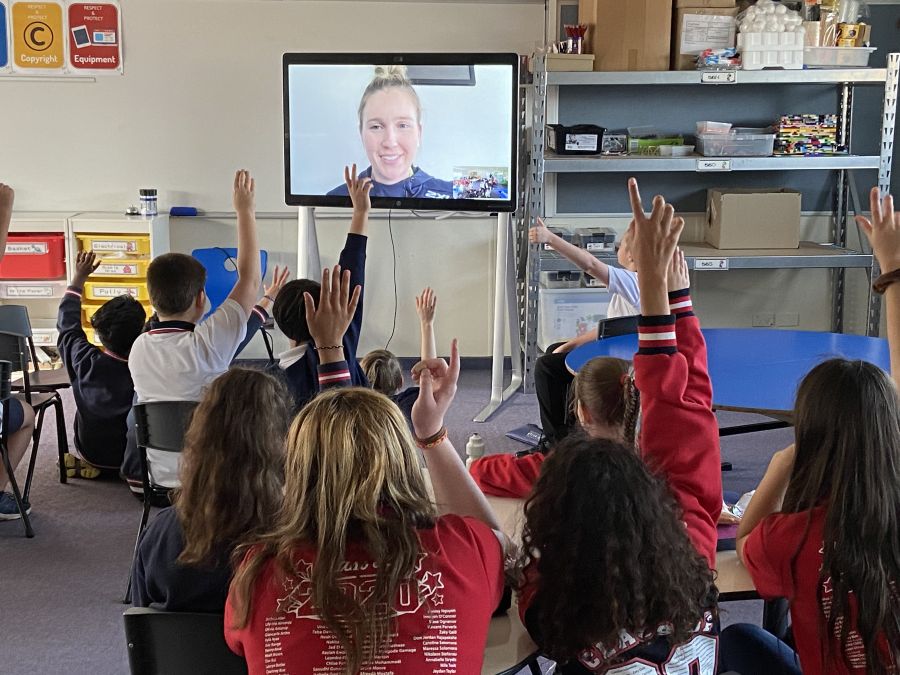 Last week VIS Table Tennis star Melissa “Milly” Tapper spoke to students at Silverton Primary School in Noble Park north via a live video call. The students in year 5 and 6 are part of an Athlete Development program and had watched a pre-recorded video with Tapper before they virtually got to meet her.

Physical Education Teacher Mark Blundell contacted the VIS about the BeFitBeWell program as he thought his students, who all have an extreme interest in sport, would really appreciate being able to hear from an VIS athlete. The students were meant to go on excursions and tours as part of the athlete program but COVID-19 had impacted most of their plans.

The VIS sent Blundell and his students a video with Tapper’s presentation, which she had recorded for the VIS’ virtual BeFitBeWell program. The program is free of charge to government schools and is funded by VIS’ partner School Sport Victoria.

Blundell said that the presentation “was a real hit with the students” and added “they were really surprised and just thought it was brilliant to hear from a ‘real athlete,’ rather than me, so I was told!”

Blundell and the VIS coordinated a follow-up live chat with Tapper, which the students at Silverton PS were “even more excited about” according to their teacher. The students prepared questions for Tapper and they were interested in knowing everything about her athletic career and life; from why she started playing table tennis, to what motivated her and if she had ever been bullied for doing things her own way.

One of the students even wanted to know if athletes got free room service at hotels. The student had seen this once in a movie and was dying to know if it was true!

Tapper was thrilled about that question, which was one she had never had before. She revealed to the students that room service was only free at a (Olympic or Paralympic, Ed.) Games hotel but “unfortunately” not at common hotels.

“The students questions worked really well,” Tapper said. “The kids were excited when it was one of their questions.”

Tapper had her doubts about doing live video chats but was much more comfortable with it after she had participated in a couple of different live chats with schools.

“It is a different experience for sure, but the fact you can still see one another is so important, and my technology skills have definitely improved.” She said.

Originally from Hamilton in country Victoria, Tapper suffered a brachial plexus injury at birth which resulted in Erb’s Palsy, a paralysis of the arm caused by injury to the upper group of the arm’s main nerves. In 2016 Tapper created history when she was the first Australian to compete in both the Olympic and Paralympic Games.

It meant a lot to Tapper that she was still able to engage with school students through the BeFitBeWell virtual program.

“It still gives me the opportunity to positively impact students’ lives in some aspect and for me that’s a win!” She explained.

The 2018 Commonwealth Games Gold medalist (TT6-10) has perfected the way she tells her story of resilience. One of the moments she likes to share with students is when she first went to a major international competition and saw armless Paralympic table tennis player Ibrahim Hamadtou compete. She explains to the students how he mastered to serve with his foot and remembers how amazed she was by every para athlete in that stadium’s ‘ability’ rather than their ‘disability’.

Through the VIS’ community programs, Tapper has been able to inspire thousands of students from primary, secondary and specialists’ schools across Victoria since she came on scholarship eight years ago.

Blundell said that his students had been so excited leading up to the live chat but even more so afterwards. One of the students had even cheered: “Oh my god! What a once in a lifetime experience”. Blundell explained.

“I couldn’t believe we went for nearly 1 hour! That is a long time for this group of energetic ‘athletes’ to sit and listen, but such was their engagement they didn’t even realise how long the session went for.” He said.

“No doubt your fan base has increased from today Milly, these students will now follow your career with great interest.” Blundell added in his feedback to Tapper and the VIS.

The program is funded by School Sport Victoria and has been running for almost a quarter of a century. It’s free of charge for Government schools, whilst Non-Government schools can also participate in the program for a fee, which is used to help support the athletes.

Since it commenced as “Sports Persons in Schools” in the mid-1990s the BeFitBeWell program has helped elite athletes develop their career outside of sport by improving their presentation skills, while also supporting them with a modest income flow.

Following the developments of COVID-19 the VIS transitioned the BeFitBeWell program from physical visits to a virtual program that now consists of pre-recorded presentations from the athletes as well as a live video chat.

The pre-recorded videos available to Government schools feature Olympians and Paralympians from a range of sports. The videos are targeted at different year levels and covers different topics from primary school students to Year 11-12 students preparing for exams.

The key message of the program is how physical activity is linked to mental wellbeing, hence the name, ‘BeFitBeWell.’ This is a message that the athletes always relay to the students no matter what other topics they might cover.

If a school is interested in the program they can contact the VIS reception on +61 3 9425 0000 or email reception@vis.org.au.