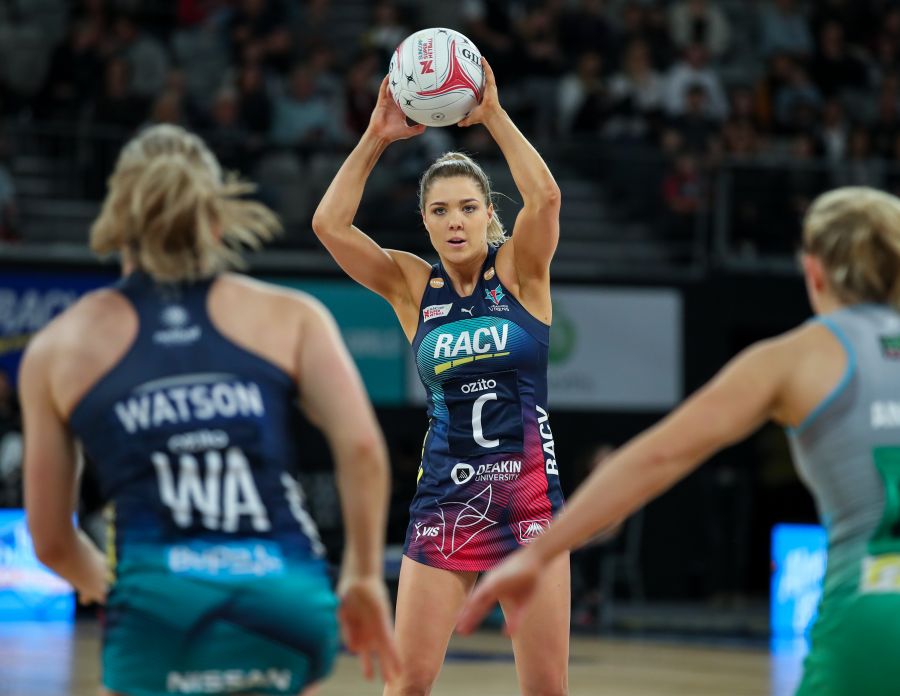 Kate Moloney’s strong mindset has got her through the long period of training in isolation and she is as motivated as ever to get the Vixens ready to content for another Premiership. While embracing the slower lifestyle, she leaves no doubt that she will return in the best possible condition and she can’t wait to train with her teammates again on court and at the Victorian Institute of Sport.

Saturday 2 May was circled in Moloney’s diary, and had been for a while since the Suncorp Super Netball first round was announced in November last year. When the first weekend of May came, Moloney was in the same position she had been for the past five months; in preseason.

The 27-year-old has captained the Vixens for the past three seasons and has come through Netball Victoria’s development programs. In summers, VIS athletes are used to seeing and hearing Moloney as she leads her Vixens through their grueling preseason conditioning sessions. The other athletes are never in doubt when the Vixens are in the house.

“It has certainly been different for us Vixens, we went from being in the peak of our preseason to training in isolation,” she said.

The Vixens would normally train at the Victorian Institute of Sport (VIS) for their physical preparation and at the State Netball Hockey Centre for on-court training.

“Being part of a team sport, we do all of our training session together on a daily basis, so there has certainly been some adjusting going back to individual training”.

Following the shutdown of facilities, Moloney spent the first few days at her apartment before she moved to her parents’ home in Diamond Creek. The added space allowed her to set up a gym and provided her with a much bigger backyard to get through her conditioning sessions.

The VIS equipped Moloney and her teammates with the most necessary gym equipment and her dad built her a bench press.

Moloney and her Vixens also received help from a former teammate.

“Renae, living in Utah (USA) at the moment, offered up her equipment from her home gym in Melbourne,” Moloney explained.

“Renae and Joe have been amazing. Their generosity alongside the VIS has enabled all off our squad to be decked out with the equipment needed to continue both our strength and conditioning sessions.”

On top of getting their home gyms sorted, Moloney and her Vixens has formalized Zoom sessions daily at 8.45am with Coaches McKinnis and Sharelle McMahon, and Strength and Conditioning Coach Tascone.

“These session are an opportunity for us to connect with each other and for Simone, Sharelle and John to chat through our training plans for that day. These will either be S&C based from John or Netball specific session from Simone & Sharelle,” Moloney said.

Coaching footwork in netball is an essential part of these super coordinated athletes’ game but also something that was difficult to imagine being taught remotely.

McKinnis found a way to train the Vixens’ footwork through video sessions and according to Moloney these sessions have been just as hard as on the netball court.

“Simone has definitely made us all sweat – even when she coaches us remotely!” Moloney laughed.

Training from home and being coached remotely has made Moloney realise what is possible and the team has had no problem staying connected during COVID-19.

“To be honest not training together has been weird, but we are really lucky that we had a lot of communication platforms set up and we chat daily. Whether that be on Snapchat, WhatsApp or Facebook,” Moloney added.

While there is no doubt Moloney would rather be playing netball at this time, she cherishes the downtime and it has reminded her of the importance of slowing down.

“One of the things that I would like to take with me from this experience is to make sure to take a moment for myself,” she reflected.

“This time has made me realise how lucky I am to be doing what I’m doing”.

There is no doubt about Moloney’s qualities as a leader and role model and she has continued to inspire young aspiring netballers to stay active during school and sport lock downs.

From ‘Monday Motivation’ pieces on social media to producing online sessions for the students she coaches at St. Helena Secondary College’s Netball Academy, she has made the most of this unprecedented time.

Moloney credits the staff at Netball Victoria and the VIS for stepping up during this challenging period and supporting their athletes.

Along with Super Netball League’s best players she has taken a 50% pay cut, a move that has guaranteed the game’s long term survival.

It has now been over 240 days since the Vixens last game and Moloney is hopeful the season will start no later than August. At that time the Vixens will have been in preseason for eight months!

At time of publication the Super Netball league, following recent government announcements, advised clubs that no team training can be held as of yet and that athletes are to continue their 12 hours of individualised club training per week until 31 May.