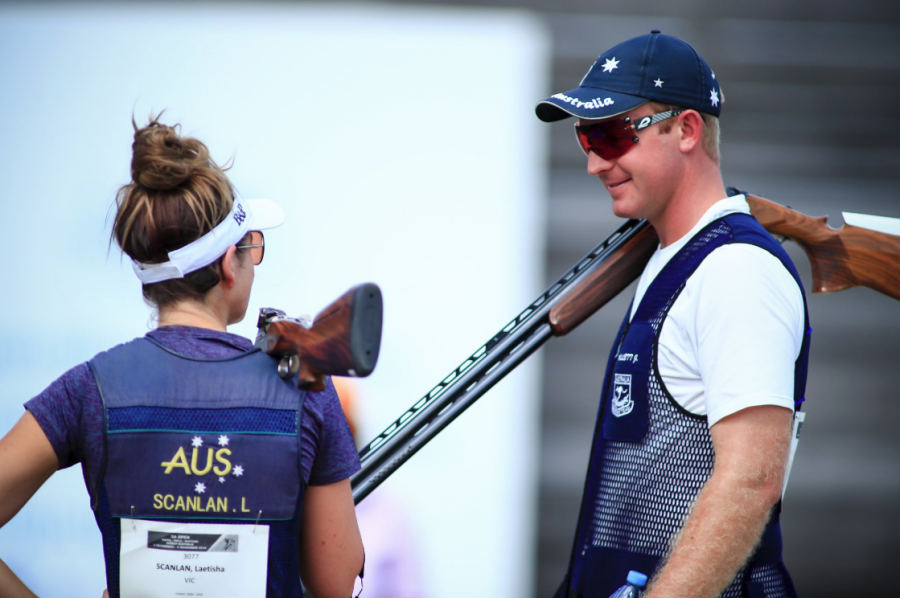 Victoria will be heavily represented in the Australian Shooting Team selected by The Australian Olympic Committee. VIS Shooting athletes will make up a third of the team set to compete at the Tokyo 2020 Olympics to be held in 2021.

Three VIS trap shooting athletes and two pistol athletes was announced on the Australian Team on Friday morning. Penny Smith, Laetisha Scanlan and James Willet (VIS/NSWIS) will compete in the trap, while Sergei Evglevski and Elena Galiabovitch is set to compete in the pistol event.

The team was selected after four nomination trial events from January to March 2020. With Australia’s rich history in shooting the trials were as competitive as ever and especially in the women’s trap event world class Victorian shooters were battling for the elusive Olympic spots.

Penny Smith topped an incredible strong field including fellow VIS scholarship-holders Laetisha Scanlan and Catherine Skinner. Smith and Scanlan are currently ranked 10th and 11th in the world respectively and many will remember Skinner’s sensational Gold medal at the Rio Olympics in 2016.

Smith is ecstatic to make her Olympic debut next year.

“Making the Tokyo Olympics is a lifelong dream come true,” Smith said. “This is such a special moment not just for me, but my mum who’s my biggest supporter, my family, coaches, support staff and the whole Shooting community.”

“Women’s Trap is so competitive in Australia and I’m so proud to have won the nomination trials and make the Olympic Team.

When Smith is not travelling around the world for ISSF events, she resides in Bookar in Western Victoria and have grown up in a family that was very into Equestrian. Her mum was even a groom for seven-time Olympian Andrew Hoy at the 1984 Los Angeles Olympics.

“I’ve got nothing to lose in Tokyo. I just want to soak up the experience and make my country and family proud." Smith said.

Pistol shooter Sergei Evglevski also has strong Olympic family ties. Evglevski’s mum is the six-time Olympian Lalita Yauhleuskaya’s, who represented both Belarus and Australia. Evglevski was born in Belarus in 1997, a year before his family moved to Australia. When he was just a toddler, his mother won bronze at the Sydney Games.

As a 20-year old, Evglevski won silver in 25m rapid fire pistol at the 2018 Commonwealth Games and in 2019 he was named as the Australian Flagbearer at the 30th Summer Universiade in Napoli, Italy.

In the pistol event Evglevski will be joined by Elena Galiabovitch’s, who will become a two-time Olympian.

2018 was a career year for Galiabovitch when she claimed bronze in the 10m air pistol on the Gold Coast. The Melbourne-based doctor showed nerves of steel to snare Australia’s first shooting medal at the Belmont complex in Brisbane, in her first international final. She topped that with a silver in the 25m pistol.

In Tokyo the Mixed Team trap event will make its debut and the VIS’ Laetisha Scanlan and James Willet (VIS/NSWIS) will be the team to beat.

The dynamic duo won the 2019 World Championships and with both Scanlan and Willett set to make their second Olympic appearance they will be hungry to add an Olympic medal to their tally.

Scanlan is the defending three-time Commonwealth Games Gold medallist in the Women’s trap.

Willett won Gold at the 2019 Shotgun World Cup in Mexico where he also equalled the world record. He finished fifth at the 2016 Rio Olympics narrowly missing out on the bronze.

The VIS’ Shooting Performance Support Manager, Nicky Frey is both extremely proud of the VIS’ athletes selected in the Team and those who narrowly missed selection.

“Our athletes prepared very well for a highly competitive nomination series that produced many outstanding results. We now have our athletes on the Team for Tokyo and also those who start to look toward Paris.”

A ‘Tokyo Ready’ camp was held at the VIS’ complex in early 2020, which launched the Shooting athletes’ Olympic preparation and campaign. The camp was a collaboration between Shooting Australia and the VIS.

“Tokyo Ready provided athletes with information about the Tokyo environment, the chance to experience Tokyo heat and humidity via our heat chamber and commenced the training plan conversations to assist athletes be at their best come Games time.” Frey said.

“With the Olympics now 15 months away, we have time to continue and refine these plans.”

The Australian Shooting Team announcement takes the number of selected VIS athletes for the Tokyo Olympics up to 10, with athletes already set to represent Australia in track cycling and sailing.