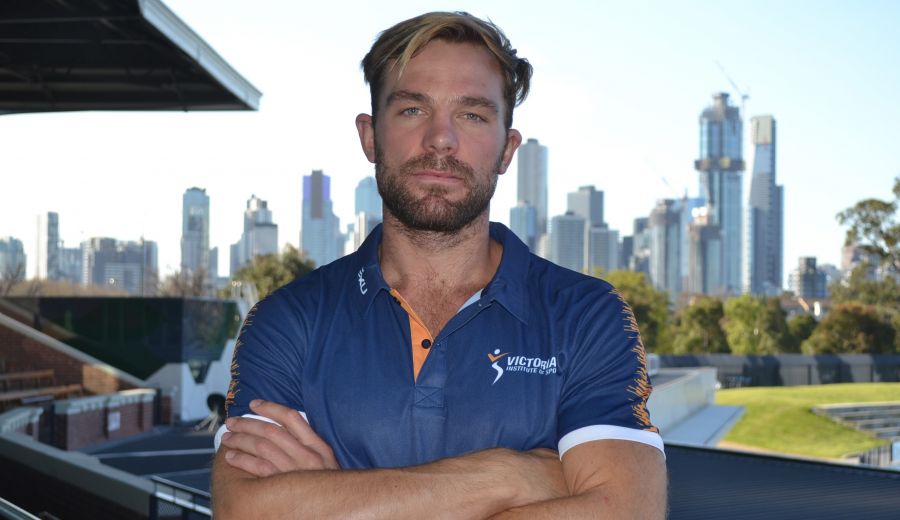 Victorian Institute of Sport rower Josh Booth was gunning for a third Olympic Games when the developments of COVID-19 shifted his plans. With a degree in medicine Booth wanted to help where it was needed the most and is now starting his medical internship at the Royal Melbourne Hospital.

A native Melbournian and long-time VIS scholarship holder, Booth was aiming to add another medal to his silver from Rio 2016 and had dedicated the last four years to reach peak condition in time for Tokyo.

The 29-year-old graduated from Medicine at the University of Melbourne in 2018 and with plans of competing at the Tokyo Games, he deferred his medical internship until January 2021.

Booth relocated to Rowing Australia’s Training Centre in Canberra to continue to row for Australia and begun a Ph.D. at Canberra Hospital/Australian National University. Impressively, he has been completing his Ph.D. concurrently with training and competitions.

A testament to his leadership, Booth was appointed to the AIS Athlete Advisory Committee (AAC), which makes recommendations to the AIS and Australian Sports Commission Board about the direction of Australia’s high-performance sport.

When the doubts of the viability of the Games was rising, the AAC wrote a letter to athletes urging them not to be “overwhelmed” by the uncertainty around their future and to ensure their mental health was a top priority.

Being a two-time Olympian, Booth has learnt how to overcome challenges and deal with high pressure situations. He's also found a way to adjust to the uncertain circumstances. For now, he is ready to dedicate himself to his medical career and help where it is needed most.

We caught up with Booth for his reaction on the current situation.

VIS: What was your initial reaction to the postponement of the Olympic Games?

JB: I think most of the rowing athletes, myself included, were expecting a call to be made regarding the cancellation or postponement of the games, so I wasn’t surprised. I certainly felt that holding the Olympics in the current global climate would have been inappropriate, whilst important, the health and livelihoods of our families, loved ones and communities take priority. In that sense I was relieved and glad that the global Olympic movement realised that sport was not a priority, and potentially harmful, in these times.

VIS: What does the postponement of the Olympic Games to 2021 mean for you?

JB: There is so much uncertainty in the world right now and I feel that everyone on earth will be faced with a gamut of decisions once this current wave of COVID-19 passes; whole economies, whole industries, whole societies will be changed. Obviously, the postponement of the games has altered my plans for this year and the next, so I will need to see what is possible with my studies and my career - how I can rearrange things, how I can balance them.

VIS: What will your training and preparation look like in the near future?

JB: Again, there is so much uncertainty. Especially regarding how long the current pandemic will last and how long drastic measures need to be taken to contain it. The answers to these questions will ultimately determine what my preparation looks like. For now, we have been given equipment to take home: a rowing machine, watt bike and some weights. My training will involve a lot of makeshift training in the comfort of my garage!

VIS: What made you decide to shift your focus to your medical career at this stage?

JB: With the increased demand on hospitals and for medical staff due to COVID-19, I considered how I could help. I heard there was a need for junior doctors in Melbourne and I approached the Royal Melbourne Hospital. I have been able to take up an internship, as they had positions to fill. To me it also feels like a really positive move - to feel helpful and useful. So, in a sense regardless of Olympic aspirations or having a successful medical career, it felt like the right decision.

VIS: What plans do you have for Tokyo next year and when things return to normal?

JB: I haven’t made any hard decisions about the future. I want to have every option I can when the time comes. Although Tokyo was always the plan and I have dedicated a fair amount of energy and hard work into qualifying and preparing for it. When things return to normal and things start back again, I hope I can and will be in a position to compete at Tokyo.