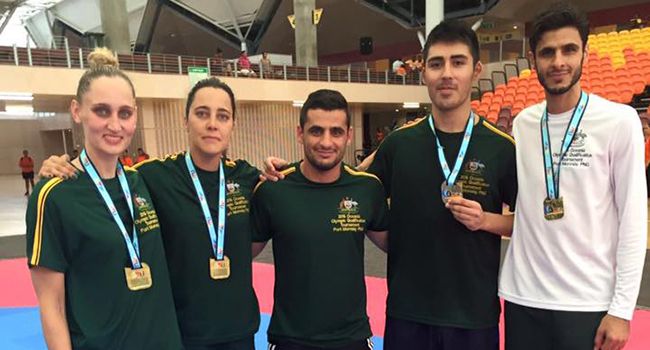 The Rio Olympics will have a distinctly family feel for taekwondo sisters Carmon and Caroline Marton after the AOC confirmed their places on the Olympic team last Friday.

A VIS athlete since 2002, Carmon won her way to her third Olympic team when she won her -67kg division at the Oceania Qualification Tournament at the end of February. Caroline Marton’s years of preparation culminated in a spot on the Rio team when her division went uncontested at the qualifiers in Papua New Guinea.

The sisters will be joined by Carmen’s partner Safwan Khalil and close friend Hayder Shkara, after they too were selected to the Australian Olympic Team last week.

“Qualifying was an unbelievable experience and was the culmination of four very hard years of preparation,” Caroline said.

“You always dream about representing your country at the Olympics but you never think you’ll prepare alongside and then eventually get there alongside your family,” the 31 year old, who will contest the -57kg competition, said.

Carmen came so close to winning a medal at the London 2012 Games and eventually went on to become Australia’s first world champion in the sport in 2013. The 2016 Games will be the perfect chance for her realise her dream and jump onto the Olympic podium.

“I never forget walking off the mat in that bronze medal match in London and being devastated. It was a really defining point in my career.

“From then I made the decision in my heart to go for the gold medal in Rio which has been my focus and I’ve been working really hard to make that dream come true.”

Carmon will also draw inspiration from her sister’s success.

“Knowing that Caroline was so close for London and now this time she’s made it is incredibly motivating. We’re all really hungry and it’s a very positive team environment.”