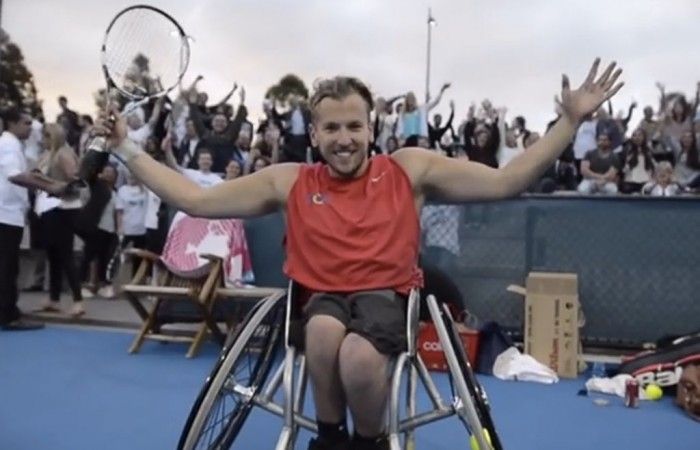 Dylan Alcott has topped off an exceptional year, being awarded the Victorian Institute of Sports’ (VIS) most prestigious Award of Excellence at tonight’s ceremony.

Alcott is the first wheelchair tennis athlete to receive the coveted award and only the second ever paralympian.

The award honours athletes who have achieved outstanding sporting results during the year, while contributing to the promotion and development of their sport. It is the pinnacle of VIS Awards.

This year has seen Alcott rise in the world rankings to no. 1 after he took out the title of US Open Wheelchair Quad singles tennis champion and won the Australian Open Wheelchair Championship.  He also had six other tournament victories leading him to become the world’s highest ranked player.

Alcott is no stranger to success. As a wheelchair basketball player he won a Paralympic gold medal at the 2008 Beijing Paralympics alongside his Australian Rollers’ teammates.  Alcott only made the switch to competitive wheelchair tennis in 2014 making his meteoric rise that much more impressive.

Sharing the stage with Alcott were other well known current and former VIS athletes.

Former VIS athlete and three time Award of Excellence winner Catherine Freeman received the Frank Pyke Award for her long and successful sporting career, teamed with positive achievements in other areas of her life.  This award reflects the VIS motto, “Success in Sport and Life” over the span of the athlete’s career.

400m runner Freeman won one of Australia’s most memorable gold medals in front of her home crowd at the 2000 Sydney Olympic Games, capturing the hearts of the nation in the process.  The three-time Olympian is also a two time world champion in the 400m and a four time Commonwealth Games gold medallist across several events.

Freeman established the Cathy Freeman Foundation in 2007 and continues to be an ambassador for it.  The Foundation works to reduce the educational gap between non-Indigenous Australian children and children living in remote indigenous communities.

In recognition of her achievements Freeman has received many Australian and international awards including  Australian of the Year, Medal of the Order of Australia , Laureus Sportswoman of the Year and recently the IOC Women and Sport Award for the Oceania region, for her works through her Foundation.

Para-canoeist Amanda Reynolds was presented the elite athlete with a disability award for achieving exceptional results in her sport throughout the year including winning a world championship, in addition to success in other areas of her life.

Women’s hockey athlete, Rachael Lynch received the William Angliss personal excellence award for achieving success in her studies and nursing career while continuing to be successful on the world sporting stage in her role as goal keeper with the Hockeyroos.  This award recognises Success in Sport and Life.

Para-cycling young gun Alistair Donohoe was awarded the 2XU Youth Award for his outstanding sporting results during the year which included world titles on both the road and track.