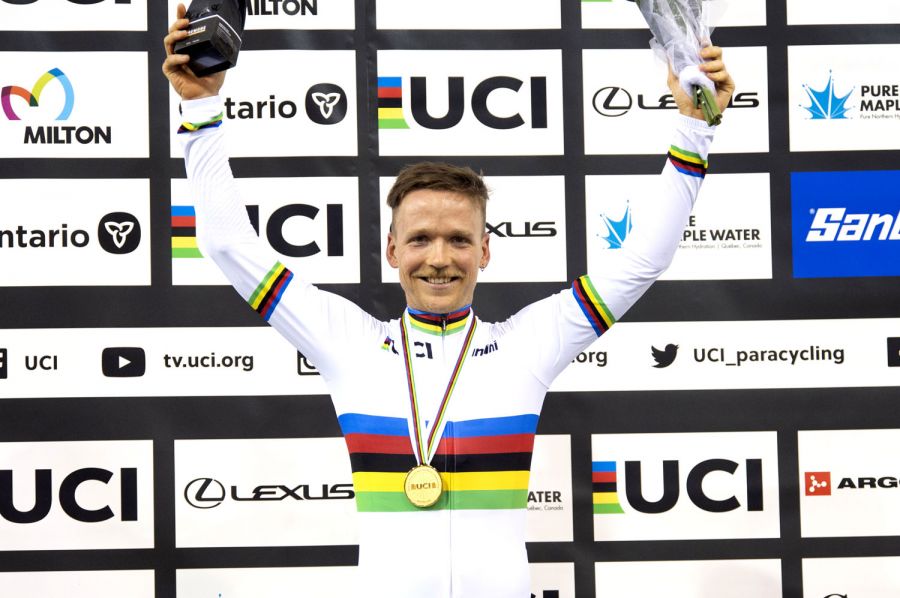 Victorian Government school students can look forward to be inspired by the amazing story of Paralympic medalist and professional cyclist Alistair Donohoe. The video is part of the Victorian Institute of Sport’s virtual school speaker program Be Fit. Be Well, which continues to encourage students to stay active and lead a healthy lifestyle.

When Victorian school students moved to remote learning In March, the Victorian Institute of Sport (VIS) supported by School Sport Victoria (SSV), wanted to keep connecting athletes with school students. Since the virtual Be Fit. Be Well program launched in May more than 3000 students from 38 schools have participated in the program.

Eight videos from world class athletes have already been distributed to schools in term 2 and 3. With the start of term 4, Victorian Government school students can now look forward to the video presentation with two-time Paralympic silver medalist, Alistair Donohoe.

At the age of 25 Donohoe has already established himself on the world para-cycling stage and has his sights set on the Paralympic Games next year. Originally from Nhulunbuy, Northern Territory, Donohoe is an eight time world Para Cycling champion and most recently, gold medal winner in the Men’s C5 scratch race at the 2020 Para Cycling Track World Championships in Canada.

One of the VIS’ most inspirational figures, Donohoe has been through more in his life than most people will experience in a lifetime. At only 11 he lost his father to a freak electrocution, which resulted in his mum pretty much single-handedly raising five kids on her own. It is no surprise Donohoe’s mother is also his biggest inspiration.

At 14 Donohoe once again proved his perseverance after suffering a major injury to his right arm. Donohoe was jumping from a tree into a cliff as the rope got caught around his arm. The injury resulted in 90 percent of his right triceps and 70 per cent of his right bicep being damaged – causing major radial nerve damage.

This injury didn’t stop him. He continued to play sport. He did everything and anything including athletics, gymnastics, rugby and triathlon, but it was cycling that he was most fascinated by.

Four years after his major injury, Donohoe made his international debut at the 2013 UCI Para-cycling World Championships, at the age of 18. He won bronze medals in the time trial and road race and he hasn’t looked back since.

In the Rio 2016 Paralympic Games Donohoe had already won two silver medals but wanted to go all the way and win gold. With one race left, Donohoe was in strong contention for his first Paralympic gold medal but a sensational collision with Ukraine’s Yehor Dementyev in their sprint to the finish saw both men miss the podium. He is now aiming to convert his silver medals into gold at next year’s Paralympic Games.

Donohoe has shown that he also has the talent to compete in elite cycling, with strong results against some of the best in the world at the 2019 Herald Sun Tour. He currently rides for ARA – Pro Racing Sunshine Coast and has been based up in Queensland for the duration of the COVID pandemic.

The 15 - 40 minute online presentations are aimed at different year levels from Primary School students to Year 12. Live video chats with athletes are also available through this program and can be set up to suit schools and students’ learning needs.

Be Fit. Be Well is free for Government schools and is supported by School Sport Victoria.

The program is open for term 4 and to register your school contact VIS Reception on telephone +61 3 9425 0000 or via email reception@vis.org.au. Click here for more information.

VIS athlete speakers are also available to non-Government schools and can be booked at competitive rates.