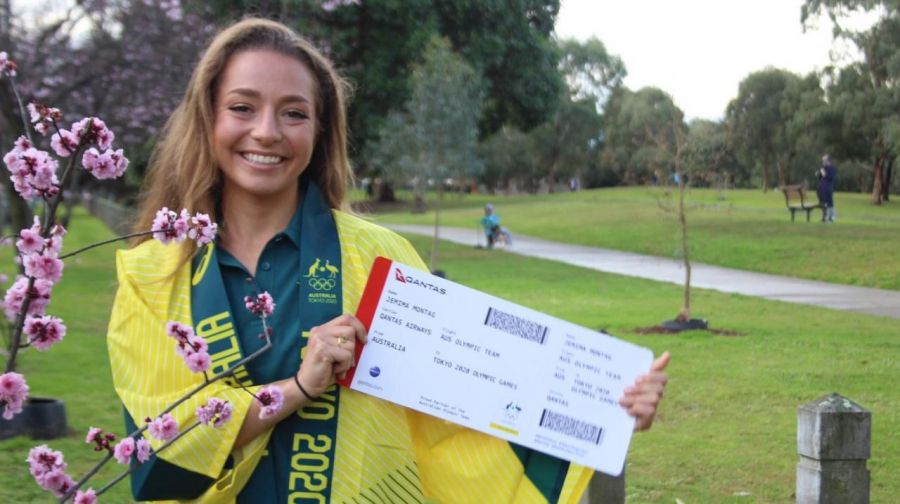 After being selected for Tokyo 2020, Victorian Institute of Sport scholarship holder Jemima Montag can now also add IOC Young Leader to her resume after being chosen from a pool of 3,000 applicants for the prestigious program.

The programme, supported by Worldwide Olympic Partner Panasonic, aims to empower young people to develop their own sustainable sports-based social business in response to a pressing local issue.

As one of 25 of the programme's Young Leaders, Montag's goal is to increase the participation of women and girls in physical activity by addressing the reasons why so many stop playing sport.

“Growing up as a young sporty girl I was really lucky to be surrounded by an active family and to attend a school that was really encouraging and fostered all my athletic passion,” Montag said.

“But having that foundation also made me acutely aware of the drop off in adolescent girls participating in sport. From the onset of puberty and in later high school years when PE lessons were not compulsory, the number of girls competing in sport and physical activity dwindles.

“That was really interesting to me, because I had always loved sport so always wanted to address what it was that caused the drop-off, whether it was frustration or confusion of young girls who are at an age where their bodies are changing and there isn’t enough information about how to factor health and physical activity into that,” she continued.

Through her research, Montag discovered three barriers that are preventing or discouraging girls and women from participating in physical activity.

“One of the biggest barriers was around appearance and judgement,” Montag explained.

“And this comes from the types of uniforms women and girls are expected to wear when competing in sport.

“As an example, even though it’s a winter sport, girls and women who play netball are expected to wear these tiny skirts and dresses. They’re shivering on the court while parents and spectators are rugged up in big jackets, drinking a warm coffee.

“Then there are issues around the tight clothing women and girls need to wear for things like swimming and water polo. Young girls who aren’t yet comfortable in their bodies, don’t want to wear a tight, high-cut swimming costume when they are menstruating, so what I am trying to encourage is more choice in what girls and women can wear when playing sport,” she continued.

“If they want to wear board shorts in the pool for swimming lessons or warmer pants for netball, I want them to be able to have that option.”

Montag said the second barrier was around perceived ability.

“There is this idea that compared to boys, girls aren’t fit enough or good enough, they don't know the rules and they’re just not confident in their ability to give it a go because they haven’t had the same foundation young boys have had where their athletic and competitive sides are nurtured,” she said.

“Boys grow up knowing how to kick a ball and play football, because they've had pathways from an early age, while so many girls have this real insecurity because they may not know what offside means in soccer, or they think they’re not going to be able to hit a ball out of the park, or whatever it may be.

“The final barrier I discovered, was prioritization,” she said.

“This issue relates more to women, and it’s about feeling like that shouldn’t be prioritizing physical activity when there are other things they feel like they should be doing, like taking care of the kids or organizing dinner.

“Blocking out two hours of your morning to go for a nice run or do some weights seems selfish and that’s something we really need to change.”

As part of the four-year IOC Young Leaders Program, Montag has been awarded CHF 10,000 (Swiss Francs) in seeding funds to build a business that will tackle her issue of focus.

Montag wants to use the funds to develop a program that involves state government, schools and potential sponsors.

“I've already started a few conversations with people like Dr. Bridie O'Donnell who heads the Women and Girls in Sport and Recreation organisation and looking to talk to the CEO of VIC Health Sandro Demaio who does the ‘This Girl Can,’ campaign,’ but the idea is that I’d contact people within the state government and seek funding so that schools could access a program to increase participation of girls in physical activity,” she said.

“It would target every school so that no one misses out and involve learning and education, from athlete guest speakers to doctors, scientists who specialise in women’s health, dietitians, psychologists and trainers.

“The program would ideally also encourage physical movement, whether it be a before or after school activity at a local park or school ground and a healthy meal afterward, something low-key where the girls can be comfortable to come in trackies, get their bodies moving and connect to a community.”

Montag, whose passions also extend into charity work around sustainability and environmental causes, says she is grateful that she has the platform to share these issues and promote change.

“Having the athlete voice microphone is really exciting and it's an opportunity that I don't want to waste,” she said.

“I'm really excited to kick it off, especially with this opportunity I’ve been given with the IOC Young Leaders Program.

I want to do all I can for the little girls who were in my shoes, who dream of becoming an Olympian and for the girls who just want to make some friends and have fun.

“I think participating in sport at any level, is really life-changing. It’s so important for your health and wellbeing and I hope that with the platform I’ve been given by the IOC and as an elite Australian athlete, I can build a program which leads to an empowered generation of young women.”